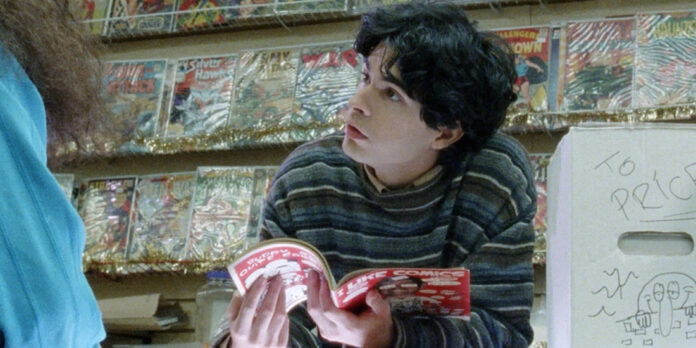 ​​While A24 churns out countless coming-of-age films every year, it’s amusingly expected to at some point describe one of them as “Safdies meets ‘Napoleon Dynamite.'” Such a description pretty much sums up “Funny Pages,” a grimy tale of a young cartoonist wanting to make it on his own. While that setup may sound mundane, “Funny Pages” is an absurdist, awkward film that offers a unique take on a relatively predictable genre. As a veteran of the coming of age genre, director Owen Kline (the kid from “The Squid And The Whale” making his feature directorial debut here) may have been uniquely suited to tackle this story of a young artist searching for his voice. It’s nostalgic and retro in its aesthetic and lens of the world but almost too weird to a fault. If cringe comedy isn’t your thing, stay far away from “Funny Pages.”

With few markers to tell us the time period, “Funny Pages” seems like a story out of time as it looks like it takes place in the early 2000s, but it’s perhaps timeless in its execution. With run-down cars, little technology, and plenty of retro underground comics for the characters to drool over, it’s a carefully crafted vibe to develop angst in our main character. Robert (Daniel Zolghadri) is a promising artist with skills beyond his seventeen years. His art teacher believes he can make it professionally as a cartoonist, seeing promise in his perverse, overtly sexual comics. The teacher exposes himself to Robert, wanting the student to get more practice drawing the male form. Robert doesn’t seem bothered, at least not until his teacher makes it uncomfortable. After leaving the scene, a mere moments later, Robert’s teacher dies in front of him, thus sending him spiraling into a journey of self-discovery. Despite his parents’ wishes, Robert is determined to become his own man and doesn’t want to be weighed down by school or other obligations. With a bit of money from his job at a comic store, he finds a gross, illegal “apartment” (It’s more like a damp basement section than an actual apartment) to share with a few bizarre older men.

It becomes apparent quickly how fascinated Kline is by the faces of his characters. There are no “movie star” faces here, or at least the film does an excellent job of hiding them. Each new eccentric (or insane) side character that pops into the story has an odd blend of looking unique and utterly ordinary, like Robert’s best friend Miles (Miles Emmanuel), who has long, frizzy hair, a face full of acne, and an uncomfortable demeanor. Or Mitchell Wenig, a favorite of producers Benny & Josh Safdie (cue Adam Sandler yelling “Oh this fucking guy!” from ‘Uncut Gems‘), is a delightfully strange presence whenever he’s on screen. Even Andy Milonakis shows up as a regular in the comic store. Kline captures everyone with a raw, unfiltered eye, usually in extreme closeups. It echoes how Robert sees most people as vessels for his hilarious, outlandish comics.

Though it’s a common trope for the genre, Robert’s decisions quickly shift from embarrassing to dumb. When he meets Wallace (Matthew Maher), an obviously unstable individual in legal trouble, Robert sees him as a potential mentor just because he used to be a color mixer in the comics industry. Robert’s driven by the desire to be a starving artist, and as a result, his suffering is almost intentional. The escapades with Wallace begin to be off-putting rather than funny, especially as his living situation becomes untenable. It doesn’t help that Robert is a perfectly unlikable person; arrogant and, quite frankly, a naive jerk. While the movie clearly knows this, it still makes for a frustrating viewing experience as we’re unable to ever emotionally latch onto Robert and care about him as a protagonist.

Blending mumblecore, cringe comedy, and some intentionally messy aesthetics, “Funny Pages” definitely will not be for everyone. There are poignant observations on growing up and trying to become a real artist, but those statements are often stunted by the lack of character growth and a truncated third act. Perhaps Kline didn’t want to leave the audience with an inauthentic lesson about growing up. While many viewers may be absorbed by its down and dirty, stressful “Safdie” vibes, “Funny Pages” is just a hair too off-putting to enjoy.

Powered by JustWatch
Share
Facebook
Twitter
Copy URL
Previous article
Initial Thoughts On “House Of The Dragon”
Next article
Remakes And Reboots And Re-Dos, Oh My!