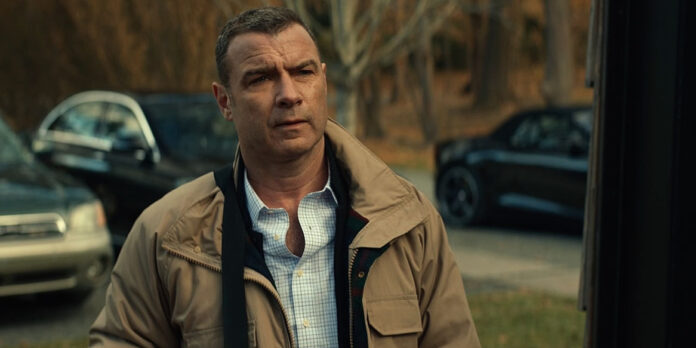 THE STORY – The lives of two families collide when their children begin a relationship and it leads to a tragic accident.

​​​Stories about how the enormously rich individuals of the world clash with those of fewer means are nothing new in our society. If anything, that sharp conflict has only risen in popularity, and it has given rise to a host of filmmakers looking to give their own perspectives on these themes. The results are as varied as the people who attempt to execute them, and one can only hope for a resonant theme to connect. “Human Capital” has many decent elements within its structure that ultimately fall short of a truly compelling narrative.

The story here revolves around a group of characters that weave in and out of each other’s lives to varying degrees of influence. First, there’s Drew (Liev Schreiber), a real estate agent who’s drowning in debt and seeks to invest in a hedge fund well beyond his means. That fund is set up by investment banker, Quint Manning (Peter Sarsgaard), who’s dealing with a tumultuous family life with his wife, Carrie (Tomei), and son, Jamie (Fred Hechinger). The children of these two families are dating: Drew’s daughter, Shannon (Maya Hawke), shares her time between Jamie and mysterious loner, Ian (Alex Wolff). All of these people soon become entangled in a tragic event that spawns a greater conspiracy, and many of them will end up being morally tested.

The most well-known commodity amongst the crew is probably Oren Moverman, the Oscar-nominated writer of “The Messenger,” and a slew of other respectable dramas. His script is an odd mixture of effectiveness, with some scenes feeling quite genuine and pointed in their discussions, while many others are flat and quite obvious in their thematic commentary. It’s an imbalance that makes the film lose momentum, particularly through a laborious first act. There’s also a conceit with a jumbled timeline that, while never feeling more than a gimmick, does prove engaging in its ability to keep the audience invested in its mystery. Unfortunately, the numerous plot contrivances don’t help matters, and with so many characters, many do feel underdeveloped. Still, there’s a noble effort from the script to keep things moving in this twisty tale – and it mostly ends up working.

On the other hand, the direction from Marc Meyers doesn’t prove nearly as enticing. It can certainly be noted that his efforts never feel sloppy or misguided, but there’s nothing about the way he assembles this film that seems exceptional either. Meyers lets the script and performances do most of the heavy lifting, and that leaves many of the cinematic elements feeling lackluster. There isn’t any sense of style in the filmmaking here and everything gets presented in a plain manner. This, fortunately, doesn’t detract from the film in regards to poor execution, but Meyers’ contributions never rise above the level of workmanlike and plainly adequate.

Speaking of those performances, they truly are the main focal point of the film given the multiple storylines taking place. As is also the case with large ensembles, there are varying degrees of success in terms of their engagement. The best in show belongs to Sarsgaard, who’s able to capture the smarmy personality of a super-wealthy scumbag without veering into histrionics. There’s a natural charm this character possesses that makes him all the more insidious, and Sarsgaard manages to play these notes to perfection. He makes quite the impression in his scenes, especially the ones he shares with Tomei. While her character isn’t that well developed, the domestic drama that plays out between the two features some genuinely fine turns from her. This is the strongest section of the film and that’s mainly due to their performances.

Schreiber’s performance is good, but he never truly delivers anything extraordinary here. Unfortunately, because the plotlines that involve the younger characters feel the most tedious, it means that actors inhabiting those roles don’t really make the most meaningful connections. Obviously, actors like Hawke and Wolff have been brilliant in previous work, but there they are saddled with shallow characters that are the most directly tied to the film’s rather uninteresting plot mechanics. They do their best with what they’re given, but sadly, it’s material that doesn’t serve their talents; and for that, they end up getting lost in the shuffle.

There are some fine performances in the cast that make an impact, and some elements of the script make a genuine emotional connection; however, there’s also plenty of actors in this ensemble that don’t make the most of what they’re given and more elements of the script come across as tired and flat. Not to mention the mediocre filmmaking on display as well. “Human Capital” is a nice attempt at creating a story that could have significant resonance to our times, but it all ends up feeling like the whole is significantly less than the sum of its parts. That’s a shame, given the enormous talent involved.