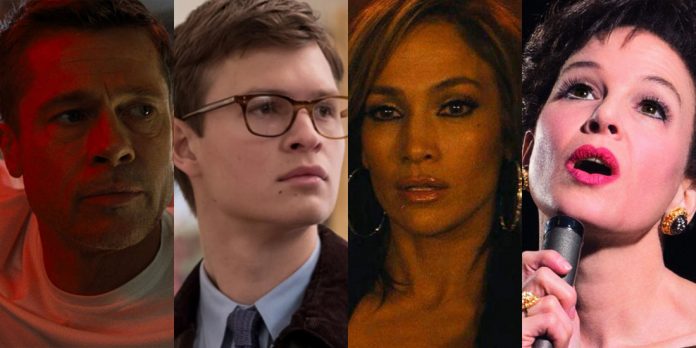 The schedule outlined in a typical awards season has produced a contradictory pattern: if you want to win, especially Best Picture, your film must be widely seen, yet it can’t be released too early as to be fresh in voters minds or become subject to controversies or a “frontrunner” status. In my mind, October would be the ideal time to fit this characterization. Think about “The Departed.” But even prime October releases from last year, “A Star is Born” and “First Man,” despite the unique qualities and success and failures of each film, were stilted by the time the Academy Awards came around. There is an incentive for the Oscar-contending films to grow a profile with moderate buzz at film festivals in September and October and then hit theaters in November and December. It seems to what worked for the success stories. Some recent examples are “The Shape of Water,” “Roma,” “The Favourite,” and “Green Book.”

​The effect of the emphasis on Telluride, TIFF, and NYFF is the film’s beginning their theatrical run becomes muted. September, in a lot of ways, is where movies go to die. There is no better example of this fact than “Battle Of The Sexes,” a project that should’ve been an easy follow-up nomination for Emma Stone after winning Best Actress the year prior. Well-reviewed films that would otherwise have awards prospects rarely come out of the month of September, especially in the above-the-line categories. Because most credible, adult-centered movies are strongly correlated with Oscar pushes, the attempt to successfully land the release date in key awards season timeframe, this produces an overall lack of interesting and worthwhile films released in September. That’s how it usually goes. I’d argue this year is different.

The most exciting and striking detail about the imminent award season is the fertile ground for theatrical releases in September. There are so many movies being released this month, that, regardless of how they shake out with award shows in a few months, they will only make adults get out to the theaters for original, non-franchise films. And even better yet — I’m nervous for suggesting this — but this may be the year where we get multiple eventual nominations (acting nominations, no less!) that make their theatrical debut this month.

This is one of those predictions and commentary narratives I feel like I should know better for suggesting in the moment, but the Oscars are in a moment of change right now. Box office, popularity, and critical reception are just as important as ever. But the actual ceremony for the Academy Awards has been moved up in date by two to three weeks than its usual date. This will affect Oscar voting and other ceremonies, like BAFTA and the guilds, which we know impact/forecast the Oscar race. Therefore, everything we know about timing is up for debate this year. Though it’s most probable lately released films are more likely to suffer the consequence of this change, this could put earlier released films back in play. One non-festival film I fear could suffer from a late release like “The Post” did two years ago is Greta Gerwig’s “Little Women,” with its Christmas release, but that’s a blog piece for another day.

“Hustlers” is a film that is the pitch-perfect example of what I described above on both counts. It’s an invigorating, fresh, non-franchise adult film that, yes, has some Oscar potential. It has the most to gain of any film released this month. I saw “Hustlers” this weekend, and I absolutely loved it.  The film marvels in its post-modern take on the crime/hustle genre. Lorene Scafaria’s directing and the editing techniques, in particular, have a vitality that’s unmistakable. And obviously, the film has made waves with audiences, raking in $33 million opening weekend, which is a huge achievement for a female-led, R-rated film about strippers.

It’s not typically a film the Academy usually goes for, but the one category where “Hustlers” could go all the way is Best Supporting Actress for Jennifer Lopez. It’s the best performance of her career, and she legitimately deserves to go all the way. Besides Octavia Spencer’s work in “Luce,” there hasn’t been a better supporting actress performance this year. Getting beyond the Oscar finish line will be a tough sell to the Academy. But so far, the reviews and money are making a strong case for her. With help from inevitable SAG and Golden Globe nominations, and possibly a few critics groups wins (watch out for a potential win from NYFCC, the vein of Tiffany Haddish), Lopez could push through the Academy’s biases if she’s committed to campaigning. At worst, she’ll go the way of Nicole Kidman’s ballsy, creative turn in “The Paperboy:” great work and factors into the conversation in some way, but not the Academy’s cup of tea in the end. But “Hustlers” has thematically culturally relevant and is making a boatload of cash. It could happen.

​Another, more secure September Oscar prospect is Renee Zellweger in “Judy.” It will hit limited screens in New York and Los Angeles in the final weekend of September after running the circuit at festivals. The idea of Renee Zellweger, who had one of those history-making, blazing runs from 2000-2003, making a comeback in what most pundits and critics, who have seen the film, say better than any performance she’s ever given, that is exciting for Oscar-watchers like me nostalgic for the early 2000s.

Some are skeptical of Zellweger’s prospects to hit the grand slam and actually win Best Actress, citing evidence of how Glenn Close suffered from an early release date and headlining a film that received no other nominations (as “Judy” probably replicate) last year in “The Wife.” I dissent. Zellweger and Close are a false equivalency; Close is much older, gave a much more passive performance, and in fact, had a film released significantly earlier in the middle of August, before the film festivals even began last year. Zellweger has been missing in action for over a decade and she’s coming back as one of the most iconic Hollywood actresses of all-time in showstopping performance. This will be a comeback narrative for and the level of praise she’s received for playing Judy Garland is reminiscent of the reviews Cate Blanchett received for “Blue Jasmine,” which I feel is a better comparison. A well-liked, middle-aged Best Supporting Actress winner in a heavy, overt, baity role. Her main competitor could end up being Scarlett Johansson for “Marriage Story,” which is destined to become an across-the-board contender and compete for Best Picture. While Zellweger may be a throwback to a nostalgic time, Johnasson’s massive star power through two decades of solid work and her mark as Black Widow to mass audiences be to make her an undeniable choice of today.

On the horizon is “Downton Abbey,” though one could technically classify as a franchise film, as another example of this adult-drive cinema releasing this month. This cast and crewed ruled the school when it competed in television categories at the Emmys. It was always a favorite. The film adaption will likely rake up quite a bit of money, too, from fans of the series, older audiences, and those akin to British stories. As for Oscar prospects, it would also be a tough sell, though I guarantee there is overlap between the television and film Academy in love for the series. I’m not ready to throw it out as a frontrunner for any Oscar category, besides maybe costume or production design.

However, be aware: this is the type of mass audience-leaning, big-star, early release that will be a force at the SAG awards. I could see “Downton Abbey” scoring a Cast Ensemble nomination and even a Best Supporting Actress notice for Maggie Smith. Smith is especially a smart choice if you remember her SAG nomination for “The Best Exotic Marigold Hotel” in 2012. The series won the SAG Cast Ensemble and Drama Actress (Smith) categories during its television run, so they are already on the radar of SAG voters. It’s a weak year for Best Supporting Actress, so Smith could ride a Robert Duvall in “The Judge” type of a wave into a safe nomination at the Oscars if the cards fall in the right places for her.

​Rounding out my theory of adult movie September mania are “The Goldfinch” and “Ad Astra.” Now, I understand “The Goldfinch” disappointed just about everyone in its TIFF premiere, and its current Rotten Tomatoes score is abysmal. Oscar prospects are dead. But you can’t discount this movie as a good option for adult audiences, especially non-awards focused, well-educated adults who pay attention to things such as Pulitzer Prize-winning books. I saw it this weekend as well, and I think it offers more than the mob mentality piling on this movie describe. Fun fact: this is the first Nicole Kidman project that has been an adaptation of a Pulitzer-winning work that will not result in an Oscar nomination – “The Hours” won her Best Actress in 2003 and “Rabbit Hole” earned her in a nomination in 2010.

The last especially interesting, adult-focused theatrical release for September I want to acknowledge is “Ad Astra.” James Gray is a filmmaker I adore. He makes the types of films that are tragically magnetic, like “Two Lovers” and “The Immigrant.” His space odyssey with Brad Pitt looks visually stunning and compelling. Though its reviews have been strong, it’s unlikely this will rise to Oscar-level consideration for technical categories unless Pitt’s name recognition carries in buckets of money. It’s possible. However, look out for critics associations for recognize the film for technical aspects. And having an original film like “Ad Astra” even exist right now simply warms my soul as someone who likes original, challenging, adult movies.

Condensing the awards season timeline by two weeks has to have a consequence somewhere. Releasing films like these now has to mean something, and Zellweger and Lopez may face the positive side effects of this decision by the Academy, while something like “Little Women” may, unfortunately, face the negative ones. The Oscars aside, it’s a fun time to be at the movies with wide releases, even if Oscar potential does end up being minimal for these films.