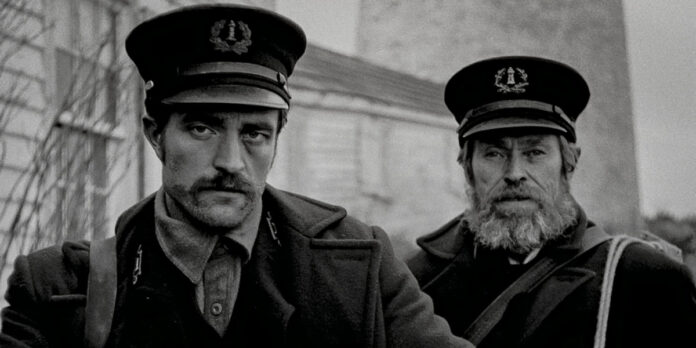 THE STORY – Two lighthouse keepers try to maintain their sanity while living on a remote and mysterious New England island in the 1890s.
​
THE CAST – Robert Pattinson & Willem Dafoe

​After his making his directorial debut with “The Witch” in 2016, Robert Eggers could’ve done almost anything. He could’ve made a larger budget film. He could’ve made a studio film. He had the world in the palm of his hands. What did he decide to do? He decided to release the most bizarre, maddening, wild and batshit insane film, quite possibly of the decade. A black and white dive into the very depths of psychological terror, “The Lighthouse” examines two men’s worst fears as they manifest with nightmarish imagery and the kind of cinematic experience that is unlikely to leave your mind any time soon. Eggers’ second feature film is perfectly assembled in every conceivable manner to astound, disturb and mentally confound you in the best ways. Hark!

Ephraim Winslow (Robert Pattinson) is the second lighthouse keeper, serving under Captain Thomas Wake (Willem Dafoe) at an unknown New England rock in the 1890s. What happened to the first keeper remains a mystery. However, Winslow wants to earn enough wages to start fresh and have a peaceful, quiet life. But for the next four-plus weeks on a secluded rock in the middle of the ocean, he will receive anything but that as the two men’s isolation increases congruently to their strengthening bond with one another. Their growing trust in one another is put up against their growing distrust. Their sanity is pitted against their madness. And as the days go by, no one comes to relieve them and the drinks start flowing, events on the rock get more excessive, as the line between what is real and what is fiction blurs.

Robert Eggers wastes very little time plunging audiences into the bonkers elements of his story. The first moment we see Dafoe and Pattinson’s faces on the screen staring directly into the camera at the ship that dropped them off as it sails away, we get the sense that it is a warning shot to the audience, to strap ourselves in for the crazy ride that is to come. Typically, most movies will take their time, pushing its sane main characters towards the brink of insanity by the film’s third act, culminating in a profound and disturbing climax. “The Lighthouse” does no such thing as you get the impression from the very first frame that these two troubled characters are already hiding secrets, are already dealing with some heavy stuff, and putting them alone together for a prolonged period of time under such harsh conditions is a bad idea.

The performances from Pattinson and Dafoe are both two of the very best that either of them has ever graced the screen with. Pattinson is brooding and desperate as he does most of the manual labor around the island with little to no support or words of gratitude from his commanding officer. Dafoe has the more unhinged role from the very beginning but Pattinson slowly rises to Dafoe’s level by the end, delivering a manic performance that further cements him as one of our most underrated and best actors working today. Dafoe’s vocal delivery is almost caricatured at first, as he attempts to spew Eggers’ carefully constructed language (which like “The Witch” is fitting in with the period in which the story is set) as the drunken, mad sailor. However, as the story progresses and his character receives more depth, Dafoe’s talents as an actor shine through, leading to some spine-tingling moments including one monologue of condemnation towards Winslow, all done in a single close up, where I felt Dafoe’s eyes might very well pop from his skull.

The two of them carry this theatrical-like story with determination and bravery (the shooting conditions look bleakly unpleasant and physically demanding on a level that has not been seen since 2015’s “The Revenant“). There’s even a homoerotic undercurrent to their relationship that starts to form, the longer they spend time together. Though many will likely be off-put by the film’s hard to discern dialect (a second viewing with subtitles is a must if you’re so inclined to dip your feet back in) and bizarre story developments, which I will not dare spoil here, many will likely want to come back to study the masterful performances by Pattinson and Dafoe along with Eggers’ unbelievable eye for detail in the craftsmanship of this film.

The stunning black and white photography from DP Jarin Blaschke that borrows heavily from German expressionism is a treasure chest of gorgeous shots and frames (with one final grotesque shot that will haunt you long after the film is over). The ominous and unsettling music from Mark Korven (also the composer for “The Witch“), along with the deeply uncomfortable but expressive sound work that includes the continuous sound of a blaring horn in the background, squawking seagulls, storm effects and more, all come together to create a mood that is unique and richly cinematic. The editing is crisp, fluid and wastes no time getting the story moving (this is no slow-burn). However, with this film operating on maximum overdrive in terms of shock value at almost two hours long, there is a bit of fatigue that starts to creep in towards the end. One wonders how “The Lighthouse” would play if it were to lose 20 minutes and become a 90-minute film instead. It’s a small quibble when all is said and done, and one being made mostly because I worry for anyone who watches this, not knowing beforehand what it is they’re in for. It’s that psychotic.

Robert Eggers’ pulls no punches in his second darkly disturbing film. Make no mistake though, the performances by Dafoe and Pattinson are so utterly terrific and the self-awareness by Eggers is so astute, that there are surprising moments of levity in “The Lighthouse.” Whether it’s an intoxicated sailor song and dance, or the reoccurring bits of flatulence from Dafoe, or just the overall wackiness of Pattinson and Dafoe’s off the wall chemistry, “The Lighthouse” is not all gloom. It’s uncanny, surprising and further proof that Robert Eggers is an exciting filmmaking force operating in the darkest corners of our mind today.