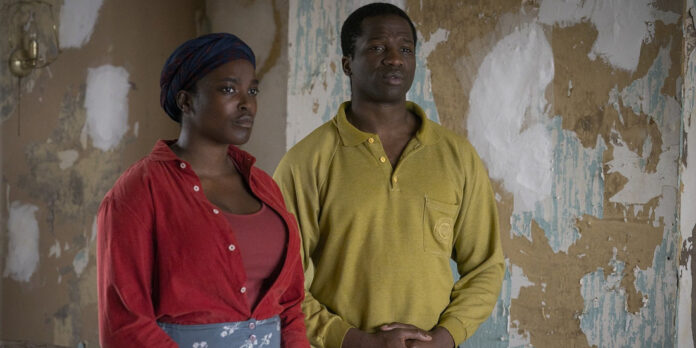 THE STORY – A refugee couple makes a harrowing escape from war-torn South Sudan, but then they struggle to adjust to their new life in an English town that has an evil lurking beneath the surface.

​It’s such a fortunate time right now that the landscape of horror is so diverse. The stories that exist within this genre no longer are bound to their roots of cheap thrills that hold little to no artistic merit. They can actually explore more subtle thematic content that indulges in bold filmmaking choices. That’s not to say that the broad spectacle of the genre can’t also be present, but the options that horror has presented lately in terms of engaging storytelling have certainly broadened. That foundation is what “His House” seeks to work with, and it manages to tell an interesting tale while indulging in an effectively eerie mood.

The film centers on a young refugee couple who have fled from South Sudan in order to make a new life for themselves in England. Both Bol (Sope Dirisu) and Rial (Wunmi Mosaku) find difficulty in adjusting to their new lives, trying as best they can to assimilate in a new culture while also appeasing the government-appointed social worker Mark (Matt Smith). It is clear that the couple is haunted by their traumatic past in the war-torn region, least of all stemming from the loss of their daughter during their escape. However, in their dilapidated home on the rundown estate, ghostly apparitions start to appear, and the haunting no longer becomes a metaphorical emotional state. It all leads to a cathartic revelation that will test both of their capabilities.

There are two parts that can be viewed here in terms of the film’s construction, and admittedly the first section is a bit of a frustrating watch. There’s no doubt that director Remi Weekes has a talent for effectively building unnerving tension, and the suspense is naturally crafted through the general atmosphere and tone. It’s quite appreciated how he manages to create a sense of horror not only through the creepy imagery but also by way of underscoring the human conflicts of xenophobia that crosses all lines of race and class. At the same time, there is also a feeling that his script lacks complexity within the characters to make them compelling. While they participate in highly effective sequences, one feels at arm’s length in becoming invested in their story.

That is until a moment comes when more information is revealed to give a greater context of what exactly concerns their plight. It would be a shame to reveal that here, but suffice it to say that once this important development becomes known, it gives a fresh wind in the sails and suddenly makes the characters more dynamic and the scenes to feel much more layered and nuanced. The commentary of the struggle that people face between their determination to make a new life while also battling the traumatic actions that forced them from their homes is given a much sharper focus. Not all of the pacing problems are completely eliminated, but there is a great relief once one understands what has really been at stake.

Dirisu and Mosaku both deliver rather strong performances, with each being able to capture the absolute dread that stalks the lives of these characters. There’s a subtle strength that Dirisu projects that is the obvious façade of crumbling insecurities, and the ways in which that is manifested within his performance is impressive. Likewise, Mosaku always presents an effective combination of sympathy, strength and anxiety that makes her portrayal feel that much more interesting. Her turn is the stronger of the two, but both are quite good here and are especially appreciated during the tedious first act. Smith is the only headliner of the supporting cast, but his presence is wholly unremarkable. However, it suits the story best that his screen time is limited so his efforts are not completely missed.

Even though some story elements in “His House” that feel underwhelming manage to find themselves resolved in the second half, it doesn’t totally erase all of the issues that came before. The film does still suffer from a lack of momentum to really get invested in these characters, and even the filmmaking itself feels slight, if still impressive. It’s only when the scope widens that the storytelling becomes more fascinating, the character work more impressive and the themes more resonant. Overall, it’s an alluring piece that once again gives a reminder of how impactful horror can be at revealing the deeper terrors that exist within ourselves.