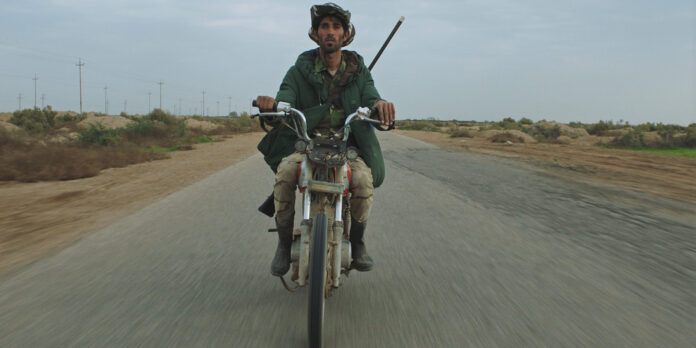 THE STORY – Gianfranco Rosi’s new documentary is an immersive portrait of those trying to survive in the war-torn Middle East.

​​With wars in the Middle East going on for what seems like forever, acclaimed documentary filmmaker Gianfranco Rosi, whose “Fire at Sea” was nominated for an Academy Award in 2016, now turns his camera toward residents of the Middle East who, while not living on the front lines, nonetheless have had their lives forever altered by the gunfire going on within earshot of their homes.

“Notturno” (“night” in Italian), doesn’t always take place at night – in fact, several of the film’s most memorable shots come as the sun is either rising up or coming down – but it’s arresting images that are Rosi’s stock-in-trade. There’s relatively little dialogue in “Notturno,” and no storyline per se. It’s a collection of brief glimpses into these people’s lives without narration, and it’s up to the audience to piece these pieces together to form a quilt of a storyline.

But what images! There’s a beautiful one with a fisherman paddling through the glimmering water, which one would assume would be coming from the sun, but is instead coming from the gunfire from a firefight farther away; a couple becomes romantic on a rooftop only to be interrupted by the sound of distant gunfire; and refugee kids trying to deal with the war via art therapy. Individually, these scenes are arresting, but taken together, they add up with unexpected power.

However, many of the vignettes don’t have the same punch, and, without a linear narrative to hold them together, much of “Notturno” feels scattered, even random. Worse, there are several even more troublesome segments that feel almost exploitative in nature – one mother weeping in the jail cell where her son died, another repeatedly listening to the terrified cell-phone messages left by her kidnapped daughter who, judging by the woman’s tears, is now dead. Yes, the grief expressed in these scenes are illustrative of the experiences of countless other families during the Middle East wars, but the grief shown here is so devastating and so personal that it’s almost prurient to include it in a movie.

Rosi has demonstrated once again that he has one of the best eyes among documentarians for capturing indelible and expressive imagery, many of which in “Notturno,” despite its flaws, you will likely remember long after you see it.