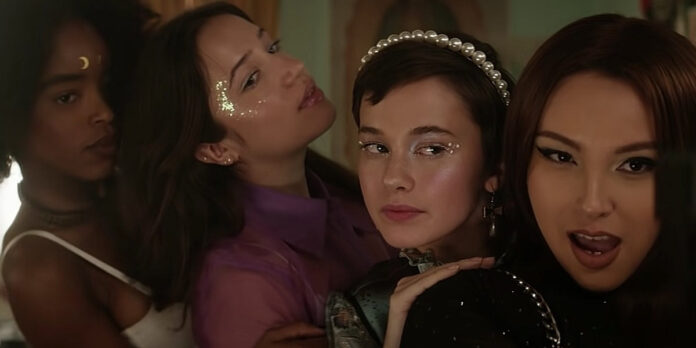 THE STORY – An eclectic foursome of aspiring teenage witches get more than they bargained for as they lean into their newfound powers.

​When news of “The Craft: Legacy” hit the internet, you can only imagine the dismay grown horror fans felt. The internet swirled with nostalgia as loving 30-year-olds claimed the new film would ruin all the original did for the horror genre, or their childhoods. The film is far from a reboot, and director/screenwriter Zoe Lister-Jones has built a story of her own, utilizing aspects from the cult classic, but never straying away from displaying her own vision. While it doesn’t necessarily have the edge the original did, “The Craft: Legacy” is a fresh take on the young witch trope.

The film’s beginning is familiar: Three young witches perform a ritual in which they wish for a fourth member of their group, who soon arrives at their school. Lily (Cailee Spaeny) has traveled across the country with her mother (Michelle Monaghan) to move in with her new stepfather (David Duchovny) and his three sons. On her first day of school she’s humiliated by sexists bully Timmy (a fantastic Nicholas Galitzine) and is consoled by Tabby (Lovie Simone), Lourdes (Zoey Luna), and Frankie (Gideon Adlon) – the three witches who wished for her arrival earlier in the film. They quickly adopt her into the group and soon enough, introduce her to a world of magic.

Later on, the girls cast a spell on Timmy to get back at his sexist ways, ultimately leading him to join their misfit group, tagging along like a spell-sick puppy. Instead of making him fall in love with Lily, the witches just want him to be nice. He plays Princess Nokia at parties, talks about toxic masculinity and reads articles by Janet Mock: He’s the perfect Gen Z boy, wokeness wrapped up into a 6’ foot package. But, everything comes with a price, and as Timmy reveals a truth nobody was expecting, the girls lose sense of their powers and what their magic is truly capable of. Timmy’s secret is also connected to Lily’s new family, all of whom have been acting stranger by the day.

While some critics may call this film “too woke,” as they did with Blumhouse’s “Black Christmas” reboot from last year, that’s not true at all. This film relishes in giving a voice to those that didn’t have it in the ’90s, but while Tabby’s storyline doesn’t focus on the fact that she’s Black, and Lourdes’ storyline doesn’t focus on the fact that she’s transgender, these characters ultimately get left behind. Unlike the original film, this story doesn’t involve the audience getting to know the witches individually. They exist as a group, other than Lily, whose protagonism gets in the way of this film feeling like an ensemble movie. Ultimately, Lister-Jones does allow these girls to be authentic and the characters she crafts perfectly show who the kids of Gen Z are. The dialogue also helps with this, as the script sounds exactly like teenagers of today helped to write it.

Although the film strays away from the darkness the original embraced, this rendition of the story suits the time it’s being released in. Wicca isn’t something people fear anymore: it’s embraced and has been showcased on television and film thoroughly since 1996. Magic isn’t feared and Lister-Jones taps into that, making the evil forces come from outside of the group, rather than within it. It’s unflinching in its sisterhood and love for girl power, which makes it a fun and light watch. “The Craft: Legacy” may not be for people who loved the cult classic, but it will surely be a hit with a younger generation seeking out a new horror film representing Gen Z.