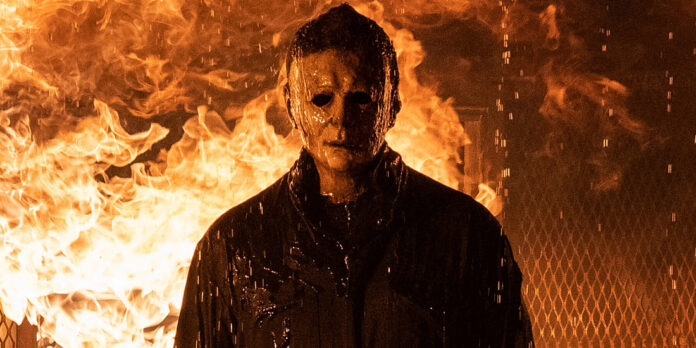 THE STORY – The nightmare isn’t over as unstoppable killer Michael Myers escapes from Laurie Strode’s trap to continue his ritual bloodbath. Injured and taken to the hospital, Laurie fights through the pain as she inspires residents of Haddonfield, Ill., to rise up against Myers. Taking matters into their own hands, the Strode women and other survivors form a vigilante mob to hunt down Michael and end his reign of terror once and for all.

David Gordon Green’s 2018 “Halloween” was an interesting experiment: A brutal exploration of trauma wrapped up inside an artfully made slasher flick. Stylistically, it harkened back to John Carpenter’s 1978 “Halloween” and the early ’80s slashers it helped spawn, but added thematic weight in the person of Jamie Lee Curtis, reprising the role of iconic Final Girl Laurie Strode as a woman who finally overcomes the paranoia caused by her long-ago trauma in order to stop it from infecting her daughter (Judy Greer) and granddaughter (Andi Matichak), just as the cause of that trauma, boogeyman Michael Myers, returns to start killing again. It’s visceral while still managing to retain the original’s sense of fun. “Halloween Kills,” the middle section of Gordon Green’s proposed trilogy, maintains that visceral quality but makes several decisions that sap all the fun right out of it. While the film does a good job of setting up the sure-to-be epic showdown between Laurie and Michael in the trilogy’s conclusion, it doesn’t do as well of a job of balancing the story’s grander ambitions with the fun of the slasher subgenre of horror.

Part of the fun of slasher flicks is watching a bunch of annoying teens/twenty-somethings get butchered in inventive ways by a near-superhuman killer. The kills can be shocking in their brutality – who can ever forget Kevin Bacon getting a twisting spear through the throat in “Friday the 13th”? – but they’re still fun to watch in a way because we have little to no emotional attachment to the characters, in part because we go in knowing that they’re going to be killed off. In “Halloween Kills,” though, most of the people on the receiving end of Michael’s bloody rampage through his childhood hometown of Haddonfield are adults. Adults who have spent their lives in the shadow of Michael’s legacy. Adults who really should know better. Adults who, in the face of danger, lose all sense of reason and make increasingly dumb decisions that result in their needless death. This could, of course, be the point, and it seems likely that this was indeed Gordon Green’s (and co-screenwriters Danny McBride and Scott Teems’s) intention. But these people are stupid in ways that are actively frustrating to watch, robbing the film of both the thrilling fun of good horror and the emotional intensity of decent drama.

After a prologue set in 1978 during the events of Carpenter’s original “Halloween,” the film picks up right where 2018’s “Halloween” left off, with the three generations of Strode women riding away from Laurie’s compound, where they trapped Michael to die in a fire. It’s not long before they hear fire trucks rushing towards the fire, and sure enough, no sooner do the firefighters arrive does Michael reveal himself and mercilessly hack his way through them. Laurie’s injuries land her in the hospital while the rest of the town goes about the business of doing Halloween things, not yet having heard the news of Michael’s killing spree from the previous film. One bit of Halloween business is a toast between four adults who were childhood survivors of Michael’s original killing spree – Marion (Nancy Stephens), Lindsey (Kyle Richards), Lonnie (Robert Longstreet), and Tommy (Anthony Michael Hall), who vows never to forget what happened. When they see on the news that another killing spree is happening, and a husband and wife couple swear they saw Michael in their car in the bar’s parking lot, Tommy whips up the bar patrons, and soon enough, the whole town, into a frenzy, arming himself with a baseball bat named “Old Huckleberry” and leading everyone in a chant of “evil dies tonight!”

This could be a rousing story, one of a whole town putting differences aside and coming together to save its own and purge its collective trauma. Instead, it becomes as basic and insipid an exploration of mob mentality as you could possibly imagine, one that in its naked desire to speak to the current cultural moment awkwardly attempts to dovetail with a story about police accountability in a way that makes both of these thematic threads look worse by comparison. This all looks even more asinine when placed next to Laurie’s story, which in this film becomes one of survivor’s guilt, shared between her and one of the police officers present on that day in 1978, who blames himself for all that’s happened since. Maybe it’s just Curtis’s conviction that sells it. Still, everything involving Laurie and Officer Hawkins (Will Patton) is so effectively nuanced and beautifully underplayed that it exposes the rest of the film for the graceless mess that it is.

Ironically enough, one of the film’s most significant liabilities also becomes one of its biggest assets. This is one of the most brutal slashers in recent memory, and the kills are gory, well-staged, and effective. The no-frills blunt force of the kills mirrors Michael’s own demeanor in a way that feels just right for Gordon Green’s vision for this series reboot/sequel, and some are effectively squirm-inducing. But while they’re effective in the moment, the film later undercuts itself in its insistence on psychoanalyzing Michael and explaining what makes him such an unstoppable force of evil. It’s the Achilles’ heel of horror films – the more you explain the monster, the less frightening it becomes. The explanation offered here, though, states outright that Michael will be even stronger and more deadly when he and Laurie get to their final showdown in this trilogy’s concluding chapter, an attempt to make him scarier that simply doesn’t work. You can’t have it both ways, and that’s precisely what it feels like Gordon Green is trying to do throughout “Halloween Kills.” The film wants to be an effective slasher, an effective drama, and an effective piece of social commentary all in one, but all of these things are fundamentally at odds with each other, and the film doesn’t find an effective way to make these disparate pieces come together into a coherent, satisfying whole. Instead, it just bludgeons you over the head with the bluntest part of each in an attempt to pummel you into submission. As any survivor of a slasher flick will tell you, that’s not a worthwhile experience.