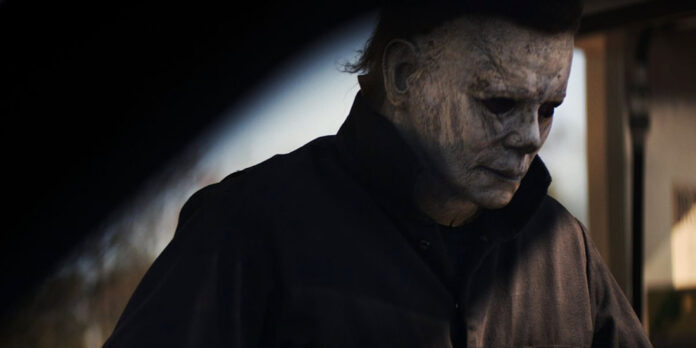 THE STORY – It’s been 40 years since Laurie Strode survived a vicious attack from crazed killer Michael Myers on Halloween night. Locked up in an institution, Myers manages to escape when his bus transfer goes horribly wrong. Laurie now faces a terrifying showdown when the masked madman returns to Haddonfield, Ill. — but this time, she’s ready for him.
​
THE CAST – Jamie Lee Curtis, Judy Greer, Andi Matichak, Will Patton, Virginia Gardner & Nick Castle

​​​​With this most recent release being the tenth in a long line of sequels and reboots, “Halloween” is one of film’s most enduring slasher series. The original, which most people agree is the best of the bunch starred Nick Castle as Michael and Jamie Lee Curtis in her breakout film role and both have returned for this latest go around. Discarding everything that came before, except the first two films, director David Gordon Green (“Stronger”) does his best to explore something new with this story. 40 years after the initial release and with the guidance of John Carpenter–director and composer of the original, Blumhouse has brought something interesting to the screen that may not please everyone but is still pretty enjoyable and will especially please longtime fans of the franchise.

In an effort to get a good story on notorious killer Michael Myers, two journalists interview his doctor and are granted permission to try to speak with the man himself before he is moved to a new, more secure facility. When their attempts to provoke a response from him fail, they move on to seek out the only survivor of his terrible massacre, his sister Laurie Stroud (Jamie Lee Curtis). They attempt to manipulate her into speaking with Myers by taunting her with stories of her past failings as a parent, but she refuses to rise to the bait. Laurie has spent her life since that terrible night preparing herself, her house, and her family for the return of Michael, no matter the damage it may do to herself and those around her. Consequently, her relationship with her daughter Karen (Judy Greer) and granddaughter Allyson (Andi Matichak) is fraught with complications and emotional upheaval.

On Halloween night, the hospital is set to bring Michael via bus to the new facility and his sympathetic doctor insists on attending to him until the final moments of the process. Unfortunately (and predictably) the bus crashes and Michael flees the wreckage to continue his rampage as though it had never stopped. When Laurie first discovers his escape, she attempts to find him, combing the streets as she hunts the elusive Michael on his murder spree. When it becomes clear that he is coming for her personally, Laurie gathers her family together and retreats to her fortress to await his arrival and the final confrontation.

With the original hero and villain returning, as well as John Carpenter involved to assist with the production and most importantly the musical score, “Halloween” started off with the best possible chance of being a good movie. Jamie Lee Curtis gives a great performance as the much older and hardened Laurie, despite the role’s narrow focus that doesn’t allow us more than a glimpse of her as more than a tough badass. Called back to portray Michael sans his mask, although we still never see his face, Nick Castle plays the wordless giant killer with the same slow, menacing style that he initially brought to the role. The new additions to the cast of Judi Greer and Andi Matichack suffer from the same flat character development as Curtis, but they do a decent job with what they are given. The side cast who mostly end up dead, provide entertaining fodder for the impressive array of scavenged weapons that Michael makes use of, but none of them add anything interesting to the story.

“Halloween” tries very hard to evoke the same tone of suspense and anxiety that was so impressive in the first film with pulsating music, and dark surroundings that mesh well with the long shots and careful cinematography. It often teeters wildly in between feeling like a fitting sequel and a little too on the nose (so many callbacks), but when it is able to find the balance between the two, it is at its best. With its portrayal of Laurie as an adult, as well as that of her daughter and granddaughter, the film attempts to draw attention to the effect that severe trauma has not only on the original victim but on their families as well. Too often, however, it feels ham-fisted and obvious as it makes those parallels and by the end of the second act it mostly abandons them in favor of the more traditional horror-slasher tropes.

Despite its flaws, “Halloween” is still one of the better sequels to the original timeline. It clips along at a good pace as it hurtles toward the inevitable conflict with an increasing intensity. It deftly weaves together its spooky lighting, subtle camerawork and gorgeous score to successfully create a tense atmosphere that rarely lets up the pressure. For better or worse “Halloween” embraces the simplicity of its franchise while also trying to push the boundaries of the dialogue that is typically bad in slasher films but here it ends up feeling muddled by the time it’s all over either way.