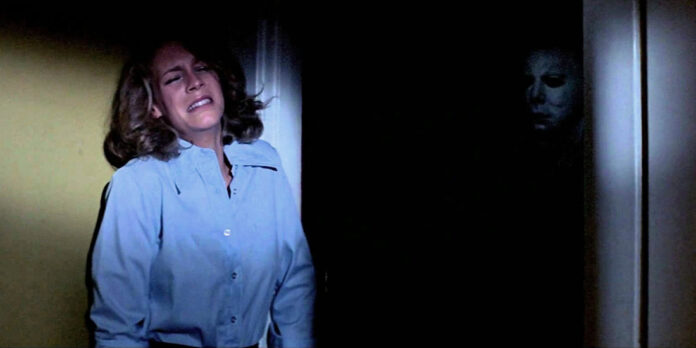 ​THE STORY – On a cold Halloween night in 1963, six year old Michael Myers brutally murdered his 17-year-old sister, Judith. He was sentenced and locked away for 15 years. But on October 30, 1978, while being transferred for a court date, a 21-year-old Michael Myers steals a car and escapes Smith’s Grove. He returns to his quiet hometown of Haddonfield, Illinois, where he looks for his next victims.
​
THE CAST – Donald Pleasence, Jamie Lee Curtis, P. J. Soles & Nancy Loomis

​​​​I think when people discount something, especially in cinema, due to its age, that can be a bit of an unfair criticism. Everything is going to age and everything is going to eventually become a product of the time it was made in. Now, while there are films that certainly cannot escape this inevitable trait, it is truly special when something in cinema has the ability to transcend this. Horror is a genre that especially feels like it gets the short end of the stick when it comes to this. However, there are plenty of classic horror films that simply get better with age and one that will forever be remembered, celebrated, and studied is John Carpenter’s 1978 film “Halloween.”

Fifteen years after murdering his sister on Halloween night, Michael Myers escapes from a mental hospital and returns to his hometown of Haddonfield, Indiana in order to kill again. Laurie Strode (Jamie Lee Curtis) and her fellow high school classmates fall prey to the malicious and violent intentions of Myers and must do their best to survive the scariest night of the year.

That’s it. That is the plot of “Halloween” and to be honest, that is one of the things that makes the film so great and scary. The simplicity of the entire film gives it a certain level of realism that we don’t see too often in horror films, especially modern ones. Whenever there is a long, convoluted explanation of what makes the presence of the film evil, the terror becomes a little less real and scary. Now, some films handle their explanation with grace and dedication and these moments work incredibly well, but whenever a horror filmmaker sticks to “this person or thing is evil simply just because its evil” that adds an entirely new dynamic.

“Halloween” stands the test of time for many reasons but one of its greatest achievements is its cinematography. Not only are the camera moves motivated and precise but the composition is striking and bold. The way Carpenter and cinematographer Dean Cundey put a heavy emphasis on how the background and the foreground play off of one another is simply brilliant. Forcing the audience to search through every inch of every frame, constantly on the lookout for if Michael Myers is lurking somewhere in the image is a feeling you will never forget. The haunting stare of the Captain Kirk mask that Myers wears is soul piercing and whenever there is a shot of him staring at a character or into the lens, it turns your blood ice cold. From the masterful opening POV one take, to the use and placement of shadows, to the exact static and stoic shots of Michael stalking his victims in the shadows, the cinematography is what truly sells the terror of “Halloween.”

The score for “Halloween” is revered as one of the greatest of all time and it certainly adds a new level of freight to the movie. But one thing I’d like to point out that I don’t believe gets mentioned enough when discussing this project is Carpenter’s deliberate use of silence. While the music and score are used to heighten the murders and suspenseful moments of the film, he will also utilize silence as a form of suspense as well. I think one word can be used to sum up Carpenter’s mixture of silence and static shots in the film and that is patience. Carpenter’s patience to hold onto a shot just a little bit longer or let us linger in silence just a small moment longer is not only brilliant but immensely effective. The juxtaposition of Michael’s blank and haunting stare with a physically heavy silence will force you to sleep with a light on.

Something that is worth mentioning with this film is John Carpenter’s legacy. The maestro has directed horror classic after classic after classic. He found his sweet spot within the horror genre and could truly thrive there but one thing that I think sets Halloween apart from his other work is the psychological aspect. While films like “The Thing” or “In The Mouth Of Madness” are disturbing and scary, “Halloween” traumatizes you. Carpenter’s ability to not only thrive within the physical realm but the mental realm of the horror genre is what separates him from the competition. His dedication to ensuring that the audience is not only closing their eyes because they are afraid of what might appear on screen, but also putting his audience in a position that makes them uncomfortable to sit with their own thoughts for an extended period of time. His ability to transcend time with horror films that are still effective to this very day is outstanding. “Halloween” is a visceral film, an emotionally taxing film, a film that will make you scream for help while also bringing a tear to your eye because you not only feel for Laurie Strode but because you know deep down you do not know how you would react in the same situation that she has found herself in. It is Carpenter’s magnum opus, a culmination of everything that he has accomplished throughout his career.

“Halloween” is a nail-biting, spine-tingling slasher film that will forever stand the test of time. With amazing performances from Jamie Lee Curtis and Donald Pleasance, each and every aspect of the film is in tip-top form. Solidifying Carpenter’s legacy as the master of horror, “Halloween” capitalizes on striking fear into its audience in two completely separate forms. With a striking score and an even more striking deliberate use of silence, Carpenter really digs deep to truly petrify you as a viewer. Making for possibly the best slasher film of the genre, “Halloween” will forever be looked at and discussed and should always be on everyone’s October horror movie watch list if it’s not already.