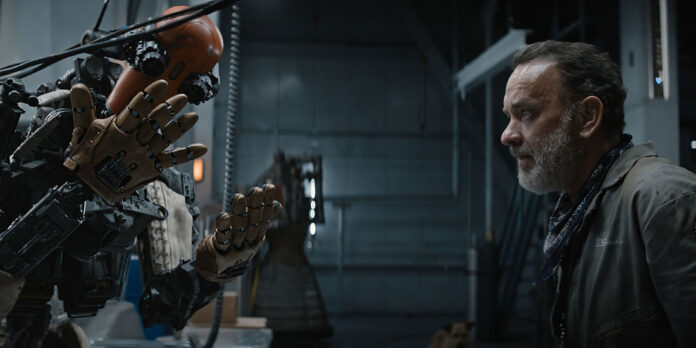 THE STORY – A robot that lives on a post-apocalyptic earth which was built to protect the life of his dying creator’s beloved dog, it learns about love, friendship, and the meaning of human life.
​
THE CAST – Tom Hanks, Caleb Landry Jones, Samira Wiley, Laura Harrier & Skeet Ulrich

Director Miguel Sapochnik helmed some of the most robust “Game of Thrones” episodes, including “The Winds Of Winter,” “The Battle of the Bastards, “Hardhome” and “The Long Night.” His work in the show was defined by sleek cinematography, impeccably staged action, and brisk pacing. He previously had directed a feature, the bleak and brutal “Repo Men” starring Jude Law, but that did not compare to what he would deliver later with HBO’s mega-hit series. Thus, it would not have been unreasonable to expect “Finch,” his dystopian sci-fi with Tom Hanks, to be both action-packed, brutal, and dark. It turns out it is none of those things and serves as a surprise in Sapochnik’s evolving filmography.

“Finch” follows a robotics engineer named Finch (Tom Hanks) and his dog, Goodyear. They live a lonely, secluded life on a post-apocalyptic Earth after a solar event wiped out most of the world’s population and left it a dusty wasteland. Suffering from illness and close to death, Finch builds a robot named Jeff (Caleb Landry Jones), who he hopes will take care of his dog after he passes away. After living for years in an underground bunker with no human contact, the three of them take a journey out West so that Finch can teach Jeff what it means to be alive, as he teaches him valuable human lessons along the way.

Far from the cynicism on display in “Game of Thrones” and “Repo Men,” “Finch” is about the most optimistic and warm-hearted dystopian drama you’re going to find maybe since Disney Pixar’s “Wall-E.” There is no antagonist. There are no fight scenes. There are allusions to humans who have descended to savagery, but we never see them. Instead, like last year’s “The Midnight Sky,” this is a leisurely-paced road trip movie set in a desolate wasteland.

In any good road trip movie, you, of course, need a compelling leading performer. We tend to take Tom Hanks for granted, but it is really striking just how much he gives this performance his all as a sick and weary older man who has been beaten down by life in the post-apocalypse. Once eternally youthful-looking, Hanks doesn’t shy from showing his age. He sells his emotional monologues, his fear, his loneliness. A serviceable if a bit unexceptional movie surrounds him, but he’s giving an exceptional performance, arguably his best since “Captain Phillips.”

Caleb Landry Jones provides effective voice work as Hanks’ robot companion Jeff, while the dog actor accompanying them both is charismatic and endearing. The visual effects work on Jones’ robot character is nearly seamless. He feels genuine and grounded, never distracting from Hanks’ work or breaking the audience’s immersion into the emotional story. Such work could land the film a surprise Visual Effects Oscar nomination.

However, besides Hanks’ solid performance and the visual effects work, little else stands out in the movie. The sincere screenplay by Craig Luck and Ivor Powell certainly feels familiar, evoking shades of “The Midnight Sky” and “Love and Monsters” from the past year alone. More is desired from the thin and overly stretched plot, whether that be more conflict or something more exciting overall –anything to make the film feel less slight. But it’s hard to begrudge the film’s commitment to good-natured optimism given the past two years. Like another Apple TV+ property, “Ted Lasso,” sometimes it is refreshing to see something dedicated entirely to goodness. Sapochnik’s ability to balance tone ensures that the film feels less saccharine than other post-apocalyptic sci-fi movies we’re typically used to seeing. Sure, there are similarities and the story can certainly be anticlimactic, but it is at least engaging to watch, thanks to Sapochnik’s pacing and solid hand of direction. In fact, despite the flaws pointed out, it is immensely watchable, making it the perfect type of movie to show to family members even if it’s adequate, forgettable sci-fi.

While many of us were hoping for a sci-fi classic from Sapochnik, what we got can’t be considered a disaster either. It’s far from that. “Finch’s” only crime is that its draws comparisons to many other films which have come before it, even if it is an impressively well-told story. Sapochnik has style to spare, and we get another reminder of the invaluable talent that is Tom Hanks. If you’re fed up with darkness and cynicism, you can do far worse than “Finch.” You may not think about it in two weeks, but you won’t regret watching it either.