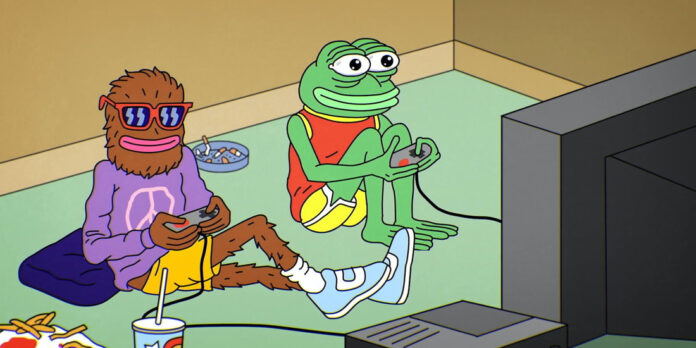 THE STORY – In November 2016, a nasty election cycle had exposed a seismic cultural rift, and the country suddenly felt like a much different place. For underground cartoonist Matt Furie, that sensation was even more surreal. Furie’s comic creation Pepe the Frog, conceived more than a decade earlier as a laid-back humanoid amphibian, had unwittingly become a grotesque political pawn.

​​​It’s always quite fascinating when one can get an insight into the hidden origins of something that feels so ubiquitous in the world. Many characters and events enter the popular discourse and become such a sensation that their reputation eclipses everything else that may have been established before. It’s a strange phenomenon that can offer interesting discoveries when one attempts to look into how these moments came into prominence and how radically circumstances changed the context of its existence. “Feels Good Man” is a documentary that aims to do just that, focusing its attention on a particular internet creation that became incredibly influential. And it does so by being enlightening and entertaining along the way.

The subject here regards the infamous cartoon character known as Pepe the Frog. Most have come to know him as a representation for far-right viewpoints; an image that circulates heavily in racist and nationalist communities and eventually became an official symbol of hate speech. However, unsurprisingly, the origins of this character have no such roots in these groups. It’s the spawn of cartoonist Matt Furie, and his initial intention was to create a goofy, slightly irreverent, but quite innocuous member of a group of anthropomorphized animal friends in an indie comic book. The path from such humble beginnings to widely recognized villainy is an intriguing odyssey that’s given the light of day.

Director Arthur Jones sets out to chronicle the complicated course that this seemingly harmless character took that led to a very insidious world, and the revelations made along the way are inherently fascinating and quite disturbing. There’s a sharp focus on the toxicity of certain online factions that relish in the resentment of others, and seeing how the flames of discord intensify as the culture polarizes is chilling to witness. The exploration into the isolated, self-loathing, and aggressive personalities of these bodies and their affinity for the vague thesis statement of Pepe is often hard to watch. However, it’s illuminating how such perniciousness quickly metastasizes into a dangerous movement.

Juxtaposed against these foreboding developments is a portrait of the artist himself. It’s a great delight that Furie presents himself with such a mellow charm that’s instantly appealing. It’s quite obvious how tortured he is regarding these events, and how nefarious clubs have twisted and polluted the image of a creation he fondly carries. His moments are not only a joy to take in because of his winning personality, but they also signify a theme of authorship that wrestles with a creation that’s no longer tethered to their original intention. Sometimes these juxtapositions with the more serious content feel trivial, but Furie’s charm always happens to win you over, particularly when his maturation as an artist is explored later in the story.

All the same, while this does contain a comprehensive report on a dangerous escalation, it doesn’t always reach those highlights elegantly. The explanations used to comment on the sudden rise of fascination with this character are rather opaque at times and quickly rushes off into another section. There are also several tangents, mostly related to Furie, that may be slightly charming but do end up distracting from the overall narrative. A certain afterlife for this character is also shown, and it represents a great transformation in its public perception. Yet this feels more like an afterthought and is underutilized. As so much of the film focuses on the cynicism that surrounded Pepe, not having a larger amount of time devoted to how his reputation was seemingly rescued for more inspiring activities felt like a missed opportunity.

“Feels Good Man” is a documentary that offers up an intriguing perspective into a treacherous and frightening world. It manages to have this insight into a noxious community while also highlighting how it took root in benign messaging and easily transformed these symbols into monuments of hate. The storytelling doesn’t always land most succinctly and it’s a detriment to the overall effectiveness of this exploration. Still, there’s plenty on display that’s inviting to uncover, and when guided by a compelling artist’s evolution at the center, there’s enough to love. As a character study of both a creator and his unwieldy creation, there’s an alluring story that’s worth the discovery.