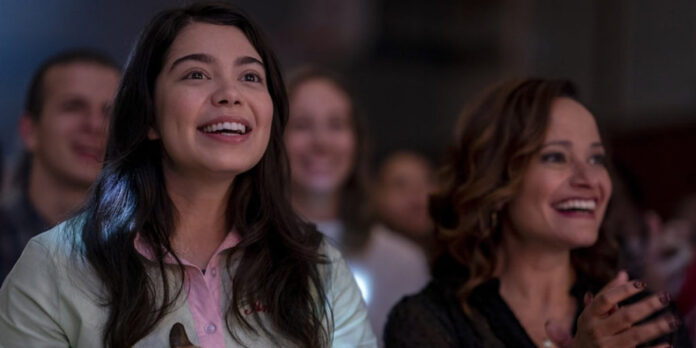 ​​​​​Amber Appleton (Auli’i Cravalho from “Moana“) is one of those high school students. The overachiever who’s somehow both talented and smart, who manages to hold down a part-time job and volunteer at a local nursing home, and somehow maintains a sunny disposition that allows her to be friends with everyone. Her joyful smile belies the fact that she and her mother (Justina Machado) are basically living on the school bus that her mother drives. Amber has been trying to save for the two of them to get an apartment, but her mother’s alcoholism and on-again, off-again relationship with an abusive boyfriend aren’t helping. When she gets an audition for the prestigious musical theater program at Carnegie Mellon University, her can-do attitude is put to the test as her life becomes more and more precarious.

Pretty much every beat of “All Together Now” happens exactly the way you think it will. There’s nothing new here at all, but it’s written and performed with great sensitivity. Matthew Quick (author of “Silver Linings Playbook”) has adapted his own novel, and it’s obvious that the film is coming from a place of deep empathy for the characters. Amber, her mother, and her closest friends are all fully-rounded, three-dimensional human beings, which makes it easier to become invested in the story. It would be so easy to cast Amber’s mother as a villain of sorts, a woman who puts her own needs before that of her child, but both the screenplay and Machado’s performance make it clear that she’s dealing with her own issues and trying to make the best of a bad situation. She may be a bit proud, but she’s also pragmatic – she knows the man she’s seeing is bad, but she can’t hear a word against him because being with him means shelter for her and her daughter. Amber is no saint, either. At times, she’s unwilling to acknowledge just how bad her situation is, preferring to lie rather than accept help from others. In Cravalho’s hands, she’s very much her mother’s daughter.

Director Brett Haley, who co-wrote the screenplay with Quick and Marc Basch, has been making quite the career for himself with modest films that are gentle on the surface but have a lot of complex emotions underneath. This is his second film in 2020 to be released on Netflix (after “All the Bright Places”) that finds him working with teenage protagonists, and he treats the characters and their circumstances with the light touch that has proven to be his defining characteristic as a filmmaker. Haley is not one for big directorial gestures – the film’s opening credits montage, set to Shirley Ellis’s “The Clapping Song,” is as energetic as it gets – but he’s able to ground even the most melodramatic twists in the rhythms of everyday life. He’s a filmmaker of extraordinary empathy, and “All Together Now” is positively full of it. The way the film looks at the cycle of poverty – how one event leads to others without time to process, and how certain structures are in place that keep us down and ensure we can’t move up – is indicative of this, and something that feels especially worthy of being looked at in the current moment. That “All Together Now” never feels heavy in any way is a testament to Haley’s deft hand.

It’s also a testament to the star power of Cravalho. The erstwhile Moana is making her live-action film debut here, and if her performance at the 89th Academy Awards weren’t proof enough, the girl is a star. She has a natural charm that makes Amber’s overachiever persona palatable, and when big news hits, she makes the choice to focus all of her emotions inward, acutely aware that Amber’s life experience has left her vulnerable but unable to share her truest self with others. Perfectly in sync with her director, Cravalho never reaches for the big emotional moments, instead underplaying them in a way that makes sense for the character. Her scenes with Machado, in particular, are a master class in creating a deeply felt, lived-in relationship between two people who only have each other.

The pleasures “All Together Now” offer may be simple, but they’re still enjoyable. The clichés of the screenplay feel less clichéd because of how committed the cast and director are to keeping every moment grounded in emotional truth. It’s short and sweet, and if you have it on in the background like so many other Netflix originals, you may just find yourself stopping whatever else you’re doing as you get caught up in the characters and their story.