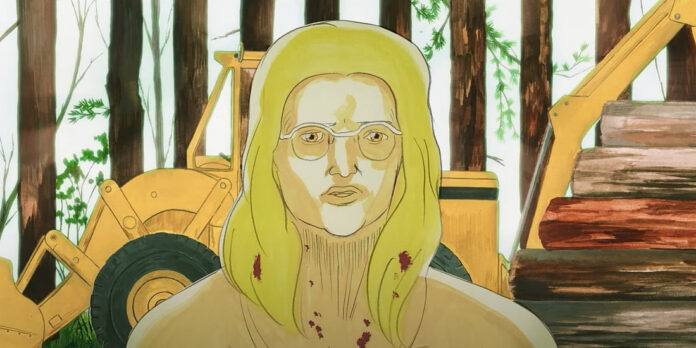 THE STORY – In this richly-animated adventure story, zookeepers tasked with safeguarding mysterious and endangered mythical creatures must protect them from enemies far and wide.​

Animation is one of those mediums that still struggles at times to break out from the family-friendly lane it has found itself in for decades. There are, of course, examples of films that do not fit into this particular mold. Still, the vast majority of audiences have become too accustomed to seeing any non-live action film as one that is intentionally targeted to much younger viewers. That is why interest is piqued when a film comes along that can utilize the boundless visual opportunities afforded in this space while mapping that style onto intriguing storytelling. “Cryptozoo” has plenty of the former, for sure. While its story may be more conventional, it is still a bold and vibrant vision to behold.

As the film’s title would suggest, the story here takes place in a world in which magical creatures with mythic origins exist. Much like their more mundane counterparts, many of these animals are hunted down by poachers to exploit their special abilities. Lauren (Lake Bell) is a strong-willed activist fighting for the safe preservation of these beings in a sanctuary she runs housed with those she has rescued. She eventually comes to learn that the Baku, a rare and powerful creature that can harvest dreams and alter personalities, is being sought after by powerful military forces. Having known of this animal in her youth, she is highly motivated to track down the gentle beast before it can fall into the wrong hands. Her journey will take her to dangerous places and illuminate her own understanding of this environment.

There is no denying how absolutely unique the visual style of this film is. Director Dan Shaw infuses a psychedelic aesthetic that plays with the colorful imagery. It is intentionally stylized yet very fitting in efforts to ascribe an unusual and distinct tone to this setting. Motion can feel both fluid yet rigid, and scenic details are rendered in methods that feel very meticulous yet vaguely drawn. However, it all adds to the compelling characteristics of this universe. With John Caroll Kirby’s hypnotic score pulsating throughout, one can’t help but be transfixed by the surreal optics that compliments the story being told. The choices made are pretty similar to those in Shaw’s previous film “My Entire High School Sinking Into the Sea.” Much like that effort, this is another quirky presentation that uses its expressive techniques to create wholly imaginative surroundings.

At the same time, that stylization can only be carried so far, and eventually, the rather conventional tropes of the screenplay become more apparent. There’s an evident political commentary drawn from this material, whether that be real-life conservation efforts of endangered species or the intrusive nature of nefarious institutions that are aiming to eliminate dissent for personal control. These rather apparent metaphors are not nearly as creative as the animation, and they can contribute to a lethargic pace and shallow characters, the latter mainly felt due to the one-note villains. There is also a messy finale where the chaos is more of a showcase for inspiring set pieces rather than genuine emotional catharsis. Even still, the minimal amount of world-building is enough to give the right amount of texture to be engrossed. The script is the weakest part here, but it serves as a decent foundation for the more adventurous elements of the filmmaking to be laid on top of it.

There is an impressive array of voice actors in this cast, but they sadly don’t make much of an impact. The affectations come across as flat and wooden from most of the performers, struggling to create dynamic vocal performances. Bell provides a solid anchor, but she doesn’t bring anything that really connects to her portrayal on an emotional level. The same is said for the other notable talent, including serviceable turns from Grace Zabriskie and Michael Cera. The only one who makes a real impression is Peter Stormare as a sleazy faun who is constantly being suspected of double-crossing. He inhabits a slimy persona that’s captivating to watch and offers one of the few instances of actually becoming an intriguing presence. The cast, on the whole, is simply functional for the purposes of the story but not for any individual achievement in performance.

If one is looking for a genuinely thought-provoking narrative in “Cryptozoo,” that venture can be rather elusive. Its metaphors are rather overt and lack a nuance to make them more engaging. Most of the voice acting is dependable, but with few exceptions, is nowhere near extraordinary. However, all of that is in service to the dazzling visuals on display, an utterly unique presentation that holds power in its experimental beauty. That alone is enough to keep one invested, as well as some of its other elements that can be interesting but not that prodding. At the end of the day, this is yet another example of the boundaries animation can push beyond its rigid conventions, and that is worthy of celebration all on its own.