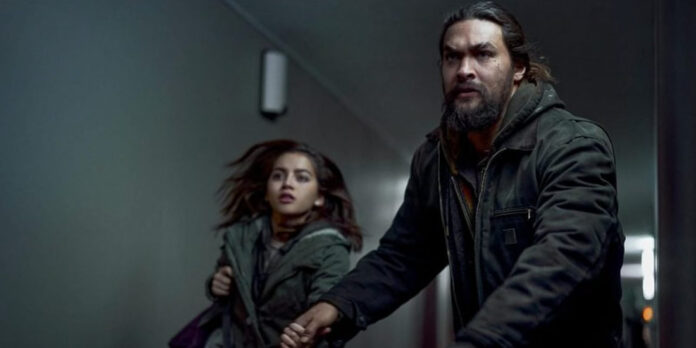 THE STORY – A man vows to bring justice to those responsible for his wife’s death while protecting the only family he has left — his daughter.

​​​Brian Andrew Mendoza makes his directorial debut with the action thriller “Sweet Girl.” Mendoza has been a producer for many years and producing films with Jason Momoa for the last ten. The pair teamed up again for this film about a widower who seeks revenge on those who brought about his wife’s death, only to end up fighting for the safety of himself and his daughter.

Ray (Jason Momoa) and Amanda Cooper (Adria Arjona) are a happy family on a camping trip with their daughter, Rachel (Isabela Merced). However, tragedy strikes when Amanda is diagnosed with cancer. They’re told that there’s a new drug that could save her, but it gets pulled from the market due to what is clearly pharmaceutical corruption. Along with the latter, the script by Philip Eisner and Gregg Hurwitz contains a messy plot of family drama, layered with action sequences and a confusing timeline with unnecessary time jumps and occasional non-chronological action.

The film intersects the issues of healthcare and capitalism and how people suffer and die because of the business side of medicine. I wish it had fully explored this issue more, but it’s more the setup for the action side of the film than the real subject.

When Ray sees the Bioprime CEO Simon Keeley (Justin Bartha) talking about the pulling of this drug on a talk show, he calls in and threatens to seek revenge if his wife dies. Six months later, Ray and Rachel are muddling through life without Amanda. Then, Ray receives a call from someone who says he can help him get justice and hints that Keeley was involved in something criminal.

When Ray goes to meet him, Rachel tags along, and both get caught up in a fight. This is just the beginning of the action as the two of them end up on the run as they try to get revenge and also stay alive. The film is littered with fight scenes as they have close run-ins, to the point of becoming repetitive. In between action sequences, Ray and Rachel fight about her unhappiness with how they’re seeking revenge and his unhappiness that she’s come along with him and refuses to leave. He’s torn between wanting to protect her and keep her with him, and both are still recovering from the loss of Amanda.

Along the way, FBI Detective Sarah Meeker (Lex Scott Davis) becomes involved through phone calls with Rachel. These calls, in which Rachel expresses her fears about what will happen to them, give Merced the opportunity for some genuinely impressive emotional moments. All of the characters are underdeveloped, but Merced’s performance gets better as the story goes along. Momoa does a decent job as well, though his role is more about his physicality than his acting, and Bartha is appropriately smug and annoying in the role of Simon.

The opening narration hints that the memories we’re seeing may not be entirely truthful, even stating, “The past is like a dream.” After a middle section that’s far too long, there’s a big twist that makes the film significantly more enjoyable. It’s not the first time this has been done (though making the comparisons would give it away), but it is fairly unique. Still, the film drones on for too long after this reveal to fully recover.

“Sweet Girl” has a dramatic score that builds suspense, though there are sometimes issues with the sound mixing, making dialogue difficult to understand. The fight scenes are adequate, but nothing exceptional, and the film’s ambiguous ending is more annoying than thought-provoking. “Sweet Girl” isn’t a bad effort for a first-time director, but it falls short of its premise, not fully exploring the interesting issues around healthcare and lack of access to it.