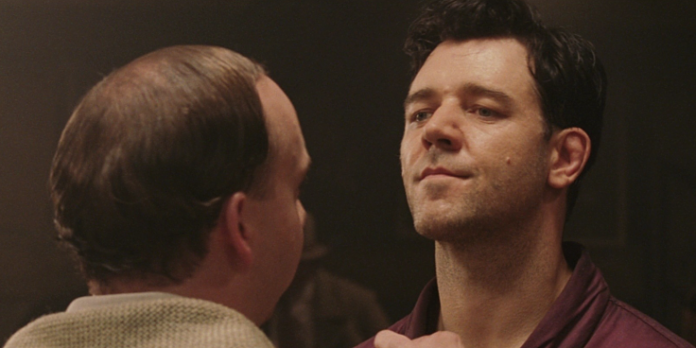 Russell Crowe and Ron Howard struck gold in their 2001 biopic about the life and troubles of John Nash in “A Beautiful Mind.” They re-teamed again in 2005 to tell the true life story of down on his luck boxer Jimmy Braddock. While the results are not as strong as their first pairing, “Cinderella Man” manages to tell it’s story honestly with quality production value all around and a trio of fantastic performances from Crowe, Paul Giamatti, and Renee Zellweger.

Starting in 1933 and taking place over the course of 4 years, James J. Braddock (Russell Crowe) is an Irish boxer known as the pride of New Jersey. He is one of the best fighters in the world until he and his family come under a string of bad luck during the Great Depression. After a few disappointing fights and breaking his right hand, his box license is revoked and now to make ends meat he must work on the docks to provide for his family otherwise, they will be torn apart during these harsh times. His manager Joe Gould (A terrific Paul Giamatti), sets him up as a last minute replacement for one last fight where Braddock is meant to be meat for a championship challenger. Motivated by his wife Mae (Renee Zellweger) and their children’s struggles, Braddock discovers a fire within himself which pushes him to succeed in the ring beyond his wildest dreams.

Russell Crowe is given a second chance to work with director Ron Howard and screenwriter Akiva Goldsman again after they all worked together on “A Beautiful Mind.” Crowe is in fine form here playing the most physically demanding role of his career while also portraying the vulnerability and endearing qualities of a struggling family man. Ron Howard’s directorial instincts are also on point as he utilizes all of his productions teams to showcase a time where boxing was as much of an attraction as the opera for those who were less fortunate to enjoy such a glamorous lifestyle. We see how the wealthiest lived and how the poorest crumbled during a time when the unemployment rate was as high as 15 million. All elements of the production design, to the costumes, are first rate in depicting an era where everyone was desperate.

If the film has any weakness, it lies with Goldsman’s screenplay as it fumbles in certain patches telling this rags to riches story in a manner which some may call cliched. The villainous champion Max Baer experiences the brunt of this as his vicious taunts and arrogant comments towards Braddock don’t come off as menacing but as laughable and disgraceful considering the real Baer is said to be nothing like the way he is portrayed in the film. Braddock’s wife Mae played here by Zellweger, is also saddled with the long-suffering wife role which we have seen time and time again. Zellweger does what she can as all of the actors do, but it still can be increasingly distracting from the real thrust of the narrative which is the boxing scenes.

The boxing scenes are where the film really comes alive and director Ron Howard pulls out all of the stops. Here his makeup, sound, editing team and cinematographer use every trick in the book to make the audience feel every blow of the fights. While the boxing may be sensationalized for the film (No one can get hit that hard that many times and keep going), it’s the emotion packed into every punch that really helps to win the audience over. It also helps that the great Paul Giamatti is at ringside mouthing off all of the energy, emotion, and angry tirades we the audience are feeling with every blow that Braddock is taking and dishing out.

“Cinderella Man” is a crowd-pleasing film which tells an incredible true story of a man who was given a second chance and overcame great hardship to rally the country together through the sport of boxing when it needed entertaining distractions the most. That second chance is something that Braddock knows not many people get in life but through the love of his family and desire to keep them together through the troubling times of The Great Depression, does he rise to the occasion. The versatile Ron Howard brilliantly directs the film eliciting great performances from his main trio of actors. The screenplay may falter in a few areas, but that doesn’t stop this inspiring story from becoming the champion of our own hearts.