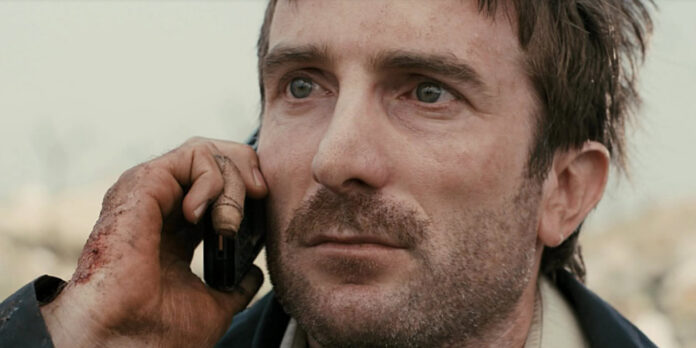 THE STORY – Bullets fly on the Atlanta freeway as armed thieves make their getaway following a bank robbery in broad daylight. Unhappy with the results, ruthless gangster Irina Vlaslov orders the men to pull off another job. One member of the team is Marcus Belmont (Anthony Mackie), a crooked cop who gets saddled with Chris Allen (Casey Affleck), his new but incorruptible police partner. As Belmont and his cohorts lay the groundwork for the heist, they come up with a devious plan to use Allen as their pawn.
​
THE CAST – Sharlto Copley, Jason Cope, David James, Vanessa Haywood, Mandla Gaduka, Kenneth Nkosi, Eugene Khumbanyiwa, Louis Minnaar & William Allen Young

​“District 9” is a film that expertly blends elements of the body horror genre, action sci-fi genre, and the sociological drama into a blistering original film that not only presents a wholly unique concept but also executes it with a high degree of technical skill. It announced to the world the acting talent that is Sharlto Copley and a singular voice in writer/director Neill Blomkamp. Equipped with a $30 million budget and backed by producer Peter Jackson, the once video game adaptation “Halo” project turned into something that we neither expected nor probably deserved.

An alien spaceship carrying over a million alien bug-like creatures known as “prawns” settles over Johannesburg South Africa. The ship stays put and the aliens within become malnourished and are soon relocated to a fenced off, militarized area known as District 9. MNU (Multinational United), the second largest weapons manufacturer in the world, is put in charge of managing the segregated alien inhabited area in an attempt to appease world relations and avoid a PR scandal. After District 9 becomes uninhabitable due to increased crime activity, MNU decides to carry out a mission to relocate the 1.8 million aliens to the newer District 10. The mission is led by Wikus wan der Merwe (Sharlto Copley) who is a bumbling, non-threatening, MNU employee that has little compassion for the aliens he is tasked with relocating. However, on the fateful day where he and other humans are serving eviction notices, a chance meeting with a prawn named Christopher Johnson, will change Wikus’s life forever.

Neill Blomkamp was initially leading the charge, along with Peter Jackson, on a “Halo” film that eventually fell through and led to the adaptation of a short film Blomkamp had directed called “Alive In Joburg.” That adaptation became “District 9” and it has since its release become one of the best science fiction films of all time to come out of Hollywood. The weaponry and prawn design have a slight “Halo” influence throughout, but that is secondary to Blomkamp and Terri Tatchell’s adapted screenplay fused with themes of apartheid, social segregation, xenophobia and human (alien?) rights. It’s a rare science fiction film that actually makes you think about a sociological issue that is impacting other parts of the world and turns the common theme of aliens being the villain of a blockbuster film on its head. Here, it’s the humans who are the representation of evil due to our fears of the unknown alien prawns and superiority complex towards them despite their clear strength advantage over us.

Blomkamp also showcases many different shooting styles in his debut from documentary sit down interviews, to found camera footage, to shaky handheld camera during the action scenes and blending CGI with practical effects. Sure it may be a tad bit too gimmicky for some, but it’s the heart within Blomkamp and Tatchell’s screenplay, where “District 9” gains its emotional power from. This is all due to the character arc of the Wikus van der Merwe character and the transformation (Literally and figuratively) he goes through as he uncovers many of the secrets within District 9. Sharlto Copley exhibits an enormous amount of range as an actor in this film and immediately became a household name due to his work here. Although the other characters in the film may not be as developed as Wikus (One character in particular known as Colonel Koobus is so one dimensional, every line he delivers is cringe worthy), it’s a testament to the power of Copley’s performance that we don’t mind as much.

“District 9” will excite and shock just as much as it will make you think and feel. What Neill Blomkamp was able to achieve with this relatively small sci-fi action film was nothing short of astonishing ($210 million at the box office and a 2009 Best Picture nomination in his debut film). One may never want to actually visit a place as dangerous as “District 9” but Blomkamp successfully transports us there, creating a world that is fully realized and symbolizes modern-day atrocities. Although he has been trying to surpass the expectations that were unfairly placed upon him after the film’s release, Blomkamp can hang his head up high as proud as any director should be that he created something this innovative, entertaining and thoughtful.