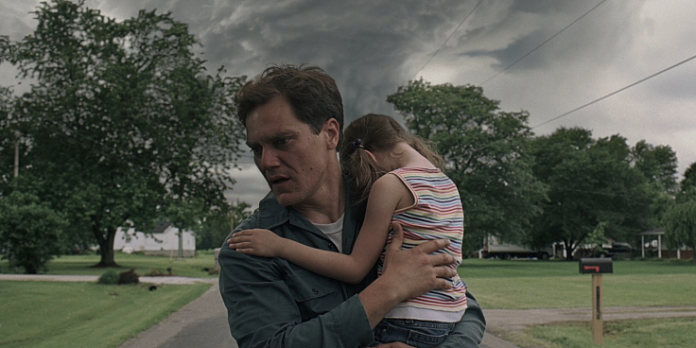 THE STORY – Curtis LaForche (Michael Shannon) lives in a small Ohio town with his loving wife (Jessica Chastain) and hearing-impaired daughter (Tova Stewart). Though money is tight, he and his family are very happy. But then, Curtis begins having terrifying dreams about an apocalypse that threatens them all. Rather than confiding in Samantha, he begins building a storm shelter in the backyard, and his strange behavior causes tension in their marriage and the surrounding community.
​
THE CAST – Michael Shannon, Jessica Chastain, Shea Whigham, Katy Mixon & Kathy Baker

​Jeff Nichols is a writer/director who perfectly knows how to capture the human experience and translate it over to the film medium. His characters are easily relatable and experience the same emotions we do. Whether it be happiness, sadness, doubt and in the case of “Take Shelter,” fear. In only his second film, Nichols proves himself to be a masterful storyteller. He takes something that most of us (Hopefully) never have to experience and creates a terrifying experience that is scarier than other any modern day horror film you are to see anytime soon.

Taking place in Ohio, Curtis (Michael Shannon) lives with his wife Samantha (Jessica Chastain) and his hearing-impaired daughter (Tova Stewart). He makes an honest living as a construction worker and has the respect of the townsfolk, including his co-worker and friend Dewart (Shea Whigham). Lately, Curtis has been experiencing apocalyptic visions and dreams of an oncoming storm which threatens to destroy everything he holds dear. Tormented by the impending disaster, Curtis starts to expand upon his fallout shelter in his backyard. However, what starts off as a precaution to protect his family starts to develop into something that is much more dangerous and personal to Curtis’s everyday life.

Despite the use of some visual effects work, “Take Shelter” is a no thrills and all chills psychological thriller. There is not even a single moment of gore in this film, and yet it still manages to make us feel just as uncomfortable and disturbed as any barbaric bloody horror film that is out there. It’s the analysis and deconstruction of Curtis’s mind that is most horrifying because on the surface he is the everyman we can all relate to. He has a good life, with a good wife, good job and a good kid. However, it all starts to slip away because of his mind, which also is slipping away. Curtis is aware that he is losing control of what is reality and what is not, and it’s with that awareness that Jeff Nichols touches deep into something that is truly terrifying. Our minds are fragile and we more often than not, take them for granted. What if one day, you were not in control and all that you once held dear was slowly fading away? That’s real horror. And though in the third act, Jeff Nichols has the opportunity to push the film into true slasher film territory, he wisely takes the humanistic approach and instead delivers upon an ending that is more powerful and ambiguous.

Michael Shannon gives the performance of his career as Curtis. One moment, he is the lovable family fan. Then the next, he is the schizophrenic nut job who fears for his family’s safety, but at what cost? It’s a balancing act that Shannon handles expertly and commits himself to in a very realistic manner that never pushes into the cartoony territory. Special mention should also be paid to Jessica Chastain who emotional grounds her character as the anchor for Curtis and is always the presence that can bring him back down to reality. This could have been another one of those “suffering wife” roles, but Chastain knows exactly how to play to her character’s strengths. Other forms of production are also in top form but it is the chilling music by David Wingo that sets the eery mood and provides a theme that you will not forget anytime soon.

“Take Shelter” is a horrifying look at mental illness, while grounding it in a human drama that never pushes far into the straight up horror genre nor loses any of its emotional power amidst all of the hysteria. Jeff Nichols has an assured handle on this story, its characters and the mood he wants to set. Some may find the pacing of the film to be slow, but stemming from its thought-provoking ideas is a power that resonates with you long after the film’s final haunting scene.