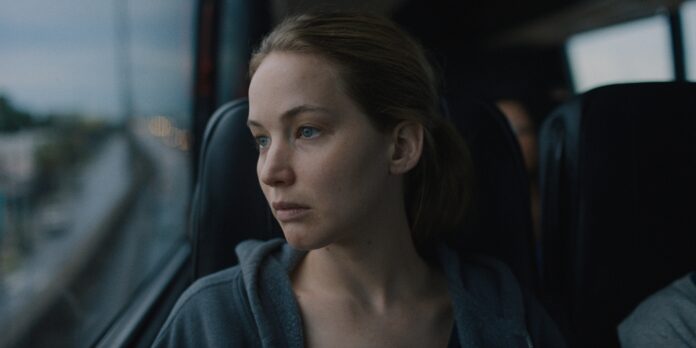 THE STORY – Lynsey, a U.S. soldier, experiences a traumatic brain injury during her tour in Afghanistan which forces her to return home. She struggles to return to her daily life with her mother as she waits for her eventual redeployment.

When it comes to breakout performances, a conversation without mentioning Jennifer Lawrence’s performance in Debra Granik’s indie drama “Winter’s Bone” would be incomplete. At age twenty, Lawrence was a prodigy. Her Oscar-nominated performance as Ree, a teenager in rural Missouri trying to hold her family and home together, showcased an exciting new talent. She gave the feeling of someone who possessed more knowledge and experience than her years. Ironically, following her breakout role as Ree, Lawrence was often cast in roles that accelerated her on-screen age – from “Silver Linings Playbook” and “American Hustle” to “Joy.” Her career took off with studio-driven roles that subverted a coming-of-age thread and moved further away from the indie world. So much so that when a film like Lila Neugebauer’s feature directorial debut “Causeway” comes along, it’s a refreshing change of pace for one of the world’s biggest movie stars. This film is beyond a star vehicle; it’s a strong two-hander that unpacks how people gravitate toward each other through the innate need to be understood.

“Causeway,” tells the story of a soldier struggling with PTSD who re-enters a life she thought she left behind for good. After an explosion in Afghanistan, Lynsey (Jennifer Lawrence) sustains a traumatic brain injury and is sent back to the U.S. The film opens with a pin-drop moment of quiet as a caretaker (Jayne Houdyshell) helps her regain mental and physical strength. This intimate introduction sets the stage for a measured character-driven story of recovery. Lynsey returns to New Orleans and moves in with her mother (Linda Emond), which does not provide the peace of mind nor the independence desired. Being back in a home of open wounds puts Lynsey face-to-face with her own past, along with the uneasy feeling that she no longer serves the purpose she found as a soldier. For Lynsey, being home is temporary. Her main priority is convincing her concerned neurologist (Stephen McKinley Henderson) to sign medical papers that would allow her to redeploy. In the meantime, she takes a job cleaning pools and wanders around a semi-familiar neighborhood, unsure of how to fit back in. The camera lingers idly behind, but when a chance meeting opens up a new path, “Causeway” jolts from slumber.

Lynsey meets James (Brian Tyree Henry), a mechanic who fixes her broken-down truck and offers her a ride home one day. Both on different journeys of personal healing, they carry their emotions close and keep a measured tab on what pieces of backstory they share. James has a personal tragedy underneath the surface that the film draws out with patience, matching the character’s hesitance to share right away. As Lynsey and James spend more time together, they ultimately begin to rely on each other like second nature. Their gravitational journeys build the foundation for a conversation-driven drama, which can be refreshingly low-key one moment, and too subdued for its own good the next. Neugebauer’s direction sometimes feels lost in thought, as if navigating a story through a daydream. For every moment of reflective silence, there is one of impassivity. The inconsistency puts up a challenge to feel the characters’ connection beyond what is explained on the surface through revealing backstories. The jolts of energy come from two thoughtful, stirring performances that say more with a look than words on a page.

Lawrence plays Lynsey with remarkable restraint and a lived-in quality that makes her performance all the more honest. You can feel this character’s sense of isolation and tenacity as she tries to navigate life after a debilitating injury. Lawrence also has stunning moments of stillness, especially in the first half of the film when she exudes micro-expressions with quiet intensity, like a rollercoaster perpetually ticking upwards. Wonderful as Lawrence is, Brian Tyree Henry’s performance as James is even more powerful. From “Atlanta” and “Widows” to “If Beale Street Could Talk” and “Eternals,” Henry is a star with remarkable range. In “Causeway,” he personifies the exercise of concealing grief. James is a complex character on a path toward healing, which takes on physical and emotional tolls from being reserved about his emotions. In a nighttime pool scene – one of the most resonating moments of the film – he lets his guard down, and that vulnerability is shattering to watch. While “Causeway” is being touted as a reminder of Lawrence’s talent, the film often plays in the realm of a steady two-hander and would not work without Henry’s incredible performance. So much of the story is about a blossoming endearing friendship and the effects of two people sharing their stories.

The screenplay (written by Luke Goebel, Ottessa Moshfegh, and Elizabeth Sanders) is full of interesting material to unpack as it’s so rooted in character. This is a story not necessarily about traumatic experiences but the way people hide them and the overwhelming loneliness that comes from doing so. Lynsey and James are two vulnerable people who carry an invincible spirit. It is through their growing bond that one starts to see the cracks until they decide to let their emotions fall by the wayside. Lawrence and Henry play the roles with ease, especially Henry, whose work is so richly detailed as he brings to life the most memorable character in the film. “Causeway” moves to the slow melody of a slice-of-life character drama, where you are not sure where everyone will end up, but they’ve experienced an awakening of some kind. Neugebauer can get a little too lost in thought, but her pensive point of view makes for some genuinely reflective storytelling that lets the chips fall where they may.