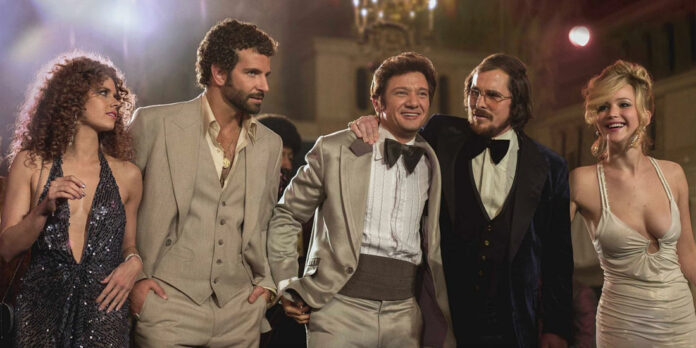 THE STORY – Con artists Irving and Sydney are forced to work for Richie, an FBI agent, who offers them amnesty. However, they are used for a sting operation that leads to the conviction of prominent people.
​
THE CAST – Amy Adams, Christian Bale, Jennifer Lawrence, Bradley Cooper & Jeremy Renner

​​I can entirely sympathize with filmgoers who might find “American Hustle” impenetrable. It makes the unusual choice to forego narrative clarity in favor of character dynamics and interactions – a decision I would normally abhor. Still, in this film, I find it thematically appropriate. It tells the story of a group of con artists and government agents swirling further and further down the whirlpool of their pursuits to the point of losing track of their original goal. As the audience is wound deeper into their double-talk and the double-dealing world, we too lose the plot’s thread and instead are forced to rely on the charm and magnetism of the characters to guide us through. It’s unconventional in its uneasy structure, but the rewards for sticking with it are plentiful.

The criminals mentioned above are Irving Rosenfeld (Christian Bale) and Sydney Prosser (Amy Adams), who have established both a working and a personal relationship in 1978. Irving, however, is married to Rosalyn (Jennifer Lawrence) and can’t bring himself to leave her for fear of losing his adopted son, whom Rosalyn had before they were married. In the middle of a scam, the pair are caught by FBI agent Richie DiMaso (Bradley Cooper). He offers them immunity if they can help him bring down other criminal undertakings. Things quickly escalate between Sydney and Richie, and the line between the con and reality begins to blur.

In a film all about the putting-on and taking-off of different identities and backgrounds, it only makes sense that the performances are the most successful element. All four of our central actors turn in career-best work. Bale plays pathetic and contemptibly low-status perfectly, even when he’s seemingly in charge of a situation. Cooper’s frantically stupid FBI agent is hilarious in every aspect, from his ridiculous hair to his manic energy. He’s like if the world’s dumbest dog was given a wish to be a human. But the real power players are the two leading women. Lawrence is genuinely wild and delightfully unpredictable, but she also knows when to bring reality into her farcical characterization. Her best moment is a comparatively quiet scene in a restaurant later in the film, where she tearfully allows a peek into her damaged inner self. The only problem with her performance is the fact that she simply reads as distractingly young. Rosalyn has to have had a long life before meeting Irving and Lawrence (who was only 23 at the time of the film’s release) is too youthful for the character to feel entirely authentic. Obviously, this factor is out of Lawrence’s control, and she does the job to the best of her exemplary abilities. The film’s best acting comes from Adams. As the true brains behind the operation, her Sydney is a performance within a performance. She makes the hysterically brilliant choice to give Sydney’s alter ego Lady Edith Greensly a notably bad British accent. The people she is conning overlook the falseness of her voice, which shows how desperate they are to believe the story she’s selling – if it benefits them. Her performance almost feels like an examination of the very process of acting – she tries on different identities until one finally works. In a film full of practically cartoonish characters, she stands out as the only real and believable human. The irony of this, given the fact that she’s the most deceptive of the con artists, is not lost on the film as it deconstructs the way people gain and desperately tries to hold onto trust in any kind of relationship.

Its overall messy structure contrasts the film’s well-defined characters. As previously mentioned, the plot is fairly unremarkable and unimportant. The shuffling of power dynamics within character interactions is the film’s true heart and purpose. Much like the improperly motivated characters, the screenplay stumbles its way through the ramshackle labyrinth of a plot. While I find this to be an effective way to tell its tale of desperation and uniquely American ingenuity, it may simply be aimless and pointless for some viewers. Still, for those willing to go along with it, it’s a hell of a ride. The dialogue features plenty of brilliant and funny lines, often illuminating how so many of these characters are just stupidly tumbling into success or misfortune. Throughout the script, there are many instances of doubling and repetition, wherein a character will say the same thing twice in a row. It’s almost as if the first time they say it, they’re trying to convince the other person that what they’re saying is accurate, and the second time they’re trying to convince themselves. The con is as much about lying to yourself as it is about tricking others.

Our merry band of do-badders is surrounded by and adorned with exceptional craft elements. The production design, costumes, makeup, and especially hair all work together in harmony to craft a sleazy, sexy ’70s world. Smartly, we often see the characters dressing up and putting their elaborate hair together while preparing for the next stage of their plan, further selling the idea that it’s in our blood as Americans to use false identities and performance to do what must be done to get along in this world.

Much like the seedy underground life it portrays, “American Hustle” is not for everyone. Its stunning performances and unified tone do a lot more to sell the story than the screenplay itself. But if you allow yourself to be taken into its grimly appealing world, you just might have the time of your life. Sometimes, crime does pay.