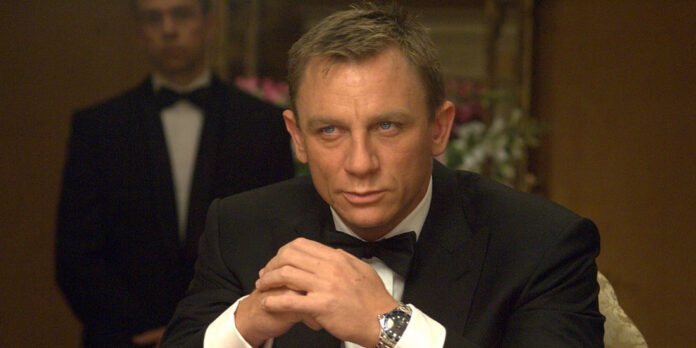 Given how much Daniel Craig has been universally celebrated for his portrayal as James Bond, it can be difficult to imagine a time in which there was serious doubt about his performance as this classic character. One only has to travel back to his initial casting announcement to remember the wave of skepticism that surrounded his induction into the series. While many criticisms were crass and flippant, there were concerns about where the franchise’s portrayal of its protagonist would be going. Reinvention is a long-running theme throughout many films in the James Bond series, but it could not possibly be more direct than a hard reboot that looked at Bond’s origins. Having finally secured the rights to the book, “Casino Royale” takes such a journey and delivers on fantastic spectacle and endearing emotion that makes it one of the most exemplary efforts ever produced in the franchise.

This film explores the early days of James Bond (Craig) and his first mission after receiving his 00-agent status. He is initially tasked with discovering who is behind a network of terrorist bombings worldwide, eventually leading him to a notorious arms dealer and shady banker named Le Chiffre (Mads Mikkelsen). Cornered and at a loss of funds, Le Chiffre sets up a poker game at the Casino Royale in Montenegro in a bid to earn back the money he’s lost playing the stock market. Bond is sent to win the game and force Le Chiffre to cooperate with the British government by giving up his clients. Accompanying him on his mission is Vesper Lynd (Eva Green), a representative of the treasury who soon finds herself falling in love with the hardened spy. However, mystery and betrayal await Bond around every corner. As the stakes escalate, he will find himself risking far more than he initially prepared to lose.

Craig’s debut performance as Bond packs as much punch as the character itself. He manages to perfectly capture the smoldering ferocity that capitalizes on the brooding aura that surrounds him. He masterfully exemplifies the brutal physicality yet also embodies the vulnerabilities that lie just beneath the surface. As stated in the film, his version of the character is a blunt instrument, but Craig can signal the complexities that exist within a damaged man. It’s certainly a much more somber version than what many audiences had been accustomed to from the most recent era of Pierce Brosnan, but he brings a welcomed breath of fresh air. Craig nails the calculated danger, the unpredictable rage, and even the shattering humanity in James Bond that has never truly been seen, and he conveys a performance that excels in presenting both the physical and mental anguish of a flawed hero.

A solid supporting cast has also been an element attached to the stronger films in the series, and this is no exception. Mikkelsen brings a quiet intensity to his villainous role, a turn that never luxuriates in histrionics and always feels calm and collected in all the right places. Green shares lovely chemistry with Craig, well-equipped to handle the barbs they throw at one another, as well as the tender moments of love that are genuinely earned. Both Green and Mikkelsen deserve their places as notable allies and foils, even if one does opine for slightly more flamboyance from the latter. Judi Dench returning as M is once again an utter delight, and Jeffrey Wright’s brief appearance as CIA operative Felix Leiter is a joy as well.

The franchise has usually relied on a solid crew to guide every production, which makes the return of Martin Campbell in the director’s chair so fitting. Having already retooled the series once before with the excellent entry “GoldenEye,” Campbell infuses the perfect tone throughout. The set pieces are assembled thrillingly, constantly engaging in ways that satisfy the spectacle without ever getting lost in the chaos. The more emotional moments aren’t treated extravagantly, and the filmmaking overall can be described as competent, if a bit anonymous. However, the directorial efforts clearly understand its priorities, and crafting exciting action sequences that communicate both large and small-scale tension is thoroughly accomplished. The editing helps to create the sense of immediacy within the story, as well as David Arnold’s extraordinary score, which deftly avoids the recognizable Bond theme until the earned final moments. It must also be noted that the signature song, “You Know My Name,” co-written and performed by Chris Cornell, is among the very best additions to the franchise’s discography (and also happens to accompany the best title sequence of the films, too).

Another unique element of this film is the strength of its screenplay. Often, Bond films have a ridiculous plot that indulges in hair-brained villain schemes with world-ending consequences. However, things are stripped down to the basics in this direct adaptation of the Ian Fleming novel, the first of its kind for the series in several decades. Regular scribes Neal Purvis and Robert Wade, along with Paul Haggis, construct a narrative that gets at the heart of the best aspects of these films. The screenplay has a complete understanding of Bond as a character and tackles his origins in an authentic manner that makes him a captivating figure. The tender relationship between him and Vesper is genuinely felt, and the humorous asides are quite effective. The third act has been a consistent problem for these films, and this one does admittedly fall victim to this trap as well. While engaging, the pacing towards the end becomes sluggish and bloated, leaving things to drag. However, it doesn’t hurt the overall narrative, and this is still one of the best scripts any Bond film has had before.

There’s just no way around the feeling that “Casino Royale” marks one of the highest points in the entire James Bond franchise. The care to reinvent this character for a new era while also holding onto some celebrated traditions is masterfully executed. The film delivers on gripping action and an enticing narrative that assembles intriguing characters and an emotional center that is very appealing. All of the performances are exceptional, but Craig finds an alluring mixture of menace and vulnerability that has never been consistently seen before in this role. The start of Craig’s tenure as this character cleared an impossibly high bar and proved to skeptics just how treasured he would become. It’s no wonder the film has the strong reputation it does, and very few other entries can challenge its status as one of the very best films in the six-decade-long history of this series.