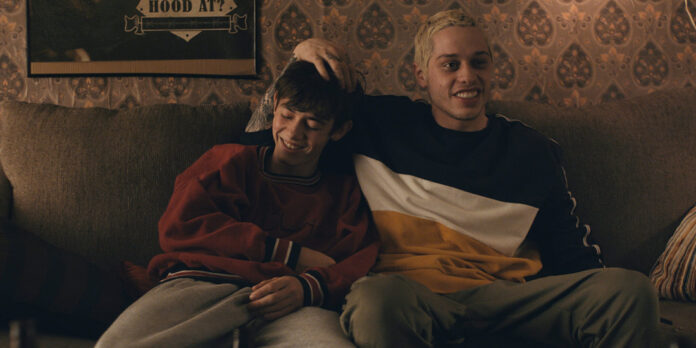 THE STORY – A drug-dealing college dropout becomes a mentor to his best friend — a straight-laced teen who idolizes him.

​​There are many times when an occasion arises for a comedian to show a different side to themselves that may not have been seen before. Often, these films feature actors who may be exceedingly popular but not taken that seriously in terms of their acting abilities. This allows them the opportunity to possibly show some range that was previously unnoticed. The most prominent example would be Adam Sandler, who has chosen opportunities to show more intriguing sides of his usual on-screen persona. One can see this in films like “Punch-Drunk Love,” “Funny People” and “Uncut Gems”. On the surface, “Big Time Adolescence” appears to be another opportunity for a recognizable comedian in Pete Davidson to follow suit. However, what’s provided turns out to be rather uninspiring.

At the center of this story is the relationship between two young men. Moe (Griffin Gluck) is a teenager who’s mostly shut off from his family and friends save for one person: Zeke (Pete Davidson). Zeke used to date Moe’s sister in high school and always got along famously with her younger brother. Even after Kate breaks up with him, Zeke maintains a close friendship with Moe for the following six years. Zeke has barely matured in that time, constantly encouraging immature behavior despite being many years Moe’s senior. Most of the time, Moe enjoys this company, which so many others are put off by. However, as things in Moe’s life become more complicated, he starts to question his long-standing friendship with this grown man and wonders if it may be bringing him more harm than good.

Davidson’s public and professional identity has been polarizing, to say the least. A lot of what he brings to Zeke as a character could be mirrored in the cultural perception of his usual performances. There’s the typical boisterous energy present here, and for some parts of the film, he does capture an oddly satisfying demeanor. However, despite the occasional one-liners that land a chuckle, much of what Davidson brings here doesn’t truly impress. There never seems to be that much layered within this character, and as such, he never really finds a way to be challenged as an actor. That’s not to say that Zeke needs to be a complete inversion of what we feel about Davidson, but he doesn’t find the subtler notes to indicate he’s playing a complex individual. His plight is understood but the pathos is shallow. The charm soon runs out, and you’re left with an unpleasant personality that doesn’t even feel sufficiently confronted by the end. Davidson does what he can, but there’s never anything in his performance that feels fresh or invigorating.

The more impressive performance belongs to Gluck. While he embodies the typical awkward teenager role, he has a lot of screen presence which brings a good amount of empathy to this role. His performance feels quite subdued and mostly devoid of histrionics, which makes his character feel more grounded. While the archetype he plays isn’t unique, there’s a sensibility he brings that’s quite endearing. The rest of the cast does a serviceable job, though some are actively bothersome. The only real standout is Jon Cryer as Moe’s father. He plays another familiar role but brings a lot of his own to make the character a compelling figure.

Jason Orley makes his debut as both writer and director, and there are occasional moments when some strong touches are shown. There are times when the charm of the writing wins you over or the style of the filmmaking is interestingly executed. Sadly, they’re few and far between, and most of this film aimlessly chugs along without much momentum. The tone of the comedy, trading on toxic masculinity and adolescent awkwardness, isn’t that charming nor does it reach a thematic conclusion that makes it feel earned. The story presented is fairly pedestrian with little opportunities given to tell something unique. This is extended to most of the characters as well, who are fairly bland. Overall, much of the effort here just contributes to a languid pace and ever so slowly drags to an underwhelming conclusion.