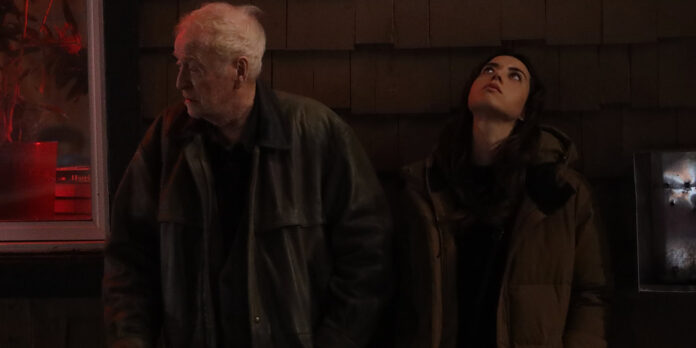 THE STORY – Lucy Stanbridge has inherited her father’s publishing house, but the ambitious would-be editor has nearly sunk it with failing titles. She discovers she is owed a book by Harris Shaw, a reclusive, cantankerous, booze-addled author who originally put the company on the map decades earlier. In a last-ditch effort to save it, Lucy and Harris release his new book and embark on a tour from hell that changes them both in ways they didn’t expect.​

​​​The fact that “Best Sellers” works as well as it does is only due to the performances given by Michael Caine and Aubrey Plaza. This isn’t to say that Lina Roessler’s new film works entirely well, but that the unlikely duo manages to salvage something out of it. With a script from Anthony Grieco that goes from a cringe-worthy comedy to an overly sentimental drama, the film is a touching one in spite of itself.

Lucy (Plaza) is desperate to save the publishing house that she inherited from her father, despite others trying to persuade her to sell it. However, after several flops, she’s not sure what she can do. When she realizes that once successful author Harris Shaw (Caine) still owes them a second book in his contract, she thinks she’s found the solution to her problems. But Harris is a grumpy and reclusive old man with little interest in other people. He only agrees to do a press tour in exchange for Lucy’s promise to publish the book without edits. This, of course, means a road trip for Lucy and Harris as they promote “The Future is X-Rated,” Harris’s new book, which certainly isn’t reaching the heights that his first novel did. He’s more of a handful than Lucy expected, and both of them are dealing with personal issues that threaten to derail the tour. There are cameos from a handful of other actors. Cary Elwes plays a NYT critic, while Scott Speedman plays a man trying to convince Lucy to sell him the company. The only one who makes a real splash is Ellen Wong as Rachel, Lucy’s assistant, who is a ray of sunshine amongst otherwise grumpy characters.

“Best Sellers” doesn’t entirely seem sure if it wants to be a comedy or a touching drama, and the lack of tonal consistency throughout it can be jarring. However, the story’s developments are generally pretty easy to guess, making for a pleasant enough viewing experience along the way. It has the sheen of a Hallmark movie (though perhaps with a larger production budget) in the worst ways while attempting to give a distorted view of the publishing industry.

Caine is the one thing that truly elevates “Best Sellers,” playing a character more complex than the script wants to allow him to be. Harris is a grumpy old British man, smoking cigars and drinking and writing on his typewriter. And yet beneath sparking chants of “Bullshite!,” Caine imbues him with an awareness of his own mortality and a longing for years past that speak to something larger than the film can. Plaza gives a more subdued performance than usually, which works well for the role, but her charm shines through well enough.

The movie does try to dig deeper into its themes and characters, addressing topics like Lucy’s complicated relationship with her father and Harris’s need for self-sabotage. However, none of this is ever able to overcome the direction. Most of the excellent content also comes in the third act, which turns into a story about the friendship and bond between Lucy and Harris. The ending is touching and might even bring about a few tears, but it’s not enough to forget the stumbling beginning. “Best Sellers” isn’t a bad movie per se– the directing can never overcome the issues with the script. The film struggles with pacing, with the beginning feeling messy and the middle section feeling repetitive. If there’s any reason to see “Best Sellers,” it’s to see Michael Caine proving that he certainly still has what it takes to deliver a compelling performance at 88 years of age.