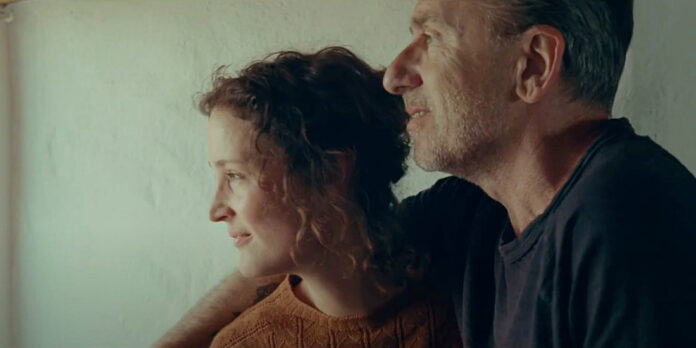 THE STORY – Two American filmmakers retreat to Fårö island for the summer and hope to find inspiration where Bergman shot his most celebrated films. As the days pass by, the lines between fantasy and reality begin to blur, and the couple is torn apart.

​​​​Just off the coast of Sweden lies the small island of Fårö, a tranquil place offering visitors a picturesque getaway far from the noisy bustle of Stockholm. In addition, Fårö is also a world-famous mecca for cineastes, revered as the site where legendary film director Ingmar Bergman lived and died, as well as providing the setting for six of his most famous works, including “Persona” and “Scenes from a Marriage.”

Fårö also serves as the title locale in “Bergman Island,” the first English-language film from acclaimed French writer/director Mia Hansen-Løve, whose latest romantic tale focuses on a filmmaking couple — director Tony (Tim Roth) and writer Chris (Vicky Krieps) — who decamp on Fårö in hopes that the Bergman vibe will inspire them as they conceive their next projects. To the casual observer, Tony, and Chris, with their easy social banter, appear to be a loving couple, but certain moments, whether it is in a pause or a glance, seem to suggest that all is not well in their relationship. It is not for nothing that their landlady points out that the bed on which they sleep was used in “Scenes from a Marriage,” the film “that made millions of people divorce.”

As in many of her films, Hansen-Løve’s pacing of “Bergman Island” is, shall we say, leisurely. Tony and Chris have dinner with a Bergman expert. Tony rides on a Bergman tour bus (“The Bergman Safari”), while Chris has her own private Bergman tour with a local film student. The tourist’s guide of Fårö is lovely, but it takes a full 55 minutes until we get to the meat of “Bergman Island,” the moment when Chris, stuck on finding the ending to her screenplay “The White Dress,” relates the story scene-by-scene to Tony.

At that moment, Chris’ script comes to life and becomes its own film-within-a-film. Her protagonist, Amy (Mia Wasikowska), a young filmmaker (and likely surrogate for Chris), travels to Fårö for a destination wedding and finds herself unexpectedly reunited with her first love, Joseph (Anders Danielsen Lie), who is now in a committed relationship back home. Like Chris, Amy is searching for a balance between artistic creativity and emotional fulfillment, and finding out just what might have been with Joseph could provide just the inspiration she needs.

There is a lot to like in “Bergman Island.” Hansen-Løve certainly has a way with dialogue, and her direction of actors is superb. Krieps and Roth, for example, are able to communicate the weary tolerance that people who may have stayed too long with each other can exude. In addition, Wasikowska and Danielsen Lie (both terrific) are thoroughly convincing as a couple with a past and wish that they can finally come together (at least for this weekend).

Smartly, Hansen-Løve has avoided emulating an actual Bergman film instead of taking several of the emotional themes present in some of Bergman’s darker films and appropriating them into a contemporary romantic work. She adds additional complexity with a third-act switcheroo that is even more meta than the other two stories. And there’s even a fourth layer if you consider Hansen-Løve’s long-time real-life relationship with director Olivier Assayas, a pairing that has echoes of Chris and Tony here.

But between moments of genuine character insight, “Bergman Island” gives off the feeling of spinning its wheels far too often. Several scenes, particularly in the Chris and Tony sections, begin promisingly but simply trail off, and an overall lack of a strong narrative drive keeps the audience at arm’s length for far too long. There is a gem of a story locked somewhere within “Bergman Island,” which makes the missed opportunities here seem all the more disappointing.