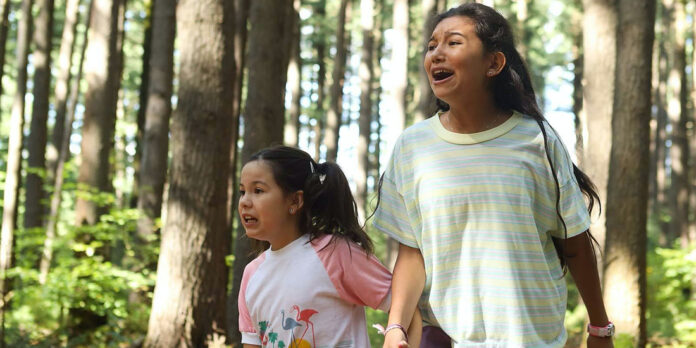 THE STORY – Based on true events, Tracey Deer’s debut feature chronicles the 78-day standoff between two Mohawk communities and government forces in 1990 in Quebec.

​​​​​​​​For 78 days in the summer of 1990, two indigenous Mohawk communities in Quebec protested against a proposed golf course expansion and condominium development that would decimate a forest and an ancestral burial ground. While it began as a peaceful protest, it didn’t take long for the city of Oka’s mayor to bring in armed forces, citing alleged criminal activity. Sound familiar? While most, if not all, Americans may be unfamiliar with the Oka Crisis, the broad strokes of it should sound familiar to those of us who lived through the summer of 2020. That parallel alone would be enough to build a strong film around, but Tracey Deer’s narrative feature debut “Beans” finds a perfect way into this period of history: A twelve-year-old Mohawk girl who goes by the nickname of Beans.

Most people can’t pronounce her given name, so Beans encourages the use of her nickname, even in the film’s opening scene at a fancy-looking private school. Beans (Kiawentiio) is bright and enthusiastic but stumbles when asked why she wants to attend this particular school. Her mother assures her that it’s her own fault for not having prepared Beans for that question, but it’s clear that both of them have a lot riding on acceptance to this school. At home, Beans and her younger sister Ruby (Violah Beauvais), who are very close, offer to help their mom and dad bring food and other supplies to the group organizing the standoff behind a barricade, but once there, the standoff explodes into chaos. This triggers something in Beans, and she seeks out local mean girl April (Paulina Alexis) in the hopes of learning how to be tough.

Kiawentiio is instantly endearing in the title role, possessing a beautifully wide open face that seems incapable of hiding anything she’s feeling. It hurts to watch her try to become a mean girl because it doesn’t fit her fun-loving, optimistic personality. But then, that’s the way of coming-of-age stories – you have to try on a persona or two in order to find your true self. In the intense societal situation Beans is thrust into, she feels even more vulnerable than she did as a bullied kid, and seeking out her bully for advice seems logical. A pivotal scene finds April inviting Beans into her private sanctuary and hitting her with a switch across her legs, telling her “if you can’t feel pain, then no one can hurt you.” It’s painful to watch, and even more painful later on when Beans takes this a step further, inflicting pain on herself in order to feel a sense of control amidst the chaos. Kiawentiio is a livewire in this scene, a direct conduit to the determination, relief, and physical pain Beans feels in the moment.

Kiawentiio carries the film on her shoulders remarkably well, but she’s surrounded by an ensemble that is just as strong. While everyone has moments that can read as stiff, they each also find something deep and true about their characters. Alexis finds the hurt underlying April’s meanness in a way that makes you genuinely care for her by the end, beautifully playing a late scene in which she realizes genuine protective feelings towards Beans. As Beans’s mother, Rainbow Dickerson is fantastic – a rock-solid model for her daughters believably pushed to her breaking point. Beauvais is a ray of light as the youngest member of the family – her hurt when Beans starts to hang out with older teens is palpable.

Providing a steady hand through all the drama, Deer proves herself a talented filmmaker. The film is clearly deeply personal to her, and that shows through the deeply felt screenplay and the well-balanced directing. The scenes focusing on the violence of the crisis are harrowing – one scene where the police stand by and do nothing as the Mohawk women drive their children to the supposed safety of a nearby town only to have bystanders throw rocks at their cars is especially difficult to watch. But these scenes hit their mark so strongly in part because of the patient, intimate work Deer does in the scenes where Beans is living her life, trying to figure out who she is, and what her place in the world is. Contrasting her with the brash, seemingly callous April works wonders for both characters as they slowly realize that they have more in common with each other than they thought, simultaneously opening up each other’s worlds.

With Kiawentiio’s sensitive performance at its center, “Beans” accumulates power as it goes thanks to Deer’s thoughtful direction. The coming-of-age beats of the script may be somewhat typical but are put in sharp relief by the social unrest going on around them. When combined with the visceral child’s eye view of the protests, the film is able to give us a new perspective on both of its story halves. That’s quite an accomplishment, one that makes “Beans” easy to appreciate, and even easier to enjoy.