“THE BOYS IN THE BAND” 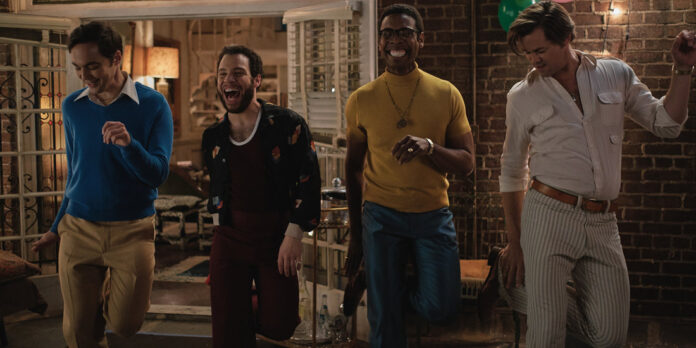 Mart Crowley’s words had the sting of truth to them when “The Boys in the Band” premiered Off-Broadway in 1968, and still did in William Friedkin’s 1970 film adaptation. Even more time has passed between then and the new film version of the play, directed by Joe Mantello after his recent Broadway revival, but Crowley’s words still sting even now. Times may have changed, and we have had many more representations of gay men on stage and on-screen since the play’s groundbreaking premiere in 1968, but most of the problems gay men faced then still exist today. We still agonize about coming out, still lust after unattainable straight boys, still cattily lash out at each other while wallowing in self-pity over our own insecurities and failings. Which is what makes up the bulk of “The Boys in the Band”.

It is the Summer of 1968, and the newly-sober Michael (Jim Parsons) is hosting a birthday party for his best frenemy Harold (Zachary Quinto). On the guest list are Michael’s boyfriend Donald (Matthew Bomer), who has moved out of Manhattan to get away from city life; Emory (Robin de Jesús), an effeminate interior designer from the Bronx; Bernard (Michael Benjamin Washington), an African American bookworm; and Larry (Andrew Rannells), a photographer who lusts after multiple sex partners, and his live-in boyfriend Hank (Tuc Watkins), who is in the process of divorcing his wife, whom he left for Larry. There’s also Emory’s present for Harold – a hooker dressed as a cowboy (Charlie Carver), and a late addition: Michael’s straight former college roommate Alan (Brian Hutchison), who is in the city from DC and calls Michael just before the party, weeping that he needs to speak with him.

It is this last guest that ends up sparking most of the drama, as Michael’s worlds collide in a violent fashion and he starts drinking and lashing out at his friends, forcing them to play a parlor game where they have to call someone who they have loved and tell them they love them. In the director’s chair for only his second feature, Mantello proves adept at heightening the mood in every scene. Known for his strong work with actors in the theater, and having directed this exact cast on Broadway in 2018, he uses the intimacy of film to probe these characters as they at first perform for each other and then slowly reveal their true, bruised selves. The early party scenes feel loose and joyous, a document of a time when gay men weren’t held back by the scourge of AIDS. But in the second half, as everyone gets more and more drunk, Mantello uses slow zooms and close-ups to get inside these men’s minds, throwing in some artfully shot flashbacks to focus in on moments in their lives when they had to hide their innermost desires, even while giving in to them on some level.

Mantello is helped, of course, by his cast. Having performed this piece for three months together on Broadway, their chemistry is palpable, and they all feel very much at home in the skin of their characters. Washington and de Jesús in particular do wonderful work, making the deeply felt bond between Bernard and Emory one of the central relationships in this version of the story (Emory was originally written as white). Each of them gets a killer monologue that sends them on a spiral of hope and regret that becomes even more touching when they try to lift each other. Rannells and Watkins believably play a couple with opposing views of what being a couple means, who end up surprised by how much they actually love each other. If the film feels a bit too much like a relic of the pity and self-hate of gay men in the 60s, it comes down to the nominal leads. Quinto is the only one who feels like he’s playing a character as opposed to a real person, his archness coming across as a bit too stiff and unnatural. Parsons, although deftly playing Michael’s deepening depression as he gets drunker in the middle of the film, overplays the climactic moment in a way that feels more calibrated to the stage than the screen.

“The Boys in the Band” is a document of a specific time and place. It is a time and place that we, unfortunately, have too few documents of and that alone makes it valuable. Some may feel that the material hasn’t aged well, that we have moved beyond the specific kind of closeting presented here. To those people, I can only say: Look around. People are still closeted. People still wrestle with a religion that has told them from the beginning of their lives that what they feel is an unnatural sin. Gay men in particular still have trouble navigating monogamy and understanding that you can love someone and only want to be with them but still desire sex with other people. Sure, this may not be as nuanced or layered a depiction of gay men as we have come to enjoy (and perhaps expect) in the present day, but as a piece of history, it still rings true thanks to Mantello’s well-judged direction and the grounded, committed performances of its all-star ensemble. If the downbeat ending goes on for a bit too long, at least it serves as a reminder: We won’t always have to feel this way. Even in our darkest hour, there is still hope for the future.