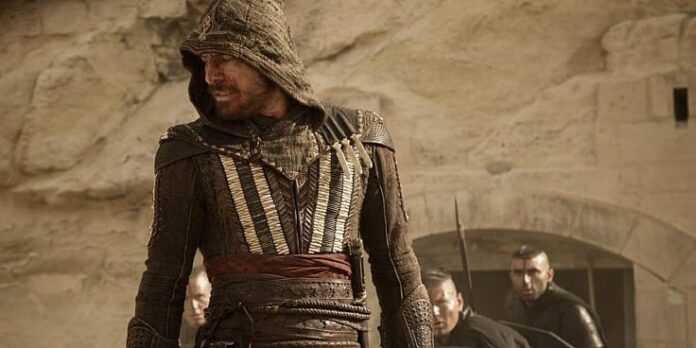 THE STORY – Cal Lynch travels back in time to 15th-century Spain through a revolutionary technology that unlocks the genetic memories contained in his DNA. There, he lives out the experiences of Aguilar de Nerha, a distant relative who’s also a member of the Assassins, a secret society that fights to protect free will from the power-hungry Templar Order. Transformed by the past, Cal begins to gain the knowledge and physical skills necessary to battle the oppressive organization in the present.
​
THE CAST – Michael Fassbender, Marion Cotillard, Jeremy Irons, Brendan Gleeson, Charlotte Rampling & Michael K. Williams

​I hesitate to say that “Assassin’s Creed” is the best video game adaptation to the screen of all time, but it might be. It certainly does not have much competition as Hollywood has still not managed over all of these years to create a truly great piece of cinema from the video game world. However, director Justin Kurzel, stars Michael Fassbender, Marion Cotillard, and cinematographer Adam Arkapaw (Who all collaborated last year on Kurzel’s “Macbeth” film) all take the project so seriously that it becomes a highlight and detriment of the film. “Assassin’s Creed” is a very complicated, completely unbelievable and silly story that blends many genres such as history, science fiction, action and drama all into one package with mixed results. While this is not surprising, considering this is Hollywood’s attempt at another video game adaptation, it’s certainly admirable in some aspects.

Bear with me now for the plot to this movie is pretty ridiculous, but here goes nothing…”Assassin’s Creed” tells the story of an ancient rivalry between the Templars who wish to rule the world by acquiring an object referred to as the “Apple Of Eden” (Which gives its holder the power over free will) and the Assassins. Career criminal Callum Lynch (Michael Fassbender) is about to be executed in the present day when he is rescued by Alan Rikkin (Jeremy Irons), the CEO of Abstergo Industries, and his daughter Sophia Rikkin (Marion Cotillard) who is a scientist in charge of the Animus project. They intend to use Cal for this project so that he can enter the past and relive the memories of his ancestor Aguilar de Nerha (Also played by Fassbender speaking Spanish with English subtitles) in Spain during the time of Spanish Inquisition. The goal is to use the memories of the past to find the present day location of the Apple of Eden which will give the Templars the advantage in their ancient battle with the Assassins. However, the deeper Cal goes into the past, the more he becomes aware of the present and decides to take control of his own destiny.

Did I do a good job? I hope so because the story of “Assassin’s Creed” is a pretty wild concept that does not totally work but there are some positives here. Cal has a relationship with his father (Played by Brendan Gleeson) that touches upon themes of choice as it pertains to violence and aggression that are interesting and helps to give the film a central message. Fassbender, in particular, is giving the role everything he has both physically and emotionally while everyone else seems to be wasted in small bit roles (Such as Michael K. Williams as another prisoner and Charlotte Rampling in a role that is both confusing and underdeveloped). The technical aspects of the production are mostly top notch. Special praise must be given to Adam Arkapaw who brings the same level of artistry from “Macbeth” over to “Assassin’s Creed” with a contrasting color palette and excellent lighting. It’s definitely the best-looking video game film ever shot. The fight choreography is also exhilarating and very well staged.

However, where “Assassin’s Creed” fails (As most video game films do) is in its pacing and juggling of the many plot elements introduced through the film’s premise. It’s not hard to imagine that there is an extended cut of this film which exists somewhere that gives more screentime to the many secondary characters and helps to flesh out their motivations and give backing to the film’s themes. Kurzel may shoot the film well and present it in a manner that is serious, but it lacks narrative coherence. So while, I will not call “Assassin’s Creed” a total failure as I have other video game adaptations in the past, it is far from perfect. If anything it is an admirable effort that tries a lot harder than other films have tried in the past and for that, it deserves at least a watch without being completely written off.