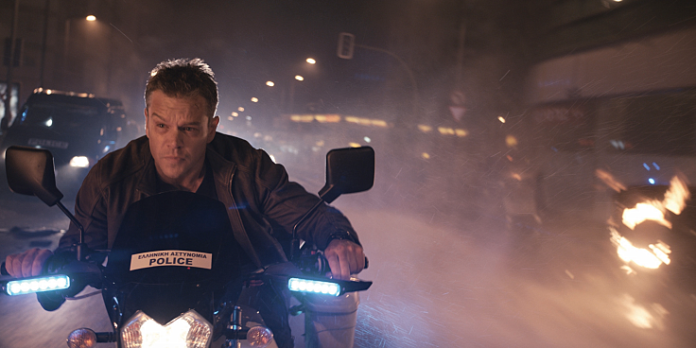 THE STORY – It’s been 10 years since Jason Bourne (Matt Damon) walked away from the agency that trained him to become a deadly weapon. Hoping to draw him out of the shadows, CIA director Robert Dewey assigns hacker and counterinsurgency expert Heather Lee to find him. Lee suspects that former operative Nicky Parsons is also looking for him. As she begins tracking the duo, Bourne finds himself back in action battling a sinister network that utilizes terror and technology to maintain unchecked power.
​
THE CAST – Matt Damon, Alicia Vikander, Tommy Lee Jones, Julia Stiles, Riz Ahmed & Vincent Cassel

This seems to be the year of unnecessary sequels. We got one with “Finding Dory” (Even though that film turned out quite alright). We’ve got another coming this year with “Blair Witch.” And now we have another entry in the Bourne Franchise with “Jason Bourne.” Unlike “The Bourne Legacy” which did not feature Matt Damon or director Paul Greengrass, this fifth entry in the series brings back both of those two talents with mixed results. “Extreme Ways” are certainly back again, but should we care?

​It has been ten years since the events of “The Bourne Ultimatum.” Jason Bourne was shot and left for dead and has since moved on with his life, fighting in underground unsanctioned fights for money in far off places of the world. He’s keeping his head and down and trying to avoid capture by the CIA who tried to have him exterminated time and time again. CIA Director Robert Dewey (Tommy Lee Jones) promotes Heather Lee (Alicia Vikander) from within the agency to find Jason after Bourne is tied back to a hack on the agency by Nikki Parsons (Julia Stiles). But that’s not all that Dewey has done. He has also hired an assassin with a personal vendetta against Bourne (Vincent Cassel), to track down and kill Parsons and Bourne the first chance the asset gets.

There are a lot of problems with “Jason Bourne” (Dropping the “The Bourne” from its title). The first glaring omission is the tightness of the screenplay which can be attributed towards writer Tony Gilroy not returning for this installment. This entry into the series never matches the first three in its stakes nor execution of furthering the plot for the lead character. Sure, there is a storyline involving Jason Bourne’s father that pushes Bourne back into action. But it feels like a sorry excuse to bring this character out of hiding once again, especially when you consider how satisfyingly “The Bourne Ultimatum” managed to wrap up the original trilogy. We all felt that “The Bourne Legacy” was simply a misstep for the series and fans have come to forget its very existence. Unfortunately, the stain that “Jason Bourne” leaves all over the series will be harder to wash off. There is one betrayal of the Jason Bourne character towards the end of the film which undoes the entire thematic resonance from “The Bourne Ultimatum” with very little care or consequence.

The other problems I have with the film are more trivial than anything from Alicia Vikander’s terrible American accent to the film copying the exact same plot from the first three films and not bringing anything new to the table in terms of artistry, creativity or excitement. So what does the film get right? Well, first and foremost having Matt Damon back in what is probably his most famous role is a joy, no matter how underwhelming the film around him manages to be. Even at age 45, he appears to have not aged a day since “The Bourne Ultimatum” and carries the entire film on his shoulders through its dramatic and action heavy bits. And speaking of which, the action in this movie is mightily impressive. The whole film centers around two action set pieces, one taking place in Greece during a riot and the other across the streets of Las Vegas. Both are complex and exciting and Greengrass (This time partnering up with cinematographer Barry Ackroyd) shoots the hell out of these scenes showcasing his improvement in this area with less shaky handheld camerawork than his first two films in the series.

It’s a shame that a series as beloved and consistently fun as “The Bourne Trilogy” had to go and be reduced a former shell of itself with entries such as “The Bourne Legacy” and now “Jason Bourne.” While the return of Greengrass and Matt Damon help to keep the film on life support, an unfocused and wholly unnecessary script by Greengrass and editor Christopher Rouse threatens to knock out every other aspect of production. “Jason Bourne” is not a terrible film and it’s not a great film. The honest truth (To play off of that famous Moby track which plays at the end of the credits in all of the films within the series), is that I would not stand in line for this and keep your fond memories of the original trilogy intact if you can.