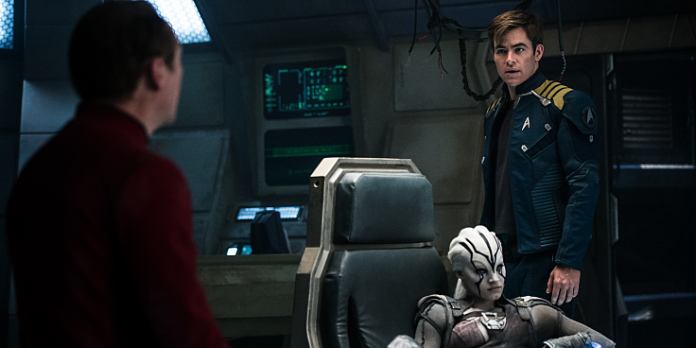 THE STORY – A surprise attack in outer space forces the Enterprise to crash-land on a mysterious world. The assault came from Krall (Idris Elba), a lizard-like dictator who derives his energy by sucking the life out of his victims. Krall needs an ancient and valuable artifact that’s aboard the badly damaged starship. Left stranded in a rugged wilderness, Kirk (Chris Pine), Spock (Zachary Quinto) and the rest of the crew must now battle a deadly alien race while trying to find a way off their hostile planet.
​
THE CAST – Chris Pine, Zachary Quinto, Karl Urban, Zoe Saldana, Anton Yelchin, John Cho, Simon Pegg & Idris Elba

First and foremost, I am not a Trekkie. In fact, my first exposure to the Star Trek universe was back in 2009 when J.J. Abrams rebooted the series with a whole new cast, creative direction, and timeline for the series. That was a fantastic film which was followed up by a still spectacular (But less so) sequel “Star Trek: Into Darkness,” featuring Benedict Cumberbatch and a re-telling of “The Wrath Of Khan” storyline. “Star Trek Beyond” finds itself with a new duo of writers and Fast and the Furious director Justin Lin at the helm along with an old school Star Trek-like adventure which I’m told pays homage to the original series in more ways than one while forging a new identity for itself, instilling that this franchise has legs to continue beyond J.J. Abram’s creative vision for the first two films. But is it any good?

​It has been three years on a five-year mission in deep space for the crew of the Enterprise and Captain James T. Kirk (Chris Pine) is starting to question his purpose as he approaches the same age of his father when he died. Before he can break the news to his buddy Spock (Zachary Quinto) about his plans to leave the captain’s chair for a more stable job, the ship comes across a lone survivor of a recent skirmish in space with an unknown enemy. The crew embarks to save the lives of those being oppressed by Krall (Idris Elba), who is really after an ancient artifact that the Enterprise has recently taken into their possession. Krall attacks the ship and the crew is forced to abandon it, leaving them separated and scattered throughout an unknown planet. Now Kirk, Spock, Bones (Karl Urban), Uhura (Zoe Saldana), Scotty (Simon Pegg), Sulu (John Cho), and Chekov (Anton Yelchin) are on their own in small groups, each trying to find their way back to one another in hopes of taking out Krall with the help of a warrior named Jaylah (Sofia Boutella) who has a personal vendetta against the mysterious Krall hellbent on federation destruction.

My first problem that stems from this new entry in the series, is Justin Lin’s vision for the story and execution. The visuals don’t seem anywhere near as polished as what J.J. Abrams gave us previously (Say goodbye to the lens flares) and the action scenes are muddled and shot in that irritating up-close manner where the fight choreography is tough to decipher what exactly is going on. The special effects are also nothing to necessarily get excited over as they don’t break any new ground either. Further showcasing Lin’s incapability of handling material such as this, there are more than a few dramatic beats which manage to come off awkwardly and without any room to allow them to breathe (One moment, in particular, is where Chris Pine’s Captain Kirk has to decide whether or not to shoot an unknown friend or foe).

Where this film shines once again is with its perfect casting and the writing by Simon Pegg and Doug Jung which is playful, fun, and respects the history and lore of this series. There are references to previous films within the franchise which die-hard Trekkie fans will geek out over and a fitting tribute to the late Leonard Nimoy (Spock Prime) who tragically passed away last year. The interplay between the cast members is just as high as ever and their energy and well-defined characters are what keeps the film afloat and enjoyable throughout. There is a focus on the characters within the framework of the story and how they are stronger against opposing forces when they are together. After three films of getting to know these individuals, there is a true personal investment in them which makes it easier to root for them and overcome any other narrative stumbling blocks the film surrounding them may have.

While “Star Trek Beyond” may not be as good as the previous two films, it does prove that this series has legs to go beyond (No pun intended) the vision of J.J. Abrams even if I personally felt that vision was not as bold and as inspired. Where I felt the first two films could really stand on their own as artistic action films, “Star Trek Beyond” simply feels like a typical summer blockbuster that is at least not a total disaster of a film. Justin Lin does what he can, but it’s the film’s writing and still incredible cast that manages to steer the ship straight and propel this series forward. On a final note, I do want to simply say that the recent passing of Anton Yelchin does not seem to be a component of this film (Minus a respectful “For Anton” at the end of credits) and that nothing appears to have been altered in the final cut with regards to his performance. He was a very talented young actor and he will sorely be missed within these films and in the other films still to come.