A History Of Shakespeare At The Oscars 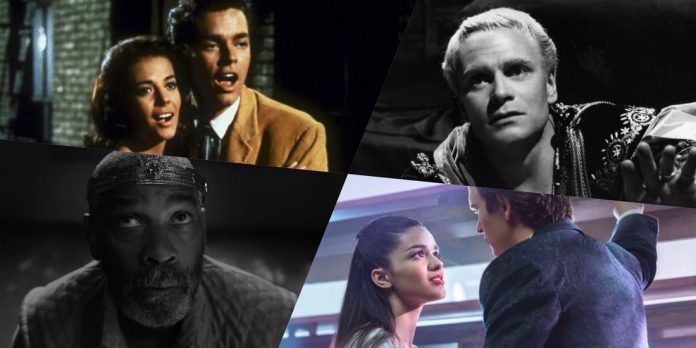 Direct adaptations of Shakespeare’s work, ones that have maintained his dialogue and appointed setting, have made relatively scant appearances at the Academy Awards. The first to do so was the opulently designed “A Midsummer Night’s Dream” (1935), directed by Max Reinhardt and William Dieterle, starring James Cagney, Mickey Rooney, Dick Powell, Joe E. Brown, and Olivia De Havilland in her screen debut. This film is noted for a feat never before and never again repeated in Oscar history: winning the award for Best Cinematography due to a campaign of write-in voting. The Academy soon after stopped accepting write-in votes after this took place.

Over the following years, Hollywood struggled to devise a system that would allow its biggest names to star in Shakespeare adaptations without classical training. In 1936, George Cukor directed “Queen-of-the-Lot” Norma Shearer (wife of Irving Thalberg) as Juliet alongside Leslie Howard’s Romeo at their respective ages of 34 and 43. The film was a box office and critical failure due mainly to the miscasting of its leads. Over the next decade, Shakespeare seemed to be persona non grata in Hollywood, that is until a certain Englishman entered the field.

Laurence Olivier’s first screen appearance in a Shakespeare film was in a 1936 adaptation of “As You Like It.” In America, Olivier broke out in his roles as Heathcliff in “Wuthering Heights” (1939) and Mr.DeWinter in “Rebecca” (1940). His greatest legacy came in his cinematic Shakespeare adaptations that have stood the test of time. “Henry V” (1944) was released at the tail-end of WWII, and like its titular character on St Crispin’s Day, served as a morale booster for a war-torn Britain in glorious Technicolor. While nominated for four Oscars, Olivier won a special honorary award for serving as the film’s producer, director, and lead actor. Four years later, Olivier multiplied this glory with his adaptation of “Hamlet,” for which he won the award Best Actor and Best Picture. Also recognized was the film’s stark, brutalist production design filmed in black-and-white. These interiors, so far from the lavish set pieces of “A Midsummer Night’s Dream,” have since been emulated in such films as Derek Jarman’s “Edward II” (1991) and Joel Coen’s recent effort “The Tragedy Of Macbeth” (2021). Still, the film was eluded by that coveted Best Adapted Screenplay nomination. At the time, Shakespeare lovers were put-off by Olivier’s trimming of the play’s four-hour runtime to a mere two hours. Still, Olivier’s role as the Prince of Denmark is the only performance of a Shakespearian character to have ever won an Oscar. Olivier would complete the triad and cross the spectrum of morality in 1955 with his adaptation of “Richard III,” in which he also starred in the title role. Only Olivier’s performance was recognized with a nomination at the Oscars, while it received significant acclaim by British and international awards bodies.

In the meantime, Hollywood had taken a few more stabs at placing its stars within Shakespearian adaptations, such as “Julius Caesar” (1953), for which Marlon Brand received his third consecutive nomination for Best Actor in a Leading Role, and “The Taming of the Shrew “(1967) directed by Franco Zeffirelli, starring dynamic duo Taylor and Burton as feuding lovers. The 1960s were dominated by one classic play in particular. In 1961, Robert Wise directed an adaptation of Bernstein and Sondheim’s adaptation of “Romeo and Juliet,” resulting in the beloved movie-musical “West Side Story.” The film was nominated for eleven Oscars and lost only one (once again, Best Adapted Screenplay to “Judgement at Nuremberg”). Wise and choreographer Jerome Robbins did something hitherto unheard of through gang violence, modern dance, and love-at-first-sight drama: they made Shakespeare cool. Seven years later, Zeffirelli would take a page out of the same book through his own faithful adaptation of Romeo and Juliet, further radicalizing the production by casting actual teenagers Leonard Whiting and Olivia Hussey in the title roles. It is the last Shakespearian adaption to be nominated for Best Picture to date.

The 1990s was an absolute hay-day for Shakespeare adaptions. During this decade, the plays found themselves taking place in several different centuries and countries and became, for lack of a better word, sexy. Kenneth Branagh (Olivier’s lookalike and spiritual successor) began his career with an adaptation of “Henry V” (1989) comparable to Olivier’s. He soon sought other settings (and bigger names) for his adaptations of “Much Ado About Nothing” (1993) and “Hamlet” (1996), the latter which, at over four hours, is the only direct adaption of Shakespeare to receive a nomination for Best Adapted Screenplay.

Many of Shakespeare’s plays have been handled at a distance, forgoing their name and distinct use of the English language. Like those early silent films, the central themes are brought front and center. This era saw numerous teen drama/comedies inspired by these familiar tales, such as “10 Things I Hate About You” (“The Taming of the Shrew”/1999) and “O” (“Othello”/2001). “The Lion King” (1994) borrows directly from “Hamlet” and won two Oscars for Best Original Score and Best Original Song (“Can You Feel the Love Tonight?”). Australian eccentric Baz Luhrmann took teen idols Claire Danes and Leonardo DiCaprio and placed them in a flamboyant, extravagant, uber-Catholic Verona Beach, California in “Romeo + Juliet” (1996). Akira Kurosawa was an obvious admirer with titles such as “Throne of Blood” (“Macbeth”/1957) and “Ran” (“King Lear”/1985), while Gus Van Sant’s new queer cinema classic “My Own Private Idaho” (1991) is based on “Henry IV” Parts 1 & 2. He even found his way to space, with his mystical The Tempest serving as the basis for “Forbidden Planet” (1956). Orson Welles directly adapted “Henry IV” Parts 1 & 2 from the perspective of Falstaff in “The Chimes at Midnight” (1966) and “Hamlet/Oedipus Rex” into “The Magnificent Ambersons” (1942). Almost as a celebration of his legacy, the century was practically capped-off with a tribute to the Bard with the Best Picture-winning “Shakespeare in Love” (1998).

This year, Shakespeare is almost certain to make an appearance at the Academy Awards. The most obvious, of course, is the aforementioned “The Tragedy Of Macbeth” by first-time solo director Joel Coen (without involvement from his brother Ethan Coen). The film has so far been recognized for its exceptional cinematography, production design, and lead performance by Denzel Washington, which has been nominated by the Golden Globes, Critics Choice, and Screen Actors Guild Association. Coen’s screenplay adaptation even received a Writers Guild Of American nomination recently and has many wondering if a Shakespeare adaptation can find itself once again nominated at the Oscars for Best Adapted Screenplay. This season may also see a new generation fall for the Bard through Spielberg’s new adaptation of “West Side Story,” or even consider “Hamlet’s” themes of betrayal and tyranny woven into Dennis Villeneuve’s adaptation of Frank Herbert’s “Dune.” It may not be a direct adaptation of Shakespeare but through his works, a film lover can continually discover many new films are linked together by one mysterious, enigmatic man, whose writing has managed to inspire artists in practically every medium.

Have you seen “The Tragedy Of Macbeth” or “West Side Story” yet? If so, what did you think of them as Shakespeare adaptations? What Oscar nominations do you think they will receive? Let us know your thoughts in the comments section below or on our Twitter account.