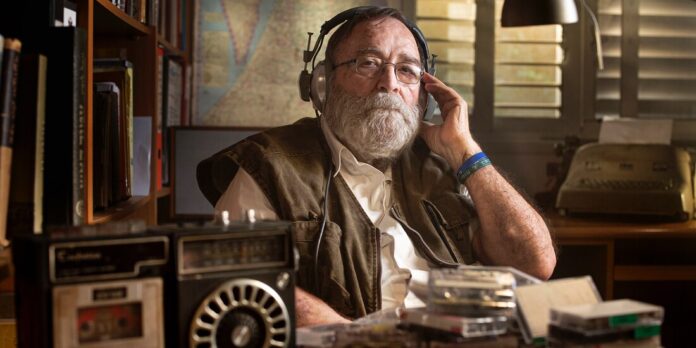 THE STORY – The tape-recorded words “erase it” take on new weight in the context of history and war. When the state of Israel was established in 1948, war broke out and hundreds of Palestinian villages were depopulated in its aftermath. Israelis know this as the War of Independence. Palestinians call it “Nakba” (the Catastrophe). In the late 1990s, graduate student Teddy Katz conducted research into a large-scale massacre that had allegedly occurred in the village of Tantura in 1948. His work later came under attack and his reputation was ruined, but 140 hours of audio testimonies remain.

​​History is full of controversial subjects that are necessary to discuss yet difficult to untangle. These backdrops provide the foundation for intriguing discussions that illuminate much about culture and politics, though the examination methods can be fraught with peril. The conflict between Israel and Palestine offers much commentary, and heated passions only intensify a complex accounting. Many storytellers have attempted to look back and find more evidence that gives context to these contentious times, and “Tantura” sets its gaze on seemingly forgotten events and brings them to light. The film showcases a powerful indictment on the consequences of war and the silence of those who wish to bury the true horrors that resulted.

As the state of Israel was being established in 1948, a war involving the Palestinian settlers of the land broke out to establish territorial control. Among the many excursions, one was the occupation of a village in the region of Tantura. Official history documents at this time are certainly combative but not outside standard wartime procedures. Others describe this incident as one containing much more violence and cruelty, resulting in executions after the land was taken and a mass grave that has gone unacknowledged. This documentary combs through the hard evidence and oral reminiscences of those who were present decades ago and seeks to reconcile the past with strained present times.

Director Alon Schwarz slowly builds upon the initial setup of information that first shows the modern perspectives being asked to reflect back on a tumultuous time. It is quite a feat being able to hear from individuals, many of whom are now nonagenarians, give critiques of a time and place that is not known to many people living today. This approach lays the groundwork for a compelling mystery to unfold through the cataloging of evidence, ultimately giving a more complex portrait. Admittedly, it is a rather tedious wind-up that Schwarz delivers that, while providing necessary information to establish the stakes, is not particularly engaging. The colliding perspectives and accounts are fascinating, if a bit messy, in execution and yearn for a more cohesive assembly.

However, there is a point in which the plot becomes more focused in the investigation, primarily on the path of Teddy Katz. Katz is an academic researcher whose published thesis on the alleged atrocities committed in Tantura was the subject of intense dispute. The film essentially takes his findings and uses it as an exploratory point for a larger discovery, interrogating the policies of the military who may have committed such heinous acts and the mentality of government forces that were keen to exert power while minimizing public outrage. The interviews collected range from retired soldiers, expert academics, and civilians who experienced such traumatic occasions. All paint a stark portrait of a brutality that is disturbingly juxtaposed against a more tranquil modern setting. It’s an effective form of storytelling that invests one into the layers of corruption and the motivations associated with such actions.

Another interesting dilemma that can occur in films relating to the subject of Israel and Palestine is what viewpoint is inherently baked into the analysis. Even for such a detailed and nuanced inquiry, it can be easy to fall blatantly on one side or another. It would be inaccurate to say the film does not have its own assertion of which party is telling the truth and which is deliberately trying to ignore or alter the perception of the past. At the same time, its presentation is still appreciated in the way people’s own divulgement is what colors the observations. There may be competing agendas shown, but it is amazing how these interviews do not feel manipulated in an effort to conform to a particular agenda. They all contribute to ideas of how judging the past comes with its own intentions, and how the world reacts depends on those who have the influence to set that narrative. This is an element seen in many societies, and it is engrossing to watch how ordinary people can illuminate so much about the complicated trauma surrounding them.

At first glance, “Tantura” indulges in familiar topics, and it can sometimes feel laborious in its exploration. Still, there is a captivating chronicle that finds one enthralled at what is uncovered through deceptively simple interviews. The film takes recollections that are mostly memories told from assorted backgrounds and creates a landscape of mystery worthy of being excised. In looking deeper, the outcome carries a somber realization that healing from past wounds cannot transpire when atonement and recognition have not yet occurred. This may feel like yet another tale that ponders this region’s ongoing conflicts, but its plain-speak oddly enough gives rise to a more alluring framework that’s worthy to be prodded further.

​"TANTURA"<b>THE GOOD -</b> A fascinating narrative that explores how people remember the history of a traumatic past. The storytelling engages with perspectives that illuminate a complex landscape of competing political motivations.<br><br> <b>THE BAD -</b> The initial setup is rather tedious and can lead to more laborious moments in a messy execution.​ <br><br> ​ <b>THE OSCAR PROSPECTS -</b> Best Documentary Feature​<br><br> ​ <b>​THE FINAL SCORE -</b> 7/10