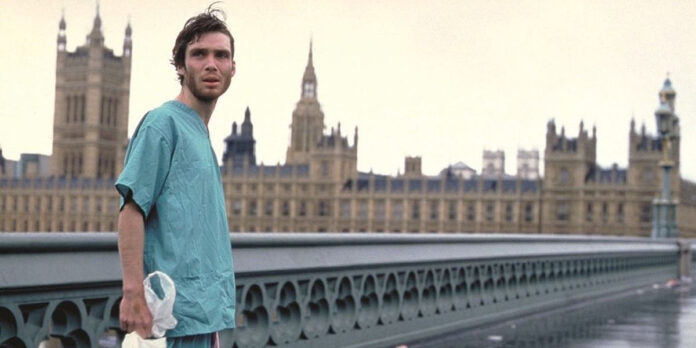 THE STORY – A group of misguided animal rights activists free a caged chimp infected with the “Rage” virus from a medical research lab. When London bike courier Jim (Cillian Murphy) wakes up from a coma a month after, he finds his city all but deserted. On the run from the zombie-like victims of the Rage, Jim stumbles upon a group of survivors, including Selena (Naomie Harris) and cab driver Frank (Brendan Gleeson), and joins them on a perilous journey to what he hopes will be safety.
​
THE CAST – Cillian Murphy, Naomie Harris, Christopher Eccleston, Megan Burns & Brendan Gleeson

​It’s a safe assumption that few filmmakers have had such a diverse and eclectic career as Danny Boyle. His filmography has ranged from hard-hitting adult dramas to whimsical family fare and nearly everything in between. His versatility as a storyteller is an element that keeps him fascinating and creates intrigue around any project he takes. Because of that, it’s also an intriguing concept to see his talents be utilized for the horror genre. For “28 Days Later,” it was an opportunity to once again look at a familiar premise and find creative ways to make it feel fresh and exciting. These results produced a resounding success, and a fantastic new entry into the pantheon of great horror films was created.

The film shows a world that has been ravaged by a deadly virus that has seemingly infected all human life in the UK. This disease makes its victims become consumed with rage and hunt down others with a vicious tenacity. Stuck in the middle of this is Jim (Cillian Murphy), a man who has just woken up in the hospital and is thrown right in the middle of the apocalypse. He soon crosses path with a group of survivors, which include the fearless Selena (Naomi Harris) and a devoted father-daughter team (Brendan Gleeson, Megan Burns). Their fight to endure this terror is fraught with peril all along the way as they soon discover that not all monsters are those infected with this disease.

What’s so striking about “28 Days Later” is how entirely committed it is to bringing a unique take on a subgenre that has been seen many times before. While the term “zombie” is never uttered once, the rules of contagion are quite similar. There’s the noted difference in the speed at which the infected move, and it conjures a much more visceral and frightening tone. It’s all helped by the grittiness of the filmmaking that heightens the more realistic terror as low-res digital cameras are used to capture the barren wastelands. It’s a great accomplishment that Boyle’s direction employs, and he utilizes the cinematography, engaging editing, and effective sound design to create a terrifying landscape that’s quite effective.

The success of the film isn’t only laid at Boyle’s feet. Alex Garland’s debut screenplay is one that not only understands how to craft tension within this horror-drama, but also manages to create endearing characters with a strong emotional connection throughout the story. It’s that particular element that gives the script its strength, along with a compelling social commentary on what happens when society allows rage to overtake us. Political connotations have been present in these types of films from the very beginning, and while the messaging here is far from subtle, it still provides another layer in which this story finds ways to pull an audience in. It does run into some issues in the third act when the world opens up to include more characters and the intimate character studies start to dissipate. Fortunately, it’s not too taxing, and the filmmaking does a lot to compensate for this deficiency.

There’s also an incredible ensemble of actors that do tremendously well at providing a great impact through their performances. Murphy grounds the film as the lead and manages to be charming, fearful, and deadly in the exact moments he needs to be. He’s quite captivating here, as is Harris going full badass while also harboring the tenderness necessary to convey the strong bond between her and the other characters. Gleeson and Burns have wonderful chemistry together, and the former is particularly effective as a loving father that pays off in an incredibly heartbreaking scene. A host of soldiers that show up at the end are mostly one-note, save for Christopher Eccleston as their leader. He brings warmth trapped by an insidious nature that makes him an unsettling presence, and he delivers it quite well.

One can certainly point to some quibbles with this film, and mostly they come in the third act when the momentum starts to wane. At the same time, it doesn’t hurt things that much overall, and “28 Days Later” is still a well-executed horror film that features great performances and incredible filmmaking. It’s an exercise that breathes new life into familiar tropes and offers a wildly inventive perspective that’s quite invigorating. The persistent energy makes this an enjoyable ride, particularly from a filmmaker such as Boyle who has such a diverse lineup. It’s a very strong achievement that, at least in my opinion, is the best film he’s made to date.