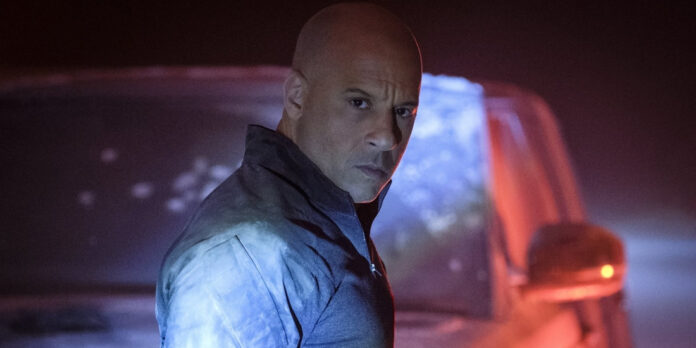 THE STORY – After he and his wife are murdered, marine Ray Garrison is resurrected by a team of scientists. Enhanced with nanotechnology, he becomes a superhuman, biotech killing machine – Bloodshot. As Ray first trains with fellow super-soldiers, he cannot recall anything from his former life. But when his memories flood back and he remembers the man that killed both him and his wife, he breaks out of the facility to get revenge, only to discover that there’s more to the conspiracy than he thought.
​
THE CAST – Vin Diesel, Eiza González, Sam Heughan, Toby Kebbell & Guy Pearce

​​​​​Remember back when comic book movies were consistently awful? Remember when Vin Diesel kept trying to kick-start another franchise to match the same level of success as “The Fast and the Furious?” Oh wait a minute, at age 52 he’s still trying to do that. Instead of trying something new, “Bloodshot” feels like it is copying an outdated formula for both its star and the genre in which it is set. The result is an empty sci-fi action film with a laughable screenplay and a tired star who could sleepwalk his way through this role (which he pretty much does). Not even the action scenes or sci-fi elements utilizing nano-tech could give this comic book adaptation the shot in the arm it needed to impress a 2020 audience, who are hungry for something more than what “Bloodshot” provides.

Ray Garrison (Vin Diesel) is a military soldier who, due to the fallout of a previous mission he conducted in Kenya, is murdered alongside his wife by a white winter coat, sandals, and socks wearing psychopath named Martin Axe (Tobey Kebbel) – we know he’s a psychopath because he makes his entrance to the song “Psycho Killer” by Talking Heads, just so you know. He’s brought back to life by a team of scientists at RST (Rising Spirit Technologies), led by Dr. Emil Harting (Guy Pearce) who provide Ray with nanotechnology called “nanites” which grant him super strength and the ability to quickly repair his tissue when undertaking heavy damage from his enemies. Fueled by rage, Ray is intensely motivated to find the man who killed his wife until he realizes that there is a greater conspiracy going on.

Vin Diesel is once again typecast as the stone-cold brute who is reckless and relentless. He’s a good soldier, provided he has the right motivation to kill. The film tries to call into question elements of what makes a good solider? How they’re put into boxes, in a system that is unfair and built around control, robbing them of their free will and ability to choose a life for themselves. However, watching Vin Diesel try to dramatically act his way through these aspects of the script is laughable at best, when a few scenes prior you have him ripping off his military jacket just so he can show off his typical white tank top in slow-motion set across the backdrop of beautiful magic hour sunlight. You can go from cheesy to serious in many cinematic situations but not when your lead actor is someone with the star power and limited acting capability that Vin Diesel possesses. The film even tries to retroactively correct all of its cliche storytelling decisions and awful lines of dialogue by suggesting that all of it is by design on the screenwriter’s part. Which would be fine…if the film didn’t end with yet another gorgeous sunset at magic hour, filled with plot holes and other cringe-inducing lines of dialogue. Like its leading man, it’s trying to be “cool” when it’s anything but.

There are some elements that I’m sure people will find enjoyable though with “Bloodshot.” I personally didn’t care for the action scenes, as I felt they were unclear in how they were shot and rapidly edited but I’m sure there are those who will not be bothered by them the same way that I was. The same can be said for the visual effects, especially during a climatic elevator sequence where Ray Garrison is fighting off two nano-tech infused warriors like him who are trying to put him down. There are unnatural movements in the visual effects which don’t exactly scream “realism.” Unsurprisingly, a scene that takes place in a dark and hazy tunnel that predominantly features slow-motion may be the best scene in the entire film for we can actually make out what is happening and enjoy the bare essentials of what this film is trying to offer.

I really wanted to enjoy “Bloodshot” as I felt the story to be an interesting one on paper and I was looking forward to a comic-book offering that wasn’t DC or Marvel. Credit to Lamorne Morris, who does give this film a necessary shot in the arm in the third act as Wilfred Wigans, a comic relief character who does get a few funny one-liners but feels more like a plot device to help our character get out of a few tight corners in the screenplay. As a concept, “Bloodshot” that feels dated but could’ve been updated for a modern audience with something interesting to actually say but instead digresses to its 90’s action blockbuster roots where the substance was minimal, there was a lot of blood but by the end, it left you feeling shot.