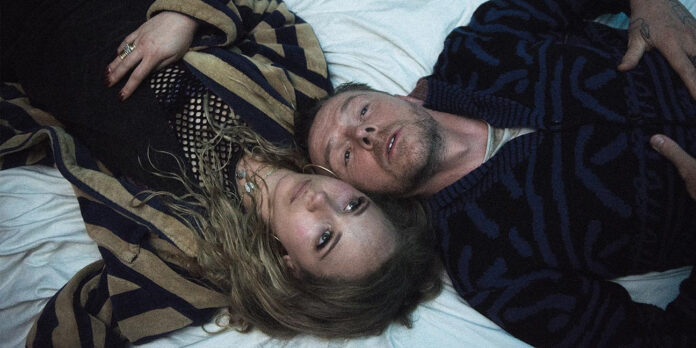 THE STORY – Hannah (Juno Temple) is a shy songwriter and discovers that her friend, respected record producer Theo Ross (Simon Pegg) has lapsed on his medication for schizophrenia and she begins desperately trying to get him the help he needs.

​​When we hear the name “Simon Pegg,” the first thing that probably springs to mind is “comedy” as he’s known for films such as “Shaun of the Dead” and “Hot Fuzz”. He brings a comedic touch to the “Mission: Impossible” films as well as delivering a fairly decent Scottish accent in the “Star Trek” franchise. Those from the U.K. and of a certain age will also recall his role in the cult sitcom “Spaced”. So, to hear that Pegg is playing a more serious dramatic role in Katharine O’Brien’s latest film, “Lost Transmissions,” was a bit of a shock to the senses. Could someone like Pegg really pull it off? Will viewers be able to disassociate him from comedy and accept him in such a dramatically different type of film? Well, it’s safe to say that this is Pegg’s finest performance to date and he proves himself to be more than capable of taking on such a role.

“Lost Transmissions,” tells the tale of an unlikely friendship between Juno Temple’s Hannah, a young singer struggling with depression, and Pegg’s Theo, a record producer who when we first meet him seems to be completely free-spirited and a creative genius who sees Hannah’s true potential. “Don’t just sing the words – feel it!” he tells her during a recording session. He seems to understand her and wants to nurture her creativity. And when she confides about her depression and the medication she takes for it, he tries to tell her that she’s better off not taking them. (“They’re holding you back.”)

However, just as their friendship and their creative partnership are beginning to take off, Theo suddenly changes. He becomes distant, forgetful, and starts talking about secret messages transmitted through radio static. Quickly, we learn that he’s schizophrenic, and when he goes off his medication, his paranoia takes over. His condition worsens and he begins alienating his colleagues. Only Hannah sticks by him, determined to keep him from throwing away his career, and more importantly, his life away. “Do I scare you?” Theo asks, only for Hannah to reassure him that he doesn’t: “I’m scared for you.”

A game of chase begins as Hannah does her best to keep track of his whereabouts and tries to get him into treatment, coming face-to-face with the frustrating inadequacies of America’s health care system. At the same time, her own career is beginning to take off as she begins writing songs for Dana Lee (a charmingly sarcastic and witty Alexandra Daddario), a pop star in need of a new hit. At the same time, her depression starts to edge its way back into her life.

On paper, “Lost Transmissions” sounds like your run-of-the-mill conventional indie drama about mental illness – think something along the lines of “It’s Kind of a Funny Story” or “Silver Linings Playbook” – but O’Brien brings so much humanity and realism to this film that it doesn’t feel prepackaged or fake. The film may be set in Los Angeles, but this is a side to the Hollywood music scene that we rarely see. Theo and Hannah are just two lost individuals struggling to cope as a cog in a much larger machine. The topic of mental illness here isn’t approached in a grand, over the top fashion, there aren’t any scenes which try to intimate classics such as “One Flew Over the Cuckoo’s Nest,” and everything plays out realistically. We’re fully invested in this world, and O’Brien’s film is very much grounded in reality.

We get the sense that O’Brien is really interested in observing the current standard of health care in America by showing us a very real and everyday scenario. The film is inspired by true events, and O’Brien found herself in a similar situation with a group of friends trying to help a friend who had gone off their medication. Hannah is very much out of her depth, but she’s determined to help Theo in any way possible. It’s refreshing to see a film focused on a friendship between a male and a female that doesn’t end up with the two of them having a sexual relationship. Their friendship has this bittersweet tragic element as we know that both bring out the best of each other, but they’re both struggling with their inner demons which have a way of consuming them both.

While the film may be confusing to follow at times, with its surreal fluidity and dream approach to telling the narrative, many aspects deserve praise. Hugo Nicolson’s score and Arnau Valls Colomer are also worth mentioning as both the music and the camerawork help to bring the viewer into this raw gritty world of the L.A. music scene. Not only does Pegg deliver a strong performance, but Temple is truly a whirlwind force here. She presents us with a character that’s both strong-willed but vulnerable at the same time, and to those who have struggled with depression in the past, her story will certainly hit close to home. And in the very brief scenes that she’s in, Daddario is an absolute delight to watch.

However, “Lost Transmissions” really is Pegg’s film. He dominates every scene he’s in, not in a commanding or forceful way, but by his sheer magnetism and energy. We feel for his character, as we watch his struggle to connect with others, and fear to allow others to get close. When he breaks down, we can’t help but cry along with him. Simply put, Pegg is a tour de force here. This is Simon Pegg like you’ve never seen him before, and let’s hope we witness him take on another role like this one.