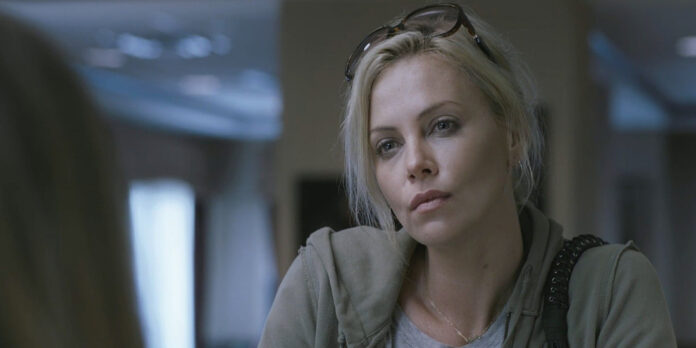 THE STORY – Mavis Gary (Charlize Theron) is a successful writer of teen literature who returns to her hometown with a dual mission: to relive her glory days and steal away her now-married high-school sweetheart (Patrick Wilson). However, her mission does not go exactly to plan, and she finds her homecoming more problematic than she expected. Instead, Mavis forms an unusual bond with a former classmate (Patton Oswalt), who has also found it difficult to move past high school.
​
THE CAST – Charlize Theron, Patton Oswalt, Patrick Wilson & Elizabeth Reaser

​Witnessing the relationship between Jason Reitman and Diablo Cody has been an interesting journey that has unfolded throughout the years. There is an undeniable attraction that these two have in a creative sense, diving head first into stories about complicated individuals seeking to find some way back to a sense of normalcy, or as close as they seem to come to it. The success of “Juno” was cataclysmic, helping each of them propel further onto a platform of greater success. Their return in 2011 was much anticipated, and while overall the results are not as prolific as their previous encounter, there is still plenty in “Young Adult” that offers much to appreciate.

“Young Adult,” tells the story of Mavis Gary (Charlize Theron), the ghostwriter of a popular series of young adult novels that have seen better days and is shuffling off to its finale. Living in Minneapolis, Mavis’s life is disorganized and cluttered, having just recently gotten divorced and in the throes of alcoholism. This is all disrupted when she receives an email announcing the birth of a child, that of her high school boyfriend Buddy Slade (Patrick Wilson). Anxious to recapture a missed opportunity, she returns to her small town with the intention of winning back her old beau and convincing him to leave his wife and newborn. While back, she also gets in contact with Matt (Patton Oswalt), another former classmate who’s been left disabled after a hate crime and attempts to be the voice of reason in Mavis’s crazy plan.

It seems fitting to revisit this film in an age in which nostalgia has overtaken many corners of our current pop culture landscape because that is at the heart of the tale Cody and Reitman spin here. Mavis’s quest to reclaim a love she had long ago is not merely an empty trip down memory lane of a former prom queen trying to capture her former glory. There’s no denying the ultimate sadness and self-destruction that Mavis is enduring, and Cody’s script brings these themes to light with a playful yet meaningful perspective. After so much praise and criticism were levied against her original, if slightly too precious dialogue in Juno, in “Young Adult” she creates more substantial ground in character work. I’m not convinced she entirely sticks the landing relating to the growth of her characters, which is undoubtedly the most frustrating part of the film’s trajectory but watching them take this road was quite something to behold.

Reitman’s collaborations with Cody are the only instances in his career in which his position is solely that of a director. The trust he has in the screenplay gives a true test of his skills in that department. As such, I would argue that his direction is the weakest part of the film. There is an especially odd sense of pacing throughout, most prominently in the beginning, and while I credit Reitman for his ability to coach his actors to give endearing performances, it never rises to any level of distinction. This is particularly noticeable when his brief flashes of flamboyancy just feel out of place. However, I will credit Reitman for capturing a particular feel of the Midwest. As someone who grew up in similar areas, there was an inviting sense that never felt condescending and always seemed genuine and authentic.

I don’t think there’s any doubt here that the “best in show” award belongs to Charlize Theron. The entire strength of the film rests on her shoulders. It’s quite amazing to see the complicated act that Mavis has to embody, being thoroughly disagreeable while also understandable in what the true nature of her journey is meant to serve. Every moment with Theron feels real and captivating, and it’s an utter shame that the Academy didn’t recognize her work that year, particularly when I would argue that nominees such as Michelle Williams for “My Week with Marilyn” and Glenn Close for “Albert Nobbs” have not stood the test of time. Theron is brilliant in every scene and elevates the material with her sharp comic timing and devastating breakdowns (Especially towards the end of the film at the baby’s naming ceremony).

The supporting cast is also solid, though nowhere near as forceful as the central performance. Oswalt was the recipient of much Oscar buzz around the time, and while he’s quite good, it never feels like he delivers anything more than a variation on himself. He sells the damaged character well, another extension of people refusing to cast aside their nostalgic trauma, but it’s difficult to see anything beyond Oswalt being serviceable. Wilson gives a solid turn, but the passiveness of his character makes him feel more metaphorical and therefore limits our emotional attachment, especially given that his cluelessness about Mavis’s true intentions feels a bit contrived. Elizabeth Reaser as Buddy’s wife is also fine, but her character is not present enough to make that much of an impression.

The second outing between Reitman and Cody after their crowd-pleasing and Oscar-winning “Juno,” may not have set the world on fire as much as their previous effort did but it still manages to find some interesting emotional depth to showcase. The strengths of their efforts are a showcase of solid performances as well as an intriguing commentary about how difficult it is to let go of the ghosts of our pasts and their ability to haunt us in more ways than one. Despite that messaging getting a bit muddled at the end, a large amount of credit is still due, particularly at the feet of Theron’s great performance. After this collaboration, we cannot wait to see where Cody, Reitman and Theron go next with “Tully.”