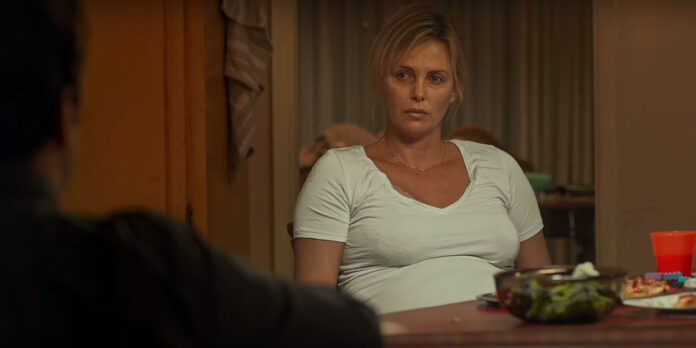 THE STORY – Marlo, a mother of three, is gifted a night nanny by her brother. Hesitant to the extravagance at first, Marlo comes to form a unique bond with the thoughtful, surprising, and sometimes challenging young nanny named Tully.

​​If you ask, many mothers will probably say that being a mother is the best and most fulfilling thing a person can do in their life. Cinema and other forms of media have glamorized this experience leading many to believe the same. However, as told by Academy Award-winning screenwriter Diablo Cody, it’s not all sunshine and rainbows. The dutiful responsibility of being a mother 24/7 can actually be extremely tiring, frustrating and at times, dare I say, regretful. “Tully” dares to show us the other side of this otherwise wonderful experience with honesty and quirky humor with all of its ups and downs. It’s a cautionary fairytale of sorts to those who are possibly thinking about becoming a mother and crushing our expectations by showcasing painstakingly reality at its most humorous and tragic.

Marlo (Charlize Theron) is a mother to two kids, living a domesticated homelife in the suburbs with her loving but work busy husband Drew (Ron Livingston). Having to take care of her two needy children already (Her son Jonah occasionally has emotional breakdowns leading to frustrations at his school), Marlo has yet another newborn baby girl. Already tired and worn down, Marlo has to once again lose sleep in the middle of the night, breastfeeding her newborn, calming her while she cries, all the while struggling to maintain normalcy with her husband and two kids. She has lost her appearance, her identity and her appreciation for being a mother. When Marlo’s wealthy brother (Mark Duplass) realizes the state she is in, he recommends a night nanny to come to her home at night and help her with the baby so she can get some rest. The night nanny is Tully (Mackenzie Davis), a young, idealistic and inviting presence so full of life and compassion that she reminds Marlo of who she once was before she decided to become a mother, leading to the two of them to bond while Marlo gets the break she so desperately needs.

After previously teaming up on 2011’s “Young Adult,” director Jason Reitman, writer Diablo Cody and star Charlize Theron are back with “Tully.” Every aspect of this film is operating on a higher level than their 2011 film. The writing is more thoughtful, engaging and filled with a few very unexpected turns. Diablo Cody’s empathy, themes and balance are better than ever, merging the darkness of “Young Adult” with the lighter humanistic moments of “Juno.” It’s a daring screenplay that pulls no punches and helps its audience to have empathy for its central character and by extension, hopefully, a newfound appreciation for mothers everywhere. The directing by Jason Reitman is more visually inventive, as he showcases the look of the film in tones of orange and pink, exuberating a warm and nurturing feeling throughout. His sequences exhibit more control and there is one particular montage showcasing Charlize Theron taking care of her newborn baby that will have you laughing one moment and squirming the next.

And what else can be said about Charlize Theron that has not already been said? She once again proves that she is one of the most diverse and brilliant actors of her generation as she turns in another fearless character study that ranks at the top with the very best work of her career. Exhausted, frustrated and barely showing a spark of her former self before her three pregnancies, it’s not until she meets Tully that we see the full range of her performance and the contrast of Marlo at her best and at her worst. As for Tully herself, Mackenzie Davis has a very difficult role to play here that hits all the right notes and gracefully lends itself to Theron’s masterful performance. She does exactly what the script calls for her to do early on and it’s not until the third act that the full scope of her performance comes into play. Same goes for Ron Livingston who is more of a background character by design throughout “Tully,” until one speech at the end of the film brings him more into focus, showcasing the support that his wife has needed from him so desperately all along.

I have a tremendous amount of admiration for “Tully” but I do have one major gripe with it. Without going into spoilers, there is a moment in the third act, whereupon reflection I found it to be quite moving and powerful. However, at the moment, I was confused by what Cody and Reitman were trying to convey to the audience. I knew something was going on but I couldn’t quite piece it together at first. Some may feel the same way, while others will not. Some will find it to be cheap and unearned. If anything, it made me want to go back and re-watch the film after it was over, which I find morbidly fantastic for there are times where “Tully” is not an easy watch due to how heartbreakingly authentic it is. However, it gives us the chance to appreciate Diablo Cody’s themes and message again, this time hopefully with more perspective (You’ll want to talk to your friends about this one. Trust me). It gives us the chance to appreciate that Jason Reitman has finally gotten his groove back, after a few missteps in his filmography (Remember “Labor Day?”). And it gives us a chance to relish in Charlize Theron’s performance. An imperfect, exasperated, struggling and yet deeply sympathetic mother of three, who is doing the hardest work of her life. It’s beautiful, rewarding and left open to debate, just as the best films should be.