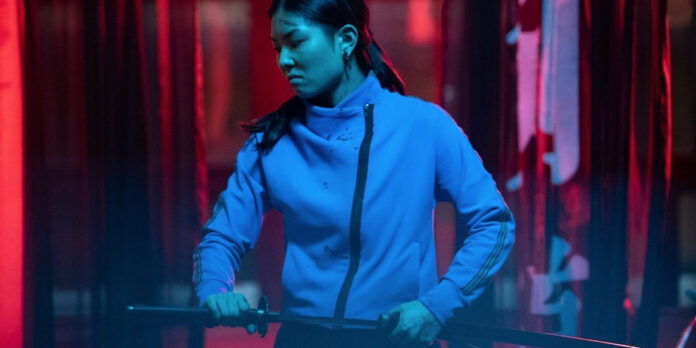 THE STORY – The heiress to half of the Yakuza crime syndicate forges an uneasy alliance with an amnesiac stranger who believes an ancient sword binds their two fates. She must unleash war against the other half of the syndicate who wants her dead.

At its core, one hopes for certain things that an action film can provide. There’s hope for an engaging story with intriguing characters to follow, but frequently that feels secondary to the more critical elements regarding spectacle and entertainment. Having both is undoubtedly beneficial, but ensuring that the set pieces maintain a certain energy level to be enthralling is of most importance. Much can be forgiven on the story’s construction if proper investments are made in the presentation of the film’s style. Only a handful of these films ever reach a level of extraordinary capability, as most fall into the chasm of mediocrity. Sadly, “Yakuza Princess” does not even achieve such modest heights as a poorly executed piece with an oppressive aura of banality.

The film centers its tale around Akemi (Masumi), an orphan living in the heavily populated Japanese section of São Paulo, Brazil. Her relatively everyday existence is interrupted by numerous assassins on her trail for reasons initially unknown to her. She eventually crosses paths with a mysterious stranger (Jonathan Rhys Meyers), stricken with amnesia and covered with scars from a recent fight. Akemi soon discovers she is the heir to a powerful Yakuza syndicate and was the sole survivor of a massacre that killed her entire family. With an uneasy alliance now forged with the strange man, Akemi looks to uncover the darker secrets of her past and emerge victorious from the bloody war that has been started.

It does seem apparent that director Vincente Amorim has ambitions to craft a compelling piece of action cinema, especially with the application of dynamic neon lighting that seems purposeful in evoking previous types of stories with this look. However, the aesthetics come across as cheap and unsightly, and the colorful shades do not mask the inexpensive level of quality. The filmmaking cannot manage to elevate the material, even though the occasional dramatic flair is effective. Those moments are too few and far between, as the lethargic pace constantly stalls the momentum. There is some decent stunt work on display as well, but the sloppy editing hardly gives one an occasion to appreciate it.

For as lacking as the direction may be, it does not compare to the extremely low merits of the screenplay. Co-written by Amorim and a host of others, the narrative is marred by a plot that is not captivating in the slightest and a vast array of poorly developed characters. It is often difficult to track the specific motivations of the players in this game, which leads to a frustration in connecting to the storytelling. This is only compounded with so much of the screenplay seeming to spin its wheels and pad things out without any notion of excitement. Nearly every line of dialogue embodies a stale cliché that only emphasizes its remarkable shallowness. At almost two hours, there is very little in this foundation that justifies one maintaining interest throughout the film. It’s an apathetic piece of writing that does not engage its performers nor complement the strengths of the crafts.

Such apathy is extended to most of the actors as well, unfortunately. Masumi handles the choreography well enough, but her deliveries are pretty wooden and unmoving, though the material does her no favors. Even with fleeting moments of impressive emotions shown, she struggles to create a more alluring portrait of a mysterious heroine. Meyers inhabits a quiet stoicism that seems to work initially but then gives way to seeming performative and inauthentic. Granted, there is absolutely nothing to this role that makes him a more interesting character beneath the surface, and his personality is entirely one-note. Still, what’s represented in his performance is a charmless, brooding husk that fails to become exciting to watch. There’s a scattering of serviceable supporting players, including Tsuyoshi Ihara, playing a gangster with his own complicated history, but the inadequate prose also lessens his impression.

It’s easy to see the type of film “Yakuza Princess” aims to become. The approach is amateurish, but with enough flamboyance, one can become enamored by the provocative choices. It’s a shame that so many of those choices here utterly fail to produce a fascinating framework. With such inert propulsion, unattractive designs, and terribly conceived dialogue, the weight of the film’s deficiencies crushes any precious few positives. The cast itself barely registers an impact, and the entire piece is bloated and dull. There is space to creatively exploit this genre in a manner that forces great cinema. However, this is far from what the genre can offer, even on a passable threshold.