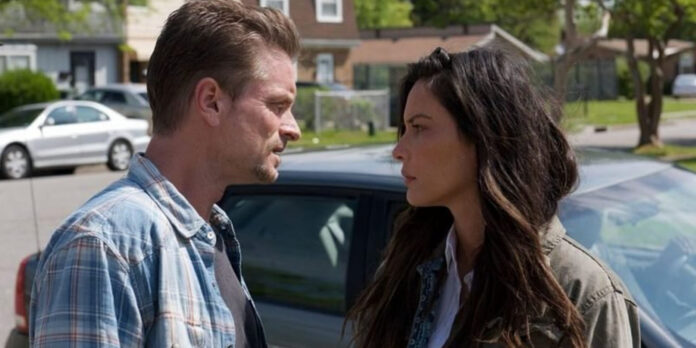 THE STORY – A down-on-his-luck social worker finds himself in over his head when he tries to protect a client from her recently paroled husband — a maniacal drug dealer out to reclaim his priceless stash.

​​​When a movie is described as a “hold on to the edge of your seat” crime thriller, you hope for several basic things. You want that movie to be suspenseful and thrilling, and maybe it even throws in a few curve balls to really satisfy or even exceed your expectations. And when there’s a pretty stacked cast involved, you can only hope for an even better product. Unfortunately, “The Gateway” misses the mark on all of those things.

Parker (Shea Whigham) is a social worker who has seen and experienced it all. It’s not uncommon for him to walk into a home and see a child left alone while their parents are under the influence of drugs, or worse, dead. His own upbringing wasn’t a happy time, and to this day, there’s tension between him and his biological father (Bruce Dern). Parker is no saint himself, though — time and time again, we see him drink, do drugs and get himself into questionable situations.

But because of his upbringing, he has so much compassion and empathy for his clients that is so rare in his office. It’s no wonder why he gravitates toward Dahlia (Olivia Munn), a single mother who has a lot on her plate and can’t always be the perfect parent to her daughter Ashley (Taegan Burns). Parker offers to drive her daughter to school while also being stern with Dahlia that she needs to put her child’s needs first.

When Ashley’s husband Mike (Zach Avery) returns from prison, promising that he won’t go back to a life of crime, all signs lead to that not being the case. As he goes back to his old crew and tries to reclaim a drug stash, Parker gets even more involved in Dahlia and Ashley’s lives as he tries to protect them from Mike and his business.

It’s better to rip the Band-Aid off right away: A lot doesn’t work with this movie. It’s described as a crime thriller, but it lacks on the thrilling part. The story is pretty simple and doesn’t do a whole lot to hook viewers in. As you watch events unfold in this movie in a paint-by-the-numbers way, you might find yourself saying, “OK, sure, why not,” to every moment. For example, two men break into Parker’s car early in the film and steal his radio. Later on, he somehow finds them at a gas station, snorts cocaine, holds them at gunpoint, and takes their money. Huh? And a furniture store somehow has an underground drug and sex business going on. I guess so!

One of the most significant flaws with the movie is how rushed it feels. At a quick 91 minutes, the story moves right along with very few hiccups in how things should play out in these people’s day-to-day lives, and if there are any hiccups, they get resolved just like that. During the third act, when the action is supposed to be at its highest, again, everything goes by within minutes, which ultimately takes away any interest you might have in seeing how things play out. In the final moments, when Parker and Mike go head-to-head, this climactic scene is about five minutes long. It’s almost as if getting from scene to scene is a race. The editing is also so amateurish that it makes moments in these five minutes look even worse. The cuts are so abrupt, and the action looks so corny. And the writing definitely needed some work. “I want my dope, and I want my daughter” is an actual line.

There’s a star-studded cast in “The Gateway,” but their characters are cliche, and these actors’ talent is wasted. Whigham and Munn do the best they can in their roles, although there’s not a whole lot there, especially Munn’s character, who is roped into bad situations because of her husband. As the drug crew leader, Frank Grillo, and Taryn Manning, as a woman who hangs out at the bar that Parker frequents, are completely underutilized. The only actor who can claim to have a bit of fun is Dern, who, at 85, gets to fire a shotgun at trespassers ferociously.

“The Gateway” suffers from a poorly written script that doesn’t bother to throw any curveballs or shockers for the audience. Everything is how you would expect it to be, and even when there’s action, it’s not at all thrilling. The film also moves way too quickly, making it hard to connect to, or really care about, anything that’s going on. Though there’s a great group of actors in this film, they are not used to their fullest potential, and it makes you wonder why they even bothered with this project.