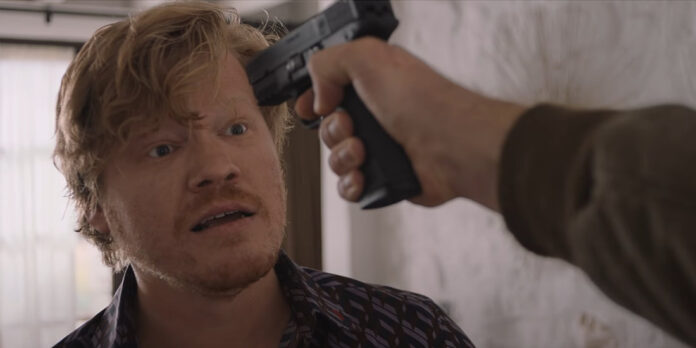 THE STORY – A man breaks into a tech billionaire’s empty vacation home, but things go sideways when the arrogant mogul and his wife arrive for a last-minute getaway.

I’m going to come right out and say it; all of the thrills in Charlie McDowell’s new thriller, “Windfall,” happen in the last twenty-five minutes. The screenplay by Andrew Kevin Walker (“Se7en”) and Justin Lader (“The Discovery“) takes its time in the first hour of the film, during which very little happens, before an explosive ending that makes the journey almost feel worth it. Jason Segal and Lily Collins do their best to bring life to the movie, but it’s only genuinely saved by a magnetic turn from Jesse Plemons.

The film starts with a shot of a gorgeous vacation house and an overly-dramatic suspenseful score (courtesy of Danny Bensi and Saunder Jurriaans) before we see a man (Segal) arrive at the house and begin to rob it. However, before he can finish, the wealthy couple who own it (Plemons and Collins) return. While the robber tries to avoid being spotted by the couple, there are early hints of the tension in their relationship. The film wastes no time in having the three characters meet and squashing the bit of tension that was building. The couple tries to bargain with the intruder, offering him money in exchange for not harming them and leaving. He barricades them in their outdoor sauna (yes, very bougie) and leaves but is spooked when he catches sight of a security camera and returns inside the house. Eventually, the husband settles on getting someone to bring him a large amount of cash in return for the man leaving once he has it. It won’t arrive until the next day, which means that the three are stuck with each other as they wait. Throughout the film’s middle section, we learn more about the couple, like the man’s condescending attitude and the woman’s passion for her philanthropy work. None of the characters are ever referred to by name, but it’s less confusing when watching the film than it is when reading about it.

“Windfall” is clearly trying to make some statements about wealth and classism. The husband is a CEO who is worth billions of dollars, and he met his wife while she was working as an assistant. His elitism is clear from how he treats everyone he interacts with, from his wife to the burglar, and at times rather heavy-handed, like his rant about freeloaders. The writers did find some more subtle ways to show their out-of-touch affluent lifestyle, like their lack of knowledge about their vacation home as they have others who deal with it for them. Still, much of the commentary is too on the nose to be effective and never truly amounts to anything profound that we haven’t heard before.

The first two-thirds are the film is slowly paced and lacks any real sense of danger. The dealings between the couple and the burglar are comically polite but never funny enough to be entertaining nor demented enough to reach the heights of something like Michael Haneke’s “Funny Games.” However, the last twenty-five minutes of the film feel like they’re out of an entirely different movie as everything goes off the rails and the film starts to reach those levels. The tension becomes increasingly high, and it’s hard to predict what might happen next; if more of the film had captured that high sense of unpredictability throughout, it would have been a much more engaging watch.

While both Seagal and Collins give decent performances, Plemons is the real star as the terrible, wealthy CEO who will say and do just about anything to get out of the situation he’s in. It’s a role that he embodies with relish, giving the audience the funniest and most eyebrow-raising moments of the film. While there’s undoubtedly a good idea at the heart of “Windfall” – a billionaire so used to getting his way that he even tries to negotiate with a burglar – it, unfortunately, results in a film void of any thrills until its last third. But by then, I’m afraid most audiences will have already tuned out.