“WE’RE ALL GOING TO THE WORLD’S FAIR” 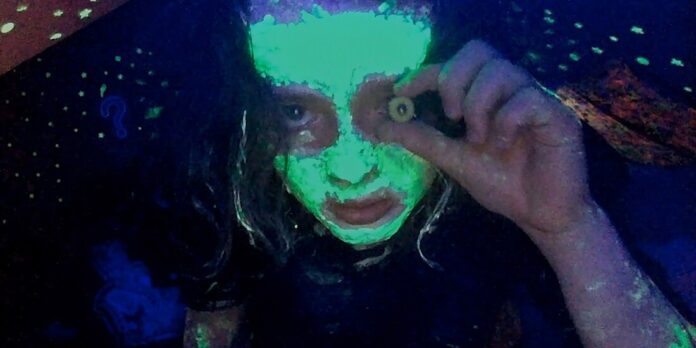 THE STORY – Reality and fantasy begin to blur when a teen immerses herself in a role-playing horror game online.

​​​​It wasn’t long ago when we were all sending and receiving crazy chain messages telling us that if we didn’t pass along the email to another ten people, a killer would visit us in the middle of the night, or we’d have bad luck for the next seven years. Those emails later turned into wild internet challenges that have made us laugh – such as seeing people cough up powdered cinnamon – and cringe – who could forget the Tide pod challenge.

Jane Schoenbrun’s feature directorial debut “We’re All Going to the World’s Fair” tackles the insane internet culture that we’ve all come to know and hate for the most part. But instead of focusing on the fun challenges that are swirling around, Schoenbrun dives into the dangerous and toxic parts of the internet and how it can impact younger users searching for a community. While the film’s premise seems interesting, and its lead performance from a first-time actress is solid, the execution lacks in many ways.

Casey (Anna Cobb), through a vlog, takes us through the very simple and strange steps of the World’s Fair challenge: she repeats “I want to go to the World’s Fair” three times, pricks her finger and shows us the blood and then watches a video full of strobe lights. That’s all it takes to go to the World’s Fair, and she adds that she’ll update viewers if she starts to notice any changes. In the meantime, she spends her lonely days watching other challengers document their progress. One man feels Tetris is being played on his body, while a woman claims she’s turning into plastic. While these videos would likely make most people think the challenge is a total sham, Casey can’t get enough of them. The internet is a place of refuge for this young woman who appears to have a problematic relationship with her father (who we occasionally hear but never see) and spends most of her time alone in her room. Seeing this reality displayed in this film reminds us that young, isolated minds can easily be corrupted by the things they see on social media, especially the more negative ones.

As the days go by, Casey continues making strange videos, and Cobb, in her feature film debut, does a fantastic job portraying this young woman who seems like she’s losing her mind in her vlogs. Casey soon receives a very cryptic message that says, “YOU ARE IN TROUBLE. I NEED TO TALK TO YOU.” and meets “JLB” (Michael J. Rogers), a World’s Fair obsessive who also spends his days watching videos of people’s updates. Hiding behind a cartoon avatar on Zoom calls, he shares the information he’s gathered about this challenge and asks that Casey keep uploading videos so he can make sure she’s OK. Schoenbrun then decides to dive into JLB’s life for a portion of the film, showing us another isolated person. To put it simply, everything about JLB and how he presents himself to Casey is creepy, and it’s another reminder that stranger danger is very real online (although I’m sure most Twitter users have thrown all of their vigilantism out of the window by now).

Even as “We’re All Going to the World’s Fair” does a solid job tackling the always relevant topics surrounding internet culture, the film itself is quite a bore. As we see the videos Casey uploads or watch other people who have done the challenge, very little happens that keeps us on our toes. Casey has some moments that will make audiences question if she’s actually experiencing changes or not, but these scenes are so drawn out and tame that they’re not particularly interesting. It’s also not entertaining to watch her leave the frame for some time and look at her room or watch her sleep and wait for something to happen. JLB’s story also doesn’t provide anything compelling.

“We’re All Going to the World’s Fair” is a very muted movie, which usually isn’t bad, but it provides very little to hook audiences. While it tackles internet culture quite well, it’s not enough to keep your attention. Don’t expect this movie, or the World’s Fair challenge, to go viral anytime soon.