“WE NEED TO DO SOMETHING” 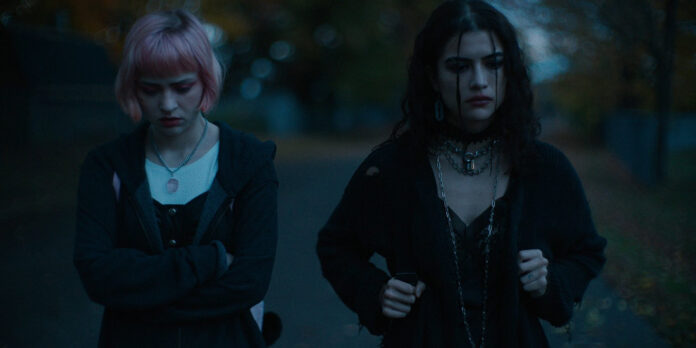 There’s much that can be gleaned when one finds themselves in close quarters with other people for an extended amount of time. It’s an opportunity to discover some revealing truths concerning all parties involved and can be the basis for compelling drama. The answers may not always be appealing, but stripping away the physical barriers and forcing people to maintain constant, uninterrupted interaction is a recipe for some intriguing dynamics. This sort of premise can also be the foundation for provocative thrillers and horror films, and that’s precisely what “We Need to Do Something” aims to achieve. Its results are not always cohesive, but what’s presented is a mostly engaging story propelled by a strong ensemble.

At the film’s start, a powerful storm is brewing in the neighborhood, and Melissa (Sierra McCormick) and her family seek refuge in the bathroom to wait it out. However, their situation becomes direr when debris crashes into their home and blocks the door, trapping all of them inside. Even as the storm passes, the family cannot escape their surroundings. The bickering between the parents (Pat Healy, Vinessa Shaw) only intensifies, and Melissa’s brother (John James Cornin) tries his best to stay calm amidst the chaos. Yet, there’s another secret that tears Melissa up inside. She is deathly afraid that a cursed spell performed by her girlfriend has caused all these events. As the hours turn to days, the family sinks further into dysfunction and eventually recognizes the more sinister elements that threaten the safety of not only this family but the world itself.

There’s a slow build implemented in the film’s pacing that sees its modest stakes slowly rise over the progression of this horrific moment in time. Director Sean King O’Grady manages to craft an effective atmosphere of tension that indulges in successful sequences of terror and dread. The claustrophobic viewpoint maintained throughout does have its pros and cons, though. While keeping the scope contained makes the central conflicts more heightened for these characters, it does make one yearn for exposing a more extensive narrative around them. As such, the film can occasionally fall into ruts where the momentum can stall. There’s also a handful of flashbacks that, perhaps in an attempt to emulate the main story’s cramped nature, are shot with extremely shallow depth of field that isn’t the most pleasing of aesthetics. Still, there are several occasions where the creepiness is well-executed, and the tone is captivating.

Adapting his own novella, Max Booth III’s screenplay has a keen focus on establishing the connections between these family members and how their trust starts to erode. The backstories are not particularly complex, and truthfully, it’s the performances that add more layers of nuance than the writing. In tandem with the filmmaking, the plot is also enclosed but has a harsher challenge of making its perspective equally absorbing. The rules and world-building efforts feel murky and obtuse, which impedes the stronger emotional connections that could be made. The control of the plot seems entirely lost by the end, and the clashing of a grounded survival drama with intense supernatural horror isn’t naturally compatible. The basic construction of the script works well enough, but it struggles to make anything outside of this one-room more stimulating.

With such a small group of actors to watch, the performances this cast gives become of extreme importance to the film’s overall success. McCormick carries herself well as a decent anchor, and while not having too many instances to shine, she does a credible job at portraying the internal conflicts. In all honesty, Healy’s cantankerous outbursts can be grating, but they feel appropriate for the role, and he does manage to convey some authentic vulnerabilities that are well earned. Shaw probably has the best turn as the matriarch who radiates an inviting energy that genuinely sells the more devastatingly poignant scenes this family unit suffers through. Not much is asked of Cornin, but he delivers an adequate performance nonetheless. All of them have good chemistry with each other and work together to portray this flawed family that faces one catastrophe after another.

There is a certain longing for “We Need to Do Something” to reach a higher level of quality that it ends up evading. There are strong choices made in the filmmaking that keep one invested, the relationships between the characters are well played, and the unfolding mystery within the story presents an interesting puzzle that serves the narrative. At the same time, the ideas embedded within come across as underdeveloped and stunt the impact such a tale could have. Despite the impressive aura of anxiety, the storytelling stops short of being something truly miraculous. The final product is entertaining enough, if not the best example of this restrictive horror subgenre.