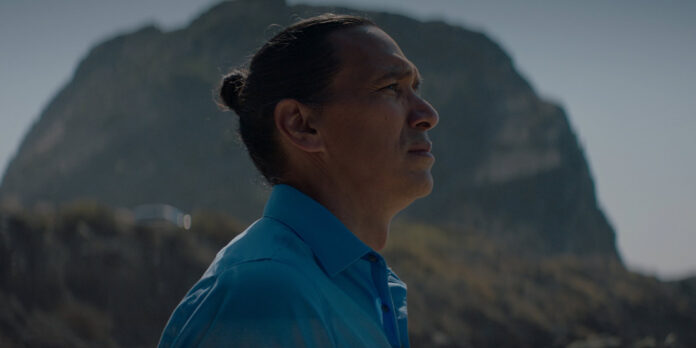 THE STORY – Makwa, a young Anishinaabe boy, likes to escape his troubled life by playing with his friend Ted-O. One day, Makwa shockingly murders a schoolmate, and the two boys cover it up. Now as adults, the two men must come to terms with what happened.

​When seeking out stories that attempt to be inclusive, one hopes for the presence of perspectives with a history of marginalization to be brought to the foreground. It’s always a welcomed opportunity to have voices contribute to the diverse landscape of storytelling that may not have been given such a platform in the past. However, within this framework is another interesting phenomenon that can occur. While it is vital to see films that spotlight these viewpoints, it can be just as enthralling to see such commentary play secondary to the larger character study. When one can flavor a narrative with specific community traits while also maintaining a strong central plot, that can be truly worth celebrating. “Wild Indian” manages to accomplish this feat to varying degrees, carried to the end by some powerful performances and compelling craft.

The film starts off in 1980s Wisconsin, where young Makwa (Phoenix Wilson) is trying to survive the brutality of his home life at the hands of his abusive parents. His frustration reaches a boiling point one day when, after playing with a rifle belonging to his cousin Ted-O’s father, he murders a classmate in cold blood. The two boys end up burying the body and swear to conceal their crime. Cut to several decades later, Makwa is now known as Michael (Michael Greyeyes) and is a successful businessman living in California with a wife and child. Ted-O (Chaske Spencer) has just been released from prison after issues with drug offenses. Crippled by his guilt, Ted-O goes to seek Michael out and confront the demons of his past, which will also force Michael to make his own decisions with dire consequences.

It’s nearly impossible not to be immediately transfixed by the performances at the heart of this film. Greyeyes embodies a somber complexity to his role that is reflexive of the internal torture he struggles through. It’s a quiet turn that does well to mask the sharp intensity that can lash out. Being able to switch from reserved to dangerously threatening makes him a captivating figure. He delivers an outstanding performance, though Spencer might be even better as a man who’s lost so many years of his life and is looking for redemption. He carries an immense sadness with him, which often leads to bursts of heartbreaking emotion that is astounding to witness. His portrayal is one that feels earnest in its remorsefulness, and Spencer conveys the tragic qualities to perfection. These two actors are the most obvious standouts in a cast with capable players, though some do not make much impact. Wilson has an effective brooding quality that compensates for some wooden delivery, and Kate Bosworth, as Michael’s wife, has very little to do. Jesse Eisenberg also turns up briefly in a role that he feels miscast to the point of distraction.

Lyle Mitchell Corbine Jr. has a deft hand at directing this material. He creates an intimacy with the tactile and inviting characters, casting a chilly yet engaging lens on the story. With a moody score draping every scene, one feels drawn to dissect this world that examines how many must grapple with their cultural identity and move between different facets of society. The filmmaking encapsulates this notion with an undercurrent of foreboding dread that punctuates every moment and heightens the tension.

Corbine’s directorial efforts are much more appreciated than his screenplay, however. While the script does provide the foundation for good characters, there’s a slight emptiness that feels pervasive. The inciting incident occurs too quickly before the jump in time, and the introduced mystery element is not particularly intriguing. This partly feels by design to give the themes more of an importance, but at just under 90 minutes, this is one instance where the runtime could have been longer to give more breathing room. As is, the story feels a tad underwhelming when compared to the more specific ideas being mined. That tactic rushes through the plot mechanics at a pace where it’s difficult to become truly invested.

There certainly are flaws to “Wild Indian” that make it less than a perfect film. The brevity of the screenplay actually works against the thematic exploration, and it also gives way to underwritten characters that serve little purpose beneath the surface. At the same time, there is much appreciation for the filmmaking at hand to create an intimate character study, and with two exceptional performances in Greyeyes and Spencer at the helm, there is plenty to be moved by. It’s a valiant achievement to bring a unique context to a grounded tale, and one can only hope for more examples in the future.