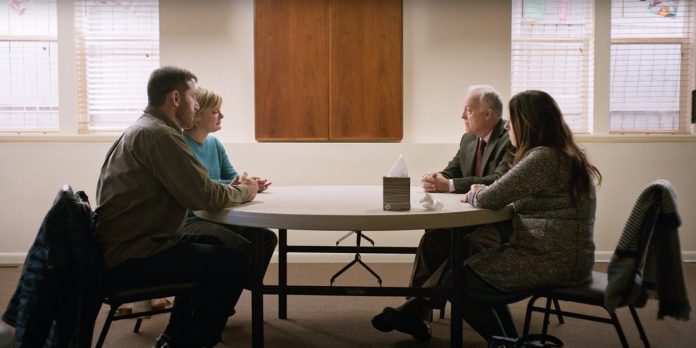 By Matt Neglia
​
Bleecker Street has released the trailer for “Mass” starring Jason Isaacs, Ann Dowd, Martha Plimpton & Reed Birney. The film premiered earlier this year at the Sundance Film Festival to some of the best reviews of the festival and will be released in theaters on October 8th.
​
​Click below to see the trailer.

​Plot Synopsis: Imagine the most dreaded, tense, and emotionally draining interaction you could find yourself in and multiply it by 10. That is exactly what two sets of parents—Richard (Reed Birney), Linda (Ann Dowd), Jay (Jason Isaacs), and Gail (Martha Plimpton)—are facing. Years after a tragedy caused by Richard and Linda’s son tore all their lives apart, Jay and Gail are finally ready to talk in an attempt to move forward.

What do you all think of the trailer? As of today, this is still my favorite film of 2021. Constructed like a play and showcasing the talents of four extraordinary actors front and center, “Mass” is a powerful experience that doesn’t rely on any gimmicks to tell its story. It’s simply four actors in a room, with a patient and emotionally devastating screenplay, under the steady hand of director Fran Kranz (The stoner character from “The Cabin In The Woods” making his directorial debut). I don’t want to reveal too much (and the trailer doesn’t either) as I believe this film holds immense power from watching how the drama slowly unfolds. The work by all four actors will go down as four of the best performances of the year, and the screenplay deserves serious consideration in the Oscar race as well. The film would also be up for Best Picture and Best Director in a perfect world, but we’ll see how things shake out. Bleecker Street has never inspired much confidence in me when it comes to their campaigns for awards, but if there was ever a film for them to try harder than ever for, it’s this one. It’s a long season ahead and for such a small movie like this, it will need all the help it can get. Let us know your thoughts though in the comments below or on our Twitter account.