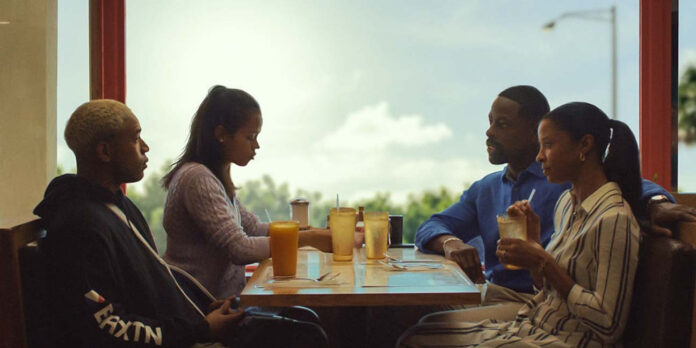 THE STORY – The future is bright for Tyler (Kelvin Harrison Jr.), who seems to have everything he needs: a wealthy family to support him, a spot on the high-school wrestling team, and a girlfriend (Alexa Demie) he’s head over heels in love with. Committed to greatness and under intense scrutiny from his father (Sterling K. Brown), Tyler spends his mornings and nights training. But when pushed to the limit, cracks in the perfect façade of Tyler’s existence start to show, and the stage is set for a true American tragedy.

​​​​​Trey Edward Shults exploded onto the independent filmmaking scene with the dark family drama “Krisha.” He then followed that up with the even darker family drama “It Comes At Night.” Now, only three films in and he might just have a masterpiece on his hands with his third dark (but surprisingly sometimes hopeful) family drama “Waves.” In terms of his command of the art form, he has truly ascended to a new level here. The writing is more nuanced. The direction, more mature. And the editing is more patient. In other words, Shults’ third film is an overwhelming emotional powerhouse, filled with great performances, thought-provoking ideas, heartbreaking story developments and perhaps best of all, the power for us to realize that we can heal through love.

Tyler (Kelvin Harrison Jr.), is a high-school teenager living in Southern Florida with his financially successful suburbian family lead by his stern and tough father Ronald (Sterling K. Brown). Ronald has continuously pushed Tyler to succeed in life,  and the young kid has done so, taking great care of his body and becoming a well-regarded mat wrestler in school as he prepares for college. The family unit is strong and everyone is supportive of each other. However, a fateful night, fueled by a series of bad decisions, results in a destructive loss for the family, one which they might never recover from.

Standing as possibly the most magnificent exploration of toxic masculinity we have ever seen, “Waves” is all about how those behaviors and attitudes can lead to broken homes and broken lives. Even for this fairly successful family, who have achieved so much through hard work (as Ronald tells his son at one point in the film “Because the world does not give a shit about you…so you have to work ten times as hard”), it can all be taken away, just like that. There are sometimes identifiable reasons as to why such unfortunate and tragic circumstances befall people and sometimes it is random and arbitrary. There are no easy answers. All that’s left in the wake of such devastating heartbreak, is to figure out how to deal with it and move forward.

“Waves” is divided into (almost) two halves. There is a certain moment halfway through which propels the narrative of this family into unspeakable territory. However, right when most filmmakers would choose to end their film, Trey Edward Shults keeps on pushing the story forward. After such a devastating mid-section, the horror ends and now the aftermath and the healing begin with a third act that left us all utterly breathless due to its patience, emotional maturity and universal message of love above hate. It’s completely unexpected but so emotionally rewarding. Be sure to bring tissues.

There are so many truly fantastic performances in “Waves” it’s hard to single any one of them out. Kelvin Harrison Jr. continues his hot-streak in 2019 after the critically acclaimed “Luce” with an even darker role that will surely hit too close for some. Sterling K. Brown makes an impressive leap from television to film with a difficult role. He must teeter between being stern with his family and being emotionally vulnerable and caring. Those switches are always believable and 100% rooted in truth over who Ronald is, what kind of man he is and why he chose to raise his family the way that he did. The second half of the film is dominated by Tyler’s sister Emily (an astonishing Taylor Russell) and her boyfriend Luke (Lucas Hedges in a brief but emotionally naked role). The two of them give emotionally gut-wrenching performances that earn our sympathy and belief that there is hope in the face of such dark times and that forgiveness is possible. Alexa Demie and Renée Elise Goldsberry round out the cast with smaller but still important roles as Tyler’s girlfriend and stepmom respectively. Each of them also brings deeply rooted performances to their characters. There is seriously not a single weak link amongst this cast and Trey Edward Shults takes his time with his storytelling in an effort to make sure that they all have their big moments leading to a complex and rich film.

While it may not be the musical come were hoping for early on, the score by Trent Reznor and Atticus Ross is haunting, beautiful, textured, layered, mesmerizing and completely unforgettable. There is also a song by Thom Yorke which plays out in the third act to memorable effect. The sound work is also highly imaginative by Johnnie Burn, as he balances out the various hip-hop music tracks and score to heighten the dramatic headspace of the characters during certain scenes. The cinematography by Drew Daniels is magnetic, as the camera creatively moves through the space early on and then becoming more static as the film enters its second half. Much like the performances, there are so many stunning frames from “Waves” it would be hard to pick any single one out as the best. And the editing by Shults and Isaac Hagy is so intricate and well thought out, as evidenced by the creative transitions they use to keep the story moving forward. Sometimes it is done with waves of color swooshing across the screen and sometimes it is done with fades to black. There’s even a deliberate aspect ratio change when the entire world of these characters changes that is bold and brilliant.

Shults’ latest and greatest is a film about so much. But at the end of the day, it’s about the very essence of who we are as people. Who we should strive to be. Despite all of the terrible events we will encounter in our lives and sometimes (hopefully not) from those closest to us, we must still find it within ourselves to find acceptance of those horrible truths through love. It’s the only way we can push forward. Otherwise…what is the point? We need to take those waves as they come. Sometimes you’ll ride them, other times you’ll crash. But no matter what, they’ll keep on coming. All that matters is whether or not you want to get back in the water.