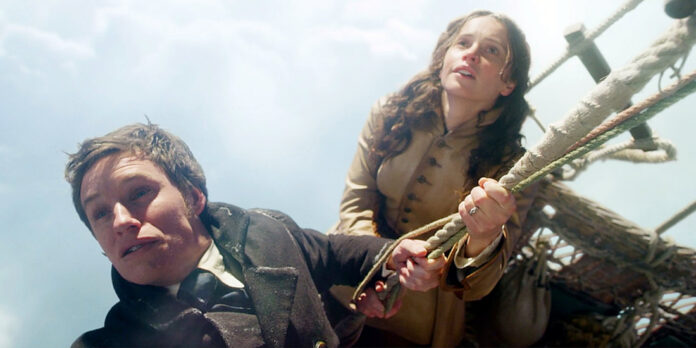 THE STORY – In 1862 headstrong scientist James Glaisher and wealthy young widow Amelia Wren mount a balloon expedition to fly higher than anyone in history. As their perilous ascent reduces their chances of survival, the unlikely duo soon discover things about themselves — and each other — that help both of them find their place in the world.
​
THE CAST – Felicity Jones, Eddie Redmayne, Phoebe Fox, Himesh Patel, Vincent Perez, Anne Reid, Tom Courtenay, Tim McInnerny & Rebecca Front

​The sky is certainly the limit for director Tom Harper after he gave us the terrific independent film earlier this year “Wild Rose.” He’s back now with his biggest effort yet. A gorgeous epic that reaches for the stars but never quite gets there, “The Aeronauts” finds Tom Harper working on a larger canvas than he ever has before. With tremendous technical work from the crew and two likable leads in Felicity Jones and Eddie Redmayne (reuniting after their Oscar-winning/nominated work in “The Theory Of Everything”), “The Aeronauts” is a crowd-pleaser that will surely dazzle audiences despite some narrative misgivings.

James Glaisher (Eddie Redmayne) wants to predict the weather. It’s 1862 and no one is interested in meteorology and thus, his project to take a gas air balloon higher than anyone has ever gone before, cannot get funding. In comes pilot Amelia Rennes (Felicity Jones), a woman who has something to prove to herself after the passing of her husband. The two initially clash over their desire to survive and their desire to answer questions that have never been answered before. Flying over 30,000 feet into the air, the two face unpredictable weather, equipment malfunction and more, as they each discover something about themselves along the way.

As stated before, Tom Harper’s technical craftsmanship on “The Aeronauts” is refined and well-executed by all of his departments. The costumes are colorful and eye-popping. The visual effects are dazzling. The cinematography is breathtaking, with a few wide-angle shots of the balloon hovering over the clouds and other elemental moments that call back to “Life Of Pi.” The score by Steven Price is epic and grand in scope. The sound work is thrilling, especially when dealing with the weather elements. The third act in particular highlights some great makeup as the characters deal with sub-zero temperatures. And the stuntwork is jaw-dropping, as the third act features a number of moments that will make those afraid of heights queasy. All of these elements make for a very cinematic experience. So why does “The Aeronauts” deflate before it can really soar?

There are three main issues I have with the movie and each of them informs the other. The first is that the film has a very quick pace, clocking in at under two hours. It’s not even 10 minutes into the film that our two lead characters are dealing with their first storm in the sky, without any emotional investment from the viewer as to who they really are, why they are there and why should we care? The next issue that comes along with that is the heavy-handed dialogue, filled with self-importance and emotional weight, deprived of all subtlety. My guess is because the film does not have a long enough runtime to pad things out, we’re stuck with these forced lines that almost come across as laughably bad if it were not for the two strong performances from Jones and Redmayne (particularly Jones). And the final issue is the narrative structure, which is told in a series of flashbacks as the balloon makes its ascent over the course of an hour and change. Had this film been told in a linear fashion, there’s a chance that there would’ve been a greater degree of emotional investment, but we’re left instead with having to play catch up with the film’s rhythm as it continuously moves onward.

While “The Aeronauts” may not be a soaring success for this particular reviewer, I suspect it will still play well with audiences. As I watched Harper’s latest, I found myself checking my watch every time a graphic displayed across the screen highlighting how long Amelia and James had been in the air. Not because I was bored necessarily, but because I couldn’t shake the coldness I felt towards the movie’s emotional journey due to its failure to grip me earlier. So, while “The Aeronauts” has its ambitions set high, much like the journey the characters go on, there are bumps and obstacles along the way.