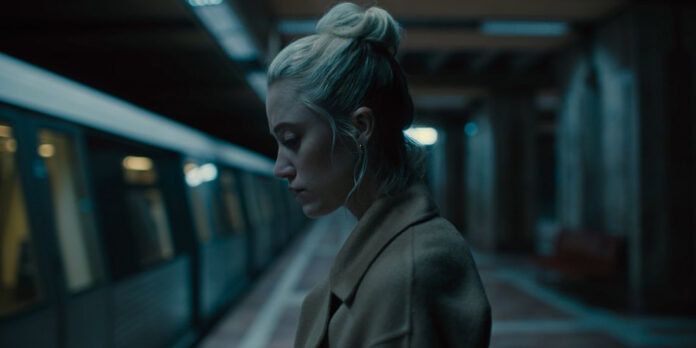 THE STORY – As a serial killer stalks the city, a young actress who just moved to town with her boyfriend notices a mysterious stranger watching her from across the street.
​
THE CAST – Maika Monroe, Karl Glusman & Burn Gorman

What’s worse than an actively lousy film? A profoundly average one. “Watcher” is a dime-a-dozen voyeurism thriller that doesn’t add a single new angle to the time-tested formula it operates within despite stylish direction and a captivating performance from Maika Monroe. You’ve seen this movie before, and while this does not do anything necessarily better or unique with its premise, if you’re looking to get creeped out to the point of looking over your shoulder constantly the next time you’re walking down the street, then maybe “Watcher” will be the ideal film for you.

“Watcher” follows Julia (Maika Monroe) as she navigates a new home in Romania. Her loving but busy husband, Francis (Karl Glusman), works all the time, thus leaving Julia alone at home in a strange new country with no friends or family to comfort her anxieties. To top it all off, she’s stuck in her apartment with the sinking feeling that the serial killer currently stalking the city streets might be her neighbor, Daniel Weber (Burn Gorman), who lives in the apartment directly across from her.

Making her feature directorial debut, Chloe Okuno avoids the leering male gaze that often permeates voyeuristic films (I’m looking at you, Brian De Palma) and effectively places us in the tortured headspace of Julia. Her confidence behind the camera lends itself well to the film’s haunting visual aesthetic, which induces a substantial amount of paranoia and dread. She’s aided by cinematographer Benjamin Kirk Nielsen who provides crisp, effective image compositions throughout. However, outside of these finely crafted elements, there’s really nothing else to see here that can’t be found in a million other thrillers of its kind.

The added feature of Julia living in a city where she doesn’t speak the language, so she can’t communicate with most of those around her, enhances the tension somewhat. Still, overall, we’re getting the same plot beats we’ve become accustomed to. Tell me if this sounds familiar; “Am I imagining this? I’m definitely not”; “I’ll tell people, but they’ll think I’m crazy”; “I’ll confront the stalker”; “The stalker provided a pretty rational explanation for their creepy behavior”; “Just kidding! I was right – they’re evil.” The story plays out exactly as you would expect, with only Monroe’s performance and Okuno’s steady if dull hand guiding us. Once we finally see the killer in action, he’s implausibly sloppy, opening the door for an unlikely and abrupt ending that shockingly undercuts any goodwill built up earlier by Monroe and Okuno.

Even worse, the film’s execution of its paranoia and thriller elements never reaches beyond mildly thrilling. As stated before, the lighting and framing are effective, but the film doesn’t have enough meat on its bones to feel particularly scary or distinctive enough to set it apart. Monroe is developing a niche for herself by playing characters who are stalked by creepy shadowy figures (see her excellent turn in “It Follows”). She continues to impress as an actress, showcasing her characters’ fear and descent into madness while also demonstrating a firm bit of resilience. Burn Gorman (“Game of Thrones”) is equally compelling as the mysterious man across the street. He looks menacing but also seems sad and as lonely as Julia, raising doubts about whether or not he is a killer in both her and the audience’s minds.

Classic cinema fans will appreciate references to classic thrillers like “Charade” and “Rear Window,” but more than anything, they highlight “Watcher’s” own shortcomings. Chloe Okuno’s feature debut doesn’t really add anything new to a genre that has seen its fair share of paranoid protagonists battling their anxieties, only to see them manifest with a need to be conquered in reality. It feels destined to fall into obscurity among many other unmemorable late-night thrillers. Okuno does display some skill in the director’s chair, and Monroe is a talented actress, but they needed better material to make this worthwhile.