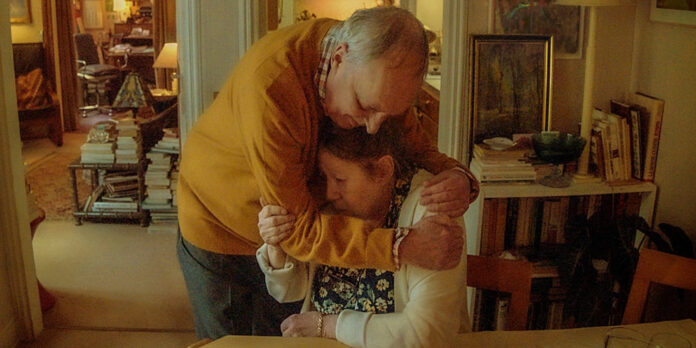 THE STORY – A retired psychiatrist with dementia and a struggling author with a heart condition live their final days together in an apartment.

​​​​As a filmmaker, Gaspar Noé has always forged his own path. Through his unique aesthetic sense, Noé has demonstrated his an almost unparalleled capacity to shock audiences with each passing film, whether it be the psychedelic trip of life after death in “Enter the Void,” the drug-induced paranoia within a dance troupe in “Climax” or, most disturbingly, the brutal sexual violence against women in “Irreversible.”

What’s shocking about Noe’s latest film, “Vortex,” is that, at first glance, nothing is shocking about it at all. His central focus is on a couple in their 80s just going about their daily life in Paris. Nothing to see here, right? But this is Gaspar Noé, so rest assured, an audience’s anxiety level will soon be raised. Father (Italian giallo director Dario Argento) is an older film critic currently writing a book linking cinema and dreams, while Mother (Françoise Lebrun of “The Mother and the Whore”) is a retired therapist who now spends her days in their Paris apartment. We first meet the couple as they are enjoying a glass of wine on the balcony, looking out at the city beyond. Yes, Father may be self-absorbed and Mother a little dotty, but they seem as normal as anyone’s grandparents.

However, one night, when Mother gets out of bed, Noé breaks the film’s frame in two, with one screen following Mother as she wanders aimlessly around the apartment while the other screen captures Father still sleeping. As we watch Mother encased in her own world, not quite knowing where she is, anyone who has seen a similar moment in their own family will recognize the early throes of dementia. When Mother’s decline becomes too evident to ignore, son Stephane (Alex Lutz) pleads with his parents to give up the apartment and move to an assisted living facility, a request that falls on deaf ears — a dilemma with which too many children of aging parents will easily identify.

The mother/father/child/dementia dynamic is no doubt familiar to many moviegoers as the same premise as Michael Haneke’s Oscar-winning “Amour” a decade ago. So why would a filmmaker as risk-taking and innovative as Noé take on material so similar to that which such a recent film handled so successfully?

The difference lies in the approaches of the two artists. Haneke, for example, takes a hyper-focused view, burrowing in on character — as Emmanuelle Riva’s world in “Amour” draws more closed in as her dementia worsens, so does Haneke heighten the claustrophobia for us, making watching her dilemma more difficult to bear. However, Noé opens up his world with the use of the split-screen, offering different perspectives of others living their lives as Mother suffers alone. He never uses it as a gimmick but instead as a tool to reveal the claustrophobia visually that Mother feels as her world begins to shrink. Noé never has to tell us that verbally — we can see it as her life is now confined in her own box, a move as chilling as anything in “Amour.”

Noé’s use of his split-screen to capture the routineness of everyday life does, however, come at a price. Whether it’s Father wandering around their apartment or occasional glimpses of Paris life just outside the door, there are too many times when those moments feel irrelevant or repetitive, making the film’s already overlong 142-minute runtime feel even longer. Yet, just when you’re tempted to give up on “Vortex,” Noéoffers us something — a moment, a gesture, a character revelation — that pulls us right back, reminding us that, no matter how exasperating his style may be at times, there’s a real artist at work here whose vision helps to bring the challenging subject matter of “Vortex” to rich, vibrant life.