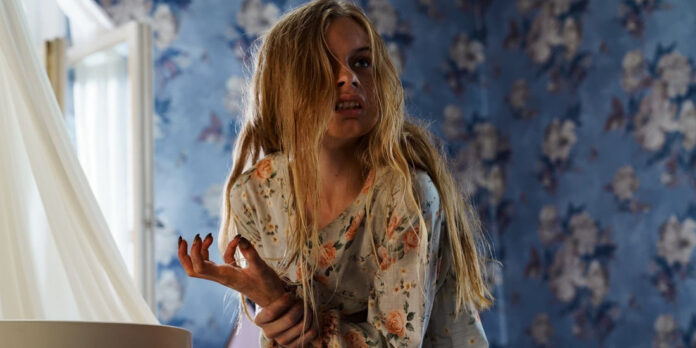 THE STORY – Tinja is a 12-year-old gymnast who’s desperate to please her image-obsessed mother. After finding a wounded bird in the woods, she brings its strange egg home, nestles it in her bed and nurtures it until it hatches. The creature that emerges soon becomes her closest friend and a living nightmare, plunging Tinja into a twisted reality that her mom refuses to see.

​​​Tucked inside a colorfully pink Finnish home is a picturesque family that is always laughing, smiling, and playing together. Tween gymnast Tinja (Siiri Solalinna) gets her stretching in. At the same time, her rambunctious brother Matias (Oiva Ollila) runs around and plays with mom (Sophia Heikkilä) – selfie-stick in hand – and dad (Jani Volanen). You really couldn’t find a more perfect, happy family, and the matriarch of the home loves sharing all of these wonderful moments on her blog “Lovely Everyday Life.”

Well, at least that’s what the videos show. Once the camera turns off, the true nature of this home comes alive in every toxic way possible. Hanna Bergholm brings to life the most hellish things about growing up and trying to please everyone in her feature directorial debut, “Hatching.” This thriller finds an original way to show what it literally means to crack under pressure and the consequences it has on everyone.

That picturesque version of this family is what viewers are first introduced to, but it all falls apart when a bird literally crashes their party. Everything in this immaculately designed home breaks and tumbles (the production design is stellar) as the bird flies around the room until the mom, whose name is never revealed, snaps its neck with a smile. Tinja is then instructed to throw the bird away in the organic waste bin. Soon after, the idyllic facade of this family begins to rot. The videos on the mom’s blog are so heavily staged as she touts this perfect life online, all the while having an affair and pushing Tinja so hard with her gymnastics until her palms bleed.

In the meantime, Tinja goes to retrieve the bird – which ends up in the nearby woods – and discovers its egg. She brings it back home, where she keeps it warm and watches it grow to an unbelievable size. Once it hatches, a winged creature, which she names Alli, emerges but slowly begins to change in its appearance as true intentions come to light.

The trajectory of this bird’s story is pretty obvious, but Bergholm and Ilja Rautsi keep us entertained nonetheless. Tinja realizes that this creature is an extension of her and her deepest desires, and it’s fun to watch her try to control and stop it from doing some wild things. As the stakes get higher, the teenage anger is too much to bear for Tinja, and hell hath no fury like a preteen bursting at the seams. Bergholm and Rautsi also, thankfully, don’t skimp on the mother’s story. While other films would have made her a two-dimensional character without any exposition, we learn more about her through her affair and the feelings of unhappiness that she might be harboring inside. The same can’t really be said for the male characters in this story. It’s true that the narrative doesn’t revolve around them, but they really aren’t given a whole lot to do.

“Hatching” tackles the coming of age story in an exciting way, even if this particular film might creep you out occasionally. Though it goes into the body-horror genre, you’re still able to relate to its core theme of a young person trying to do their best. Sometimes it feels like the world will fall apart if you don’t do everything right, and Solalinna really gets into those emotions that are so familiar to us all. But in those moments, it’s comforting to know that no one is perfect and everyone makes mistakes.