“a taste of hunger” 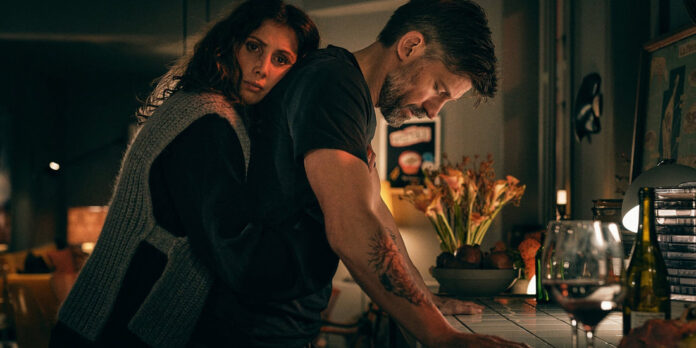 THE STORY – A power couple within the Danish gourmet scene run the popular restaurant Malus in Copenhagen. The couple is willing to sacrifice everything to achieve their dream: getting the coveted Michelin star.​

​​​It would be easy to pepper this review with food metaphors, and there’s a good chance that some unintentional cooking puns may make it past the editing phase. After all, “A Taste of Hunger,” the new film from director Christoffer Boe, is centered around the high-stakes world of fine dining restaurants. But despite this elite setting, the story being told is so universal in its drama that it could happen anywhere in the world where kitchens are found. Unfortunately, although it boasts some polished visual direction and an atypical structure, the drama never quite ascends to a level of supreme gourmet cinema, satisfied instead to merely be a serviceable meal of a film.

Maggie (Katrine Greis-Rosenthal) and Carsten (Nikolaj Coster-Waldau) are a power couple in the Copenhagen restaurant world, running a cutting-edge eatery called Malus, where Carsten is the head chef, and Maggie is his muse, adviser, and confidant. Their collaborative partnership proves fruitful as Malus earns great acclaim. But one mark of success that still eludes them is the legendary Michelin star – one of the most tangible marks of quality in the world of food. For Maggie, in particular, this pursuit becomes feverish to the point that it begins to lead her down dark paths.

As the married duo at the film’s center, Greis-Rosenthal and Coster-Waldau are a tantalizing delight. Their chemistry burns like an unattended frying pan. Greis-Rosenthal brings a fascinating inner life to Maggie, injecting pain and surprising playfulness into the character. These levels of humanity are essential to keeping the audience invested in Maggie’s journey, even as the initially altruistic goals of her actions become more and more unclear. And Coster-Waldau never turns off a simmering dark energy underneath Carsten’s charming exterior, allowing occasional bursts of frightening anger to poke through in an intimidating and magnetic way.

The film opens with Carsten working on a new dish as Maggie watches. She tries a bite and then makes the brilliant decision to deconstruct the complicated meal and invite the customers to assemble it themselves in a piecemeal fashion. As the two of them put it, this would “Let the guests assemble the dish and take it in,” allowing the chef to “let go of control.” This glimpse into their creative process also serves as a meta preview of how the film itself will tell the couple’s complicated story. Rather than following a linear boy-meets-girl romantic build and fall, the film jumps sporadically through time and forces the audience to put the pieces of the doomed romance in order themselves. This unconventional structure allows for surprising parallels and repetitions throughout the turbulent relationship to reveal themselves in ways that the characters may not even recognize.

Unfortunately, this intelligent construction choice is the only aspect of the film that gives it a semblance of originality. While its well-worn story does call to mind the types of engaging adult dramas commonly made in years past, particularly by Hollywood in the 1970s, the stakes often feel pretty low. Outside of how the story is told, this is a fairly standard marriage-on-the-rocks tale that never reveals anything too profound or makes any new observations about the difficulties of marital relations.

Still, it’s slickly directed and well-shot, with the lighting standing out as particularly worthy of praise. And while the dual performances that the movie is mixed around may be intriguing enough to make this film worthwhile, overall, “A Taste of Hunger” is missing the satisfying flavor of a complete cinematic dish.