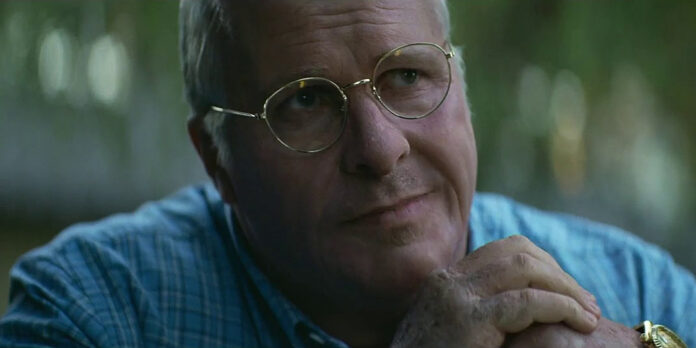 THE STORY – Gov. George W. Bush of Texas picks Dick Cheney, the CEO of Halliburton Co., to be his Republican running mate in the 2000 presidential election. When Bush becomes victorious, Cheney uses his newfound power to help reshape the country and the world.

​​​​In 2015, Adam McKay made a significant change in his career going from directing hit comedies such as “Anchorman” and “The Other Guys” to becoming an Oscar winner for writing and directing “The Big Short” which examined the 2007 financial crisis from the angle of the housing market. The style he showcased in that film shocked many, with quickly paced editing, many breaks of the fourth wall, voice-over narration and characters (or celebrity cameos) explaining the more intricately detailed parts of the crisis directly to the audience in a way that the average viewer could understand. In his follow up film, “Vice,” McKay is once again giving us a history lesson so that we can understand how a man, who by all accounts, should never have been allowed to be granted as much power as he was, became the most powerful government official in American history…and he wasn’t even the President of the United States.

Governor George W. Bush (Sam Rockwell) of Texas has decided to pick Dick Cheney (Christian Bale), the CEO of Halliburton Co., to be his Republican running mate in the 2000 presidential election. “Vice” explores how an unassuming man with no trajectory into politics suddenly got involved in Washington D.C. serving under President Ford as Chief of Staff in the 1970s, then later in Congress, Secretary of Defense after that and eventually as the Vice President of the United States. It’s considered a “thankless job” by Cheney but when he sees an opportunity to run the country in the shadows under George W. Bush as the face and puppet of the administration, the opportunity to put his friends and interests in a position of power becomes too good for the Republican politician to pass up.

Anyone who was not a fan of McKay’s new found style with “The Big Short” will find little to enjoy here. Satirical breakouts into Shakespearean dialogue, rigorously edited montage sequences, a mid-credits fake-out scene that is both the funniest and most horrific moment of 2018, characters constantly taking a break in the story to explain the intricacies of the American government to the audience and a few not so subtle moments of dialogue (which take direct stabs at the current American Presidential administration) and visuals (Dick Cheney’s literal black heart). McKay is operating on all cylinders here and for some, “Vice” will be seen as a preachy, liberal mess of a movie which tries to cram in too much story and events for its own good. However, I believe it works both as a piece of entertainment (to lure those who don’t typically watch that many movies into its claws) and as a cautionary tale. There are more camera setups here than most mini-series contain (And maybe that’s what this should have been but I digress). The wonderful score by Nicholas Britell and haunting cinematography (this time by Greig Fraser) all show McKay’s growth as a filmmaker. He is a brilliant man, there is no doubt about it but “Vice” is not a subtle film. It’s very clear in its intentions and is sold brilliantly by its colorful cast led by the phenomenal Christian Bale.

We’ve seen Bale undergo physical transformations before. We’ve seen him pack on muscle to play Batman, lose weight to play a drug addict in “The Fighter” (for which he won an Academy Award for Best Supporting Actor) but in “Vice” he is completely unrecognizable. Packing on 60lbs for the role, wearing layers of makeup, changing his voice and channeling every mannerism from the real Dick Cheney that he possibly could, there is no doubt that Christian Bale is one of the greatest actors of our generation. He completely disappears into the role as Dick Cheney that by the time we get to the end of McKay’s exhausting film where Cheney talks directly to the audience to deliver a bone-chilling monologue of condemnation, it’s hard to believe that Bale and Cheney are two different individuals. It’s a tour-de-force performance that is steely, vulnerable, terrifying, strong and comedic but never tragic. McKay never lets us forget that this guy is the devil despite showing the more humanistic qualities of the man in regards to his relationship with his family, specifically his gay daughter played by Allison Pill and his wife Lynne Cheney.

As convincing as Bale is, it’s Amy Adams’ “Lady Macbeth-like” performance as the woman behind Cheney that helps to give the film it’s humanistic drive and thrust. Where “The Big Short” was scattered amongst many different characters over different parts of the country, “Vice” follows a linear progression of this married couple who were on the verge of a breakdown but after an Oscar clip moment where Lynne gives Dick an ultimatum to turn his life around, it’s off to the races and on to the White House from there. However, Amy Adams never fades into the background as Dick’s power in Washington begins to rise. She is equally as strong, ruthless and captivating as Christian Bale and it’s because of the two of them that “Vice” is able to stay on a straight course despite all of McKay’s flourishes. They are rounded out by a strong ensemble cast which includes a “who’s who” of recognizable actors including Steve Carell as the despicable Donald Rumsfeld who acts as Cheney’s mentor in the early stages of his political career. Fresh off his Oscar win last year for “Three Billboards Outside Ebbing, Missouri” Sam Rockwell plays George W. Bush as a complete buffoon to comedic delight and Jesse Plemmons (who acts as the film’s narrator) does a great job keeping the audience engaged and focused on McKay’s wildly ambitious script in a role that is best left as a secret but is a stroke of brilliance once you understand his significance.

More ambitious than “The Big Short” but more concentrated due to its focus on one character’s journey into the hell that he created in the country we all know and love, “Vice” will certainly not be for everyone. However, I have to admire McKay’s growth, brilliance and cinematic style that he has carved out for himself which he can proudly call his own. Anchored by a towering performance from Christian Bale, the ensemble delivers his wise-cracking script with both comedic and devilish charm. These are unlikable characters who did truly awful things which the country is still feeling the ramifications of and can be repeated again should the wrong people simply reach out and take that power for themselves. If “Vice” is able to alert even the most average of moviegoing watchers to the horrors that await us should any other politician ever be as bold as Cheney was, then McKay will have done his job.